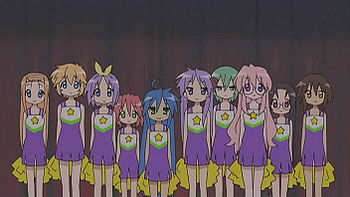 Introducing all (but three of) the girls from Lucky Star! From left: Ayano, Patricia, Tsukasa, Yutaka, Konata, Kagami, Minami, Miyuki, Hiyori, and Misao
Get to know the characters from the high school Slice of Life anime and manga series Lucky Star.
Advertisement:

(To avoid Name Order Confusion, note that is this a Given Name-first character sheet.) 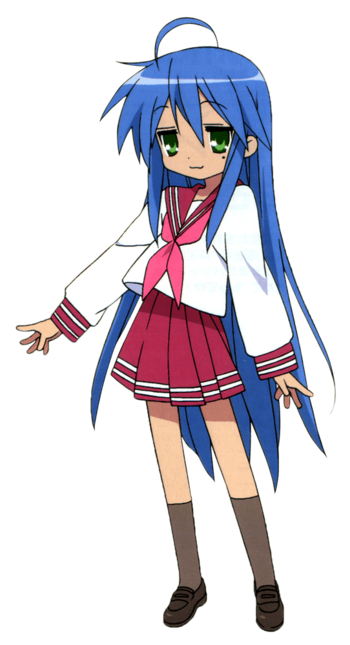 A diminutive high schooler who's much more interested in video games, anime and manga than doing actual schoolwork. Her interest in popular culture is truly staggering.

Konata's closest friend and Tsukasa's older twin sister. She is easily angered by some of Konata's more..."playful" antics, but always seems to be the one who understands her hobbies. While she's nowhere near Konata's level of geekiness, she does enjoy scrolling shooter games and light novels.

Kagami's cheerful and very loopy younger twin sister. She's actually very good at home chores and cooking, although she sometimes has to ask for Kagami's help because she forgets things easily.

The "smart girl" of the main quartet and embodiment of many stereotypical meganekko traits, including a very polite manner of speech (even amongst her friends).

Yui's younger sister who comes to live with Konata (her cousin, though she often sees her as a sister) after she's accepted into Konata's high school. She's a frail but cheerful girl who looks even younger than Konata does despite her age. Her friendship with Minami often falls into Pseudo-Romantic Friendship territory.

Entering the story by returning Yutaka's handkerchief in the beginning of what can be seen as a Pseudo-Romantic Friendship, Minami is a quiet, expressionless girl often misunderstood by others to be creepy. Good at most subjects, and is childhood friends with neighbour Miyuki since both of them love reading.

Yutaka and Minami's classmate, member of the Animation Research Club, and doujinshi yonkoma mangaka with a habit of shipping game characters already, as well as Minami and Yutaka.

American Otaku in Yutaka's class, and the most genki of otakus of this series. 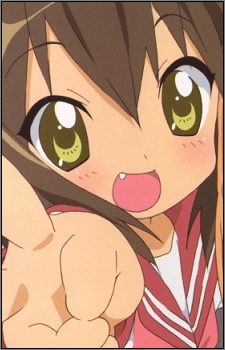 Kagami and Ayano's classmate for five consecutive years, Misao is the latter's childhood friend and, as defined by the former, an unorganized "lazy ass". A recurring theme in post-anime strips is her rivalry with Konata — for Kagami, even Misao considered Kagami as being cold-hearted. 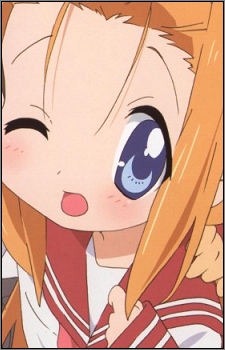 Misao's "caretaker" (in Kagami's words) for years to the level that when Kagami was fed up with Misao or vice versa, Ayano is their go-between. She is the only teen in the series with a boyfriend.

First appearing in Volume 4, Kō is the president of the Animation Research Club and Hiyori's "boss" on the club's periodicals. She's the only 11th grader in the series. Does not appear in the anime, but she did appear in the Net Idol Meister video game. 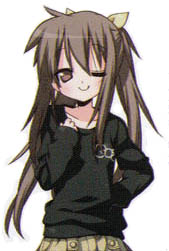 While she doesn't appear often in the manga, she gets introduced with Ko often. She's a close friend of Kō, and in the visual novels gets possessed by an alien at one point and even has some leftover powers remaining. 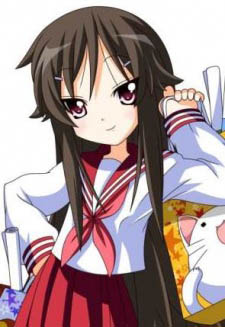 Class Representative of Hiyori's class who appears in Volume 7. She is also an otaku, but tries to hide it as she is an upper-class girl who is class president. However, she runs into Hiyori on one of her shopping trips to Comiket, who discovers her secret. She is good at home economics, but is bad at art. She likes "cute" things and likes sweets, as well as coffee and milk. 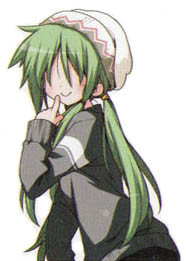 Another girl who appears in Volume 7, and another member of the Animation Research Club.

Yet another girl who appears in Volume 7, and yet another member of the Animation Research Club.

Konata, Tsukasa and Miyuki's homeroom teacher, and world history teacher for all the seniors. Has lots of free time to play video games and watch baseball games. Still believes in the power of corporal punishment. 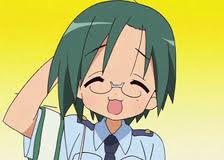 Konata's cousin and Yutaka's older sister. She works as a traffic cop, but even Konata wonders why can she keep at that position. Despite her flightiness, she shows real care towards her younger sister Yutaka. Has an offscreen husband. 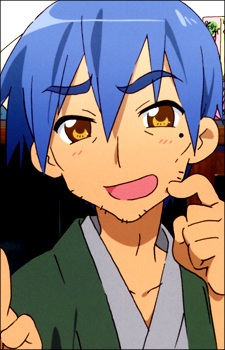 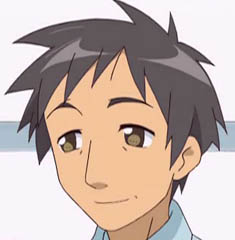 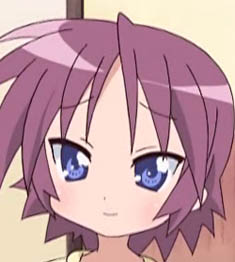 The eldest of the Hiiragi sisters. 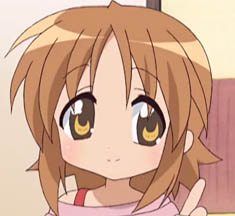 The second eldest of the Hiiragi sisters. 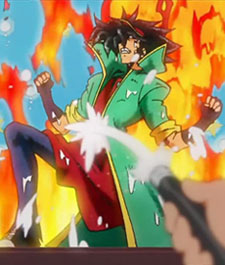 An anime-only character, he is the manager of the Animate store Konata frequents. He reveres Konata as "Legendary Girl A", and frequently tries (and fails) to get her to buy merchandise from his store.

He is actually the mascot for the Animate chain as Captain Animate, created by Shimamoto Kazuhiko in the late 90s; but the one who made him known in Japan was none other than Hideaki Anno who directed a short Original Video Animation for the character, a Radio Show was also made. Anisawa was made to help boost the sales and pick interest of the general public into buying anime merchandise, not just for Animate stores.

Miyuki's mother, who is just as cuddly, adorable and innocent as her daughter — but not as smart.

Konata's deceased mother who looks just like Konata. Despite a bit wary about Soujirou's comedic lolicon tendencies, she still considers him to be actually caring for her — something nobody else will associate with Soujirou.

She should be listed in the category below; Shiraishi entered Lucky Channel because she was elevated to the "main show" in volume 5. She's Kagami's homeroom teacher, specializes in biology, and is the advisor for the Animation Research Club. Heterosexual Life-Partners with Fuyuki. Only has one short cameo in the anime's last episode.

Also introduced in volume 5 of the manga, Fuyuki is Ryouou's school nurse and is Heterosexual Life-Partners with Hikaru. Does not appear in the anime, but like Ko also appears in Net Idol Meister. 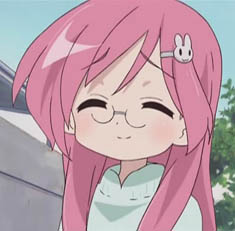 The elder of an impoverished pair of sisters. She is the reason for their poverty, as she spends too much money on manga and doujinshi—while just working as a bookstore staff. 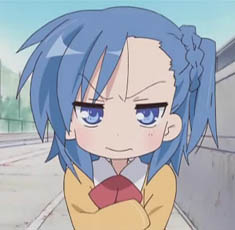 The younger of an impoverished pair of sisters. An elementary schooler, and thus the youngest Lucky Star character. 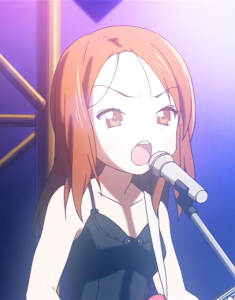 Voiced by: Herself (JP)

A lead singer during "Performance of Haruhi" in Episode 15.

Historically speaking, Lucky Channel predates Lucky Star. It is the name of the readers' column for Comptiq, the magazine in which Lucky Star is serialized.
Akira Kogami 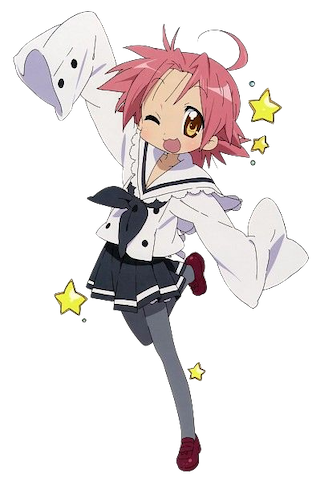 An Idol Singer in the Lucky Star universe and "navigator" of Lucky Channel. She's fourteen — younger than most of the cast — but has eleven years of acting experience. In Comptiq, she's the face of the magazine's reader column, where her name would be used to reply to readers' mail. 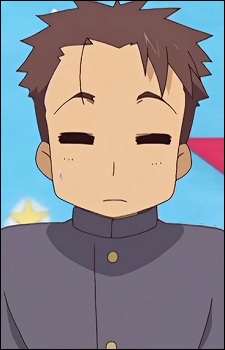 Voiced by: Himself (JP) and Sam Riegel (EN)

Minoru Shiraishi is an anime-exclusive character with two roles: "Sebastian", a random student in Konata's class, and Akira's henpecked assistant in Lucky Channel. 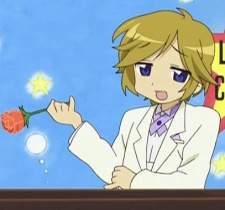 Voiced by: Himself (JP) and Johnny Yong Bosch (EN)

Daisuke Ono is an anime-only. In episodes 20 and 21, he replaces Minoru as Akira's assistant in Lucky Channel.

Yuko Goto
Voiced by: Herself (JP) and Megan Hollingshead (EN)

Yūko Gotō is an anime-only. In episode 23, she comes in to break up Minoru and Akira's fight.