The King, the clan heroes, and minor characters of Armello. Heroes are categorized by the two starting heroes, the Usurpers, and the Rivals in that order (with the exception of the Bandit and Dragon Clans, who were respectively bundled together).

The King of Armello

Before the fall, before the Rot.

Armello will always be MINE!

He used to be The Good King. Unfortunately, the King has since been taken over by The Corruption, causing his health to deteriorate, kicking off the heroes' bid for the throne. 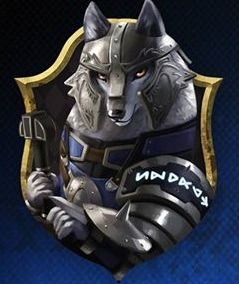 Thane Greymane, Keeper of the Hakonsbane
Unmatched in armed combat, Thane is a natural predator.

Thane is the heir to the Wolf Clan, and a skilled swords...er, wolf. He seeks to claim the throne to prove his worthiness as a leader to his (now-deceased) father.

If I don't stop the King, who will? 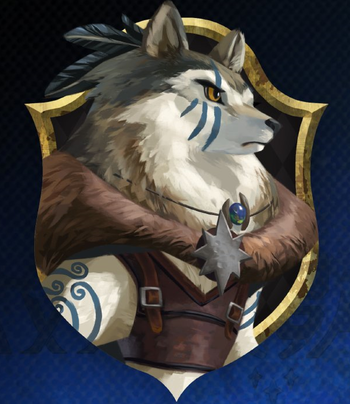 The Ranger of the Veil
As deadly as she is resourceful.

A wandering ranger of the Wolf Clan, River is an enigma. Her reasons for seeking the throne of Armello are known by her only.

Come on! I won't let a King destroy Armello! 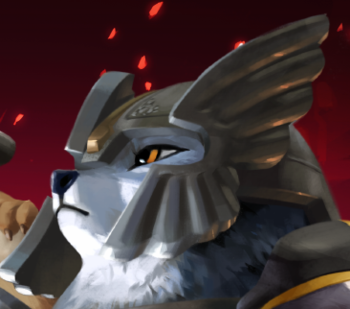 Standing on her own far above any station.
Leader of the Wolf Clan's most zealous warriors. Immovable.

Brawniest of Armello's heroines, Magna seeks to prevent the destruction of Armello at the hands of a king and believes that the time for the reign of a Queen has come. 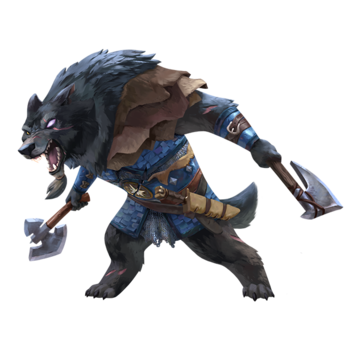 My kin abandoned me. You’re not even kin.
The exiled heir to the Wolf Clan throne. Savage and scorned.

Fang is Thane's older brother who was exiled from his home prior to the events of the game. With one Rot-infected eye and a pair of bloodied axes, he has set his eye on taking his rightful place as leader of not only the Wolf Clan, but also of the kingdom itself.

I am Mercurio. I don't lose. 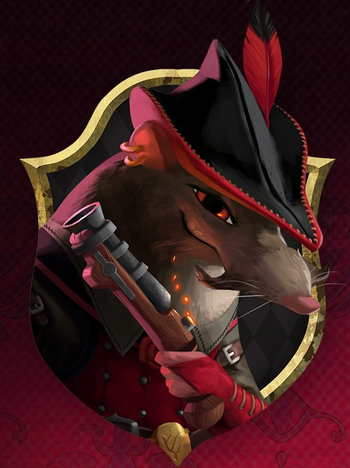 A trusty mustache, the bedrock of a perfect disguise.
Master of subterfuge and trickery with a flashing blade.

A cunning and flamboyant rogue, Mercurio has a few skeletons in his closet. The question is if he seeks the kingship to atone for those, or is it simply a bid for power?

I'll take the throne or lie dead at its feet. 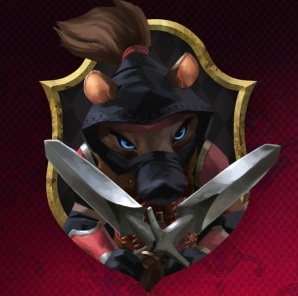 The Night Mother's most lethal veiled hand.
A deadly assassin with an edge for the opportunistic kill.

The most loyal assassin and servant of the Night Mother, Zosha seeks to become queen in her name. Although the "her" there may refer to either the Night Mother or Zosha herself...

This time. Next time. My rise is inevitable. 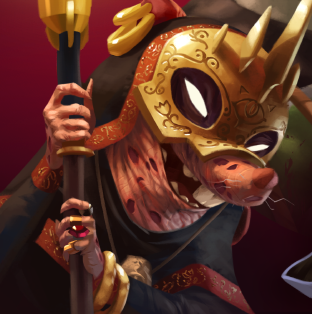 The lord of the Veil, the lord of Death.
The horror whose trade is secrets beyond the veil.

An old, blind rat who knows and has seen more than any creature in Armello can hope to see. For him, his rise to power is an inevitability. 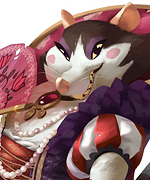 I won’t allow this!
A devilish, double-crossing rat with double the personality.

The fourth hero of the Rat Clan to be introduced, Griotte is a rodent with two very distinct personalities that appear in the day and during the night respectively.

If I fail the Wyld, all will be lost. 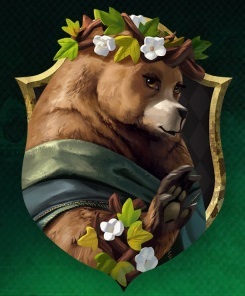 Through her, the Wyld sings.
At one with the Wyld, spell casting is Sana's natural talent.

A priestess of the Wyld, Sana seeks to cleanse Armello of the Rot. And since the King is a major source of the Rot, her course is clear: she must slay the King.

Either I break, or they do. I won't be broken. 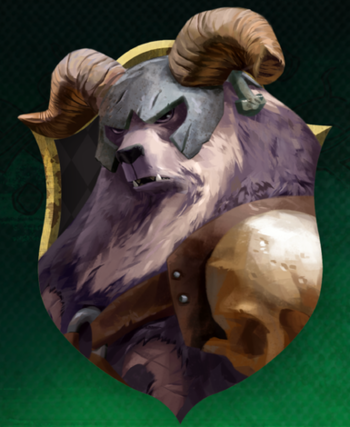 The titan the Clan's betrayal produced.
The Wyld fuels this wrecking ball of a bear.

An exile from the Bear Clan's ancestral home, Brun now seeks the throne in defiance of those who banished him.

Keep going, or I can never go home. 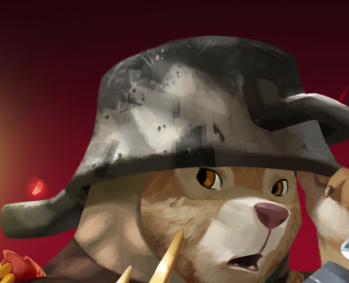 Struggles at putting a great defense together.
A simple bear, with a serious affinity for forests.

He may be simple and prefer to be alone, but do not mistake those as traits that would keep him from pursuing the throne like everyone else.

Don’t let another fool rule.
A curious old crone, dedicated to the ways of the Wyld... whatever the cost.

A peculiar specimen from the Bear Clan, the elderly Yordana traverses across Armello with spoon and cauldron in hand. Fate is malleable for her when in tune with the Wyld's cycle. 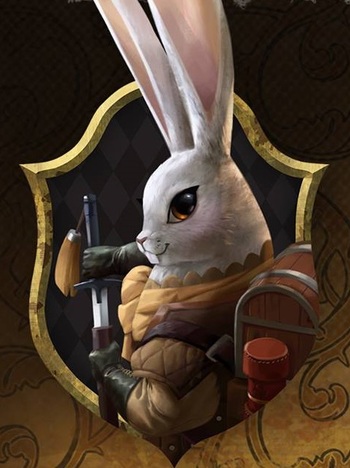 Far beyond the plains now.
A general all-rounder with a hefty coin purse to boot.

An adventurous noble of the Rabbit Clan, who attempts to fulfill her clan duty by becoming Queen. And if she gets to explore a few ancient ruins along the way, so much the better.

I have to win! It's only fair! 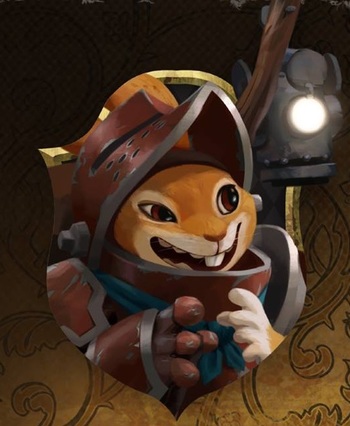 Just liked the flag.
A kid genius who's as resourceful as he is excitable!

One of the most talented tinkers of the Rabbit Clan, Barnaby is a prodigy for his young age. Beyond his smithing, however, he's all energy and no sense. So of course he just had to attempt to become King. 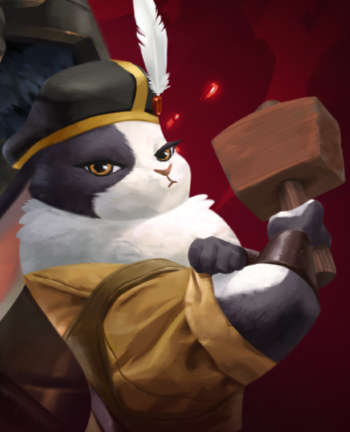 On every build, for every bolt and bale.
A master builder with a reputation for getting the job done.

She can build fortifications by ending her turn on a settlement. It costs other heroes an additional AP to move into a fortified settlement. 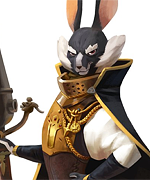 I’ve got lead with your name on it.
Once atop Rabbit nobility, a decorated general with a dangerous dash of senility.

If you pay attention, you can feel the pride radiate from this old buck. Unfortunately for those who dare get within range of his cannon, he is a lagomorph with remarkable aim.

A fox sold to bandits as a youth, she fought her way up and unified all of the bandits into a fearsome army with only one goal: the throne of Armello.

A knight never backs down. Nor will I.

A former knight in service of the King and Knight of the Order of the Rose, he was kicked out because he dared to speak his mind. Aware of the King's illness and insanity, he seeks to put an end to it once and for all.

Enough blood. It's up to me to end it.

A young squirrel thief, formerly of the capital city of Armello. When her guild was wiped out by the King's guards, she fled. But she vowed to return...

Remember them Sylas. Take your revenge!

A former fisherman, Sylas's village was massacred, all because he poached a fish. The only thing left for him is the whispers of vengeance against the King that haunt his mind.

A cunning monitor lizard, high priest of the Dragon Clan.

Likely the oldest creature in Armello, this ancient warrior still holds her oath to the Worm.
"I will watch this king fall, like a hundred others."

A truly ancient tortoise warrior, sworn to the service of the Worm.

A member of the elite sect of Druid Hunters, she is the perfect weapon against the Wyld.
"I cannot rest while filth survive."

A vicious inquisitor of the Worm, out to purge Armello of the Wyld's influence.

An illusionist devoted to the Worm who is as crafty as he is paranoid.
"I am devoted, I am worthy, I am CHOSEN!"

A hyperactive gecko magician who believes himself to be divinely favored, the chosen servant of the Worm.

A mysterious and easily distracted individual, he regularly seeks out heroes and joins them in their quest, regardless of if they want him along or not.

The Flavor Text for Pride's Edge, the King's sword, reads:

From worlds beyond, this lion's bite. With teeth of steel and eager fight.
— The Stranger, Our Saviour 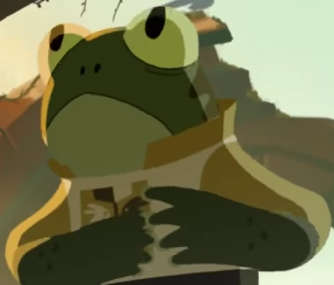 A frog squire, allied with the Rabbit Clan. Is shown in the "Horror And Heroes" trailer. 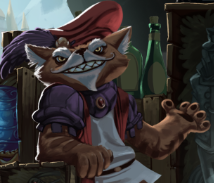 A potential follower and master of the in-game shop for microtransactions.