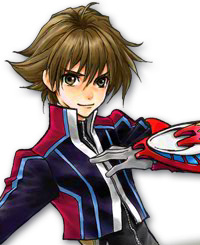 "If an adult has to hurt someone, even to save the world... I'll just be a kid!"
Voiced by: Tetsuya Kakihara

A young boy who wants to either save the world, become a grown-up or help Kohaku, depending on his mood. He has a very powerful sense of empathy which allows him to connect with just about anyone, both literally (via Soma Link) and metaphorically. Despite this, he can be quite a clueless dork in some cases, such as Beryl's flirting.

He uses the Soma Asteria, a sword-and-shield combo, and his favored elements are Light and Thunder. He mainly uses sword techniques, and is one of two party members without inherent spells. 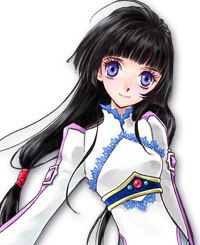 "I believe you. A bad person couldn't use a Soma anyway."
Voiced by: Marina Inoue

A girl on the run from a mysterious and powerful sorceress. Her Spirune — the core of her Spiria — is shattered early in the game, reducing her to an emotionless doll. The first act of the game revolves around the party's quest to restore her to normal by traveling the world and finding the missing pieces of her Spirune. She is kind and energetic, but a little clumsy with people.

Her Soma, Rondeau, is composed of an anklet and a flaming baton. She fights using martial arts, combining baton strikes with kickboxing. She also possesses several elemental (primarily fire) and healing spells. 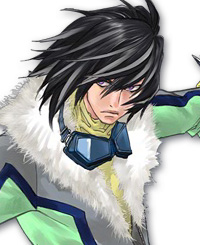 "Yeah, I'm scared all right, but not of you. I'm scared that my sister and all these monkeys with me are gonna get hurt."
Voiced by: Masaya Matsukaze

Kohaku's older brother and hot-blooded antithesis. He's fiercely protective of his sister because they lost their mother at a young age. Late in the game, he strikes up a relationship with Lithia Spodumene.

His Soma is Gale Arc, a wind-elemental double-bowgun bequeathed by Ines. He is also the primary healer of the party, combining healing techs with powerful projectile attacks. 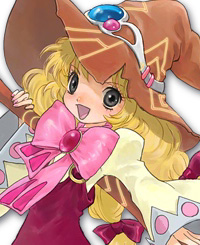 "My painting isn't about "adventures" or "heroes" any more. It's about "things you can't fight". Shing, you're perfect for it!"
Voiced by: Saeko Chiba

A childlike girl whose ambition is to become an Imperial Painter. She's eighteen years old, but looks and acts a lot younger, frequently slurring long words and using her immaturity to get her own way.

Her Soma, Terracotta, is a hat-and-paintbrush set. She mainly casts earth and water-elemental spells, and also wields supportive magic. 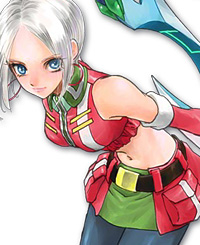 "An adult is someone who does what's necessary, even if it hurts."
Voiced by: Shizuka Ito

The beautiful manager of the the traveling Soma shop "Every Day is a Peaceful Day"/"Wanderlust". She has superhuman strength and several contacts as shifty as she is. She is (mostly) composed and graceful, and often ends her sentences with "I wonder?" ("~kashira?").

Her Soma, Folseus, is a pair of greaves and a huge axe-like blade. Her element is water, but she has few techniques that utilize it, choosing to instead specialize in artes that enhance her abilities and deliver powerful blows to the enemy. 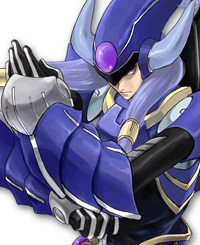 "Now requesting... negative. Please, I ask of you... everyone, in order to protect Master Richea, please lend me your power!"
Voiced by: Hozumi Gouda

ID Code IS206-mark-11 Jack-type Mechanoid, and Guardian Knight to Lithia Spodumene. He insists that his only motivation is to serve his master, but many times he shows a hot-blooded or kind side of his personality, especially when dealing with Lithia or Kohaku. As he gradually realizes his own nature, he gains titles to match, starting from "Cold-blooded Mechanoid" and ending with "Like Human".

His Soma, Vex, incorporates katars on his arms and extra blade arms mounted on his back. He also uses offensive dark and wind type magic and can cast debilitating spells. 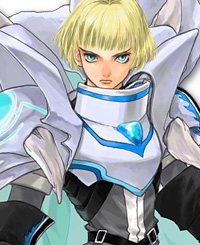 "If you would bear the weight of the world on your shoulders, I will hold you up."
Voiced by: Hiroshi Kamiya

Captain of the Valeia Church Crystal Knights 13th Unit, also called the Chalcedony Squad. He begins as a Crystal Knight who wants to capture Kohaku's Spiria under the orders of his father, one of the people who fought Creed seventeen years before the game began.

His Soma, Wahrheit, is a breastplate that produces large wings as well as a BFS. It was formerly used by Iola Hearts, mother of Hisui and Kohaku.

He is promoted to playable party member in ''Hearts R''. 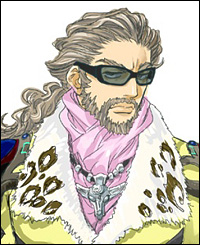 "The strength to fight for someone even if you're aware you can't win: that is the strength which forges Spiria."

A new character introduced in Tales of Hearts R. Galando is a veteran Soma Master who lost both his wife and daughter to Despir Disease. Believing that Kohaku's unique strain of Despir Disease may hold the key to eradicating the sickness once and for all, he joins Kor and Hisui on their journey to cure her.

His Soma, Astore, is a set of shoulder pauldrons from which he can draw and dual-wield an axe and sword. He can also control the axe like a boomerang for medium-range attacks. 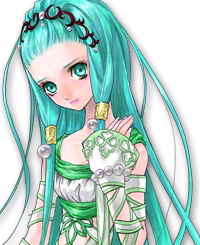 "Believe in yourself. These feelings are yours, and yours alone."

A mysterious girl residing within Kohaku's Spiria. She matches the description of the girl in the nursery rhyme, "The Sleeping Princess of the Forest of Thorns". 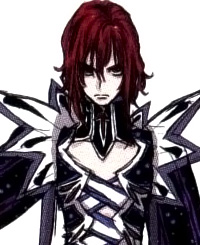 One of the last survivors of the Quartz race, Creed is at the centre of events in Tales of Hearts and is the games primary antagonist. 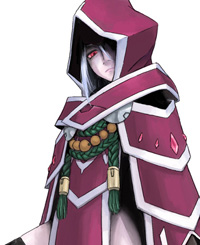 A mysterious sorceress who is chasing after Kohaku Hearts. She murders Zex Meteoryte, shatters Kohaku's Spirtune and does everything in her power to piss off Kor and stop the party from reuniting the Spirtune pieces. 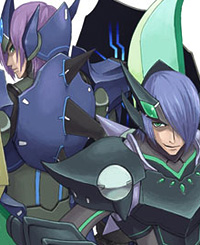 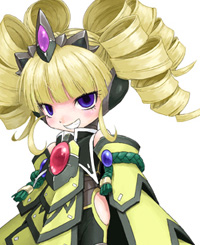 A Robot Girl who serves as the Villainous Harlequin of Creed's faction. As a Joker-Type mechanoid, she's designed more for practical use and data-gathering rather than battle. She's obsessed with gathering information, and is driven more by curiosity than anything else. 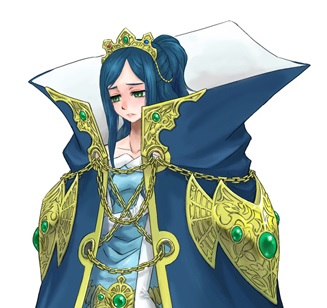 Chalcedony's subordinates and official Crystal Knights of Squad 13. They start off antagonistic, but are slowly revealed to have a familial relationship with their captain.

Tropes associated with the squad: 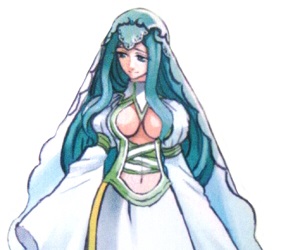 Lithia's elder sister and the original inventor of Soma and the Cinderellion/Mysticete. She grew up with Creed and Lithia in Wonderidel, but was opposed to their plans.