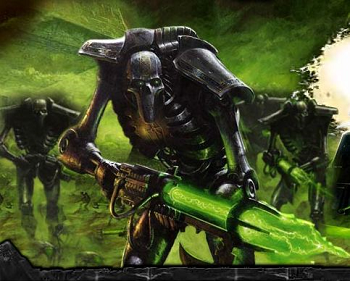 They can't be bargained with. They can't be reasoned with. They don't feel pity, or remorse, or fear. And they absolutely will not stop, ever, until you are dead.
"Throughout human history, we have been dependent on machines to survive. Fate, it seems, is not without a sense of irony."
— Morpheus, The Matrix
Advertisement:

For added atmosphere, listen to this

The most frightening thing about a Bug War or any other kind of humans-vs-aliens battle is the threat that humanity may be wiped completely from the map; that billions of years of evolution and thousands of years of civilization may be rendered meaningless by unstoppable Death from Above. The beauty of the Robot War is that it is laced with an extra layer of irony: the machines that want to Kill All Humans were created by that very species, and they've Turned Against Their Masters. The human species, which has used technology and ingenuity to dominate the planet, has actually assured its own destruction by creating something even more powerful and intelligent than itself, even though it knows that A.I. Is a Crapshoot. Thus this is a very common theme in futuristic "And Man Grew Proud" stories.

Of course, not all Robot War stories have to use human-created machines; there are plenty more that feature robots from another world. But these stories still remain effective because of the schism between biological life and robotic life - probably the only creatures that can ever be truly alien before Starfish Robots even come into play.

If it's an individual robot on a rampage, expect it to be a Murderous Malfunctioning Machine. Often caused by AI being a crapshoot and/or Mechanical Evolution, and as such can easily overlap with The Singularity. With respect to the meatbags or rustbuckets there may be some Fantastic Racism on show. Expect to see Mecha-Mooks and Mechanical Monsters in legions. Expect Guilt-Free Extermination War to show up. Of course, a Robot War will always involve robotic soldiers.

Not to be confused with the British remote-controlled-robots competition Robot Wars. Or the Japanese Turn-based Humongous Mecha Massive Multiplayer Crossover Super Robot Wars games (one example was mentioned below), for that matter. Or fictional wars with robots fighting each other.