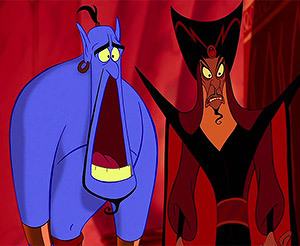 Most frequently observed in Western Animation, though it also occurs in other media as well. A character becomes surprised or shocked, and their jaw drops comically, oftentimes with the sound of a saucepan for the comedic cherry on top. This is done to ridiculous extents in some cases (where the jaw drops to the floor and sometimes even an Overly-Long Tongue rolling out, as seen with Genie in the image on the right), but also sometimes within a reasonable human limit (as seen with Jafar). The former can be either pure Rule of Funny or justified by the character having supernatural powers or superhuman flexibility.

On occasion, another character will reach over and close the dropping character's jaw.