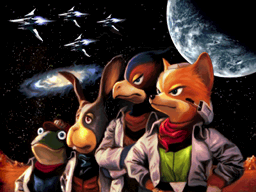 Birthed from Shigeru Miyamoto's love of Thunderbirds and a need to show-off the 3D rendering capabilities of the Super FX chip, Star Fox* The first two game were known as Starwing and Lylat Wars in PAL territories, due to perceived issues with the German company StarVox

is a long-running Nintendo Sci-Fi space shooter franchise that began in 1993 on the Super Nintendo Entertainment System, starring a group of ragtag Funny Animals who are fond of flying spacecrafts known as Arwings and spouting lines that quickly enter Memetic Mutation.

The series takes place in the Lylat System, wherein lies the planet of Corneria, kept safe by General Pepper and the Corneria Defense Force. Of course, this military group can't handle every galactic threat that comes their way and finds themselves having to regularly enlist the help of some benevolent mercenaries. Enter Star Fox, consisting of Fox McCloud and his friends Falco Lombardi, Peppy Hare, and Slippy Toad. Together, they assist the Cornerian Army in battling the vile Mad Scientist Andross, their villainous counterparts in Star Wolf, and various other threats to their quadrant of the galaxy... all for a small fee, of course. Gotta pay for food and repairs somehow.

As of 2019, there are eight games in the franchise. The series has also undergone two separate continuity reboots, resulting in three distinct continuities with their own sequels. Most entries in the franchise are rail shooters, though most titles have experimented with everything from the Third-Person Shooter to Turn-Based Strategy genres, alongside the traditional gameplay.

Other major gaming appearances for Star Fox characters outside their own series include:

In addition to video games, Star Fox has made appearances in comics and animation. With the former, there are two notable comics series based on the series: the 1993 Nintendo Power Star Fox comic strip that served as a canonical retelling and expansion of the original SNES game's plot, written and authored by Benimaru Itoh,note who also illustrated the licensed Japanese strategy guide

and Farewell, Beloved Falco, a 2002 interquel manga released on the Japanese Star Fox Adventures website that covers the events that occurred between 64 and Adventures, while focusing mainly on Falco's background and his relationships with other characters. There's also this German comic

from 1997 that adapts the plot of Star Fox 64, released by Nintendo of Europe. As for animation, there's the animated short Star Fox Zero – The Battle Begins,

an adaptation of the first mission in Star Fox Zero produced by Wit Studio under Miyamoto's supervision.