Besides the Gods and Jötnar, Norse mythology is also home to plenty of other sapient beings (elves, dwarves, valkyries and many others). This page mostly deals with characters from these races, but it is also used for regular mortal humans.

open/close all folders
The Stranger 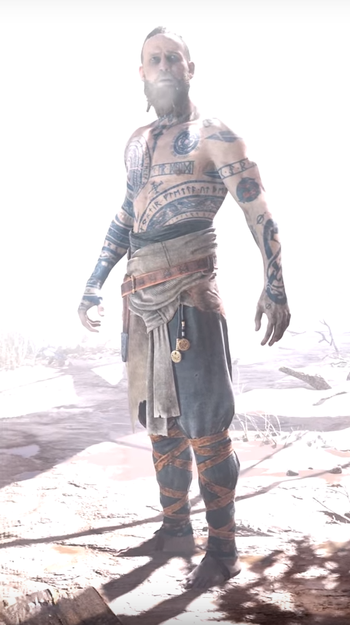 "Long way from home, aren't you?"
Voiced in English by: Jeremy Davies
Voiced in Brazilian Portuguese by: Silvio Giraldi
Voiced in Japanese by: Tooru Sakurai
Voiced in Russian by: Dmitry Krivoshchapov
"Throw whatever you have at me, I'll keep coming! That old body will give out. But before I end this, I want you to know one thing: I can't feel any of this!"

A mysterious man that knocks on Kratos's door, seeking answers. However, his aggressive attitude quickly turns the encounter into a fight, more difficult than Kratos expects as the Stranger is exceptionally strong, and shrugs off and heals every wound.

The Witch of the Woods 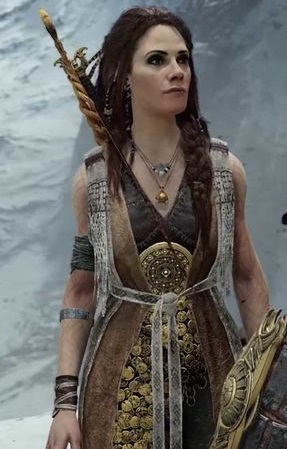 "I know you're a god. Not of this realm, but there's no mistaking it."
Voiced in English by: Danielle Bisutti
Voiced in Brazilian Portuguese by: Beatriz Villa
Voiced in Japanese by: Kikuko Inoue
Voiced in Russian by: Yulia Churakov
"What you were before doesn't matter. This boy is not your past, he is your son. And he needs his father."

A solitary but friendly witch that lives in the wilds that meets Kratos and Atreus when they wander into her territory hunting a magic boar that happened to be her friend. She provides support and healing to Kratos and his son throughout the game. 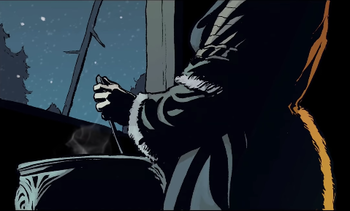 Faye in the digital comic prequel.
Click to see spoilers : 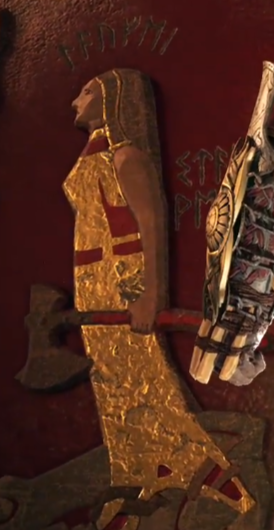 "Faye...what do I do? Our son is not ready to carry your ashes to the top of the mountain...and neither am I. I do not know how to do this without you."
—Kratos

Kratos's second wife and Atreus's mother, whose final request before her untimely death was for her husband and son to scatter her ashes from the highest peak in all the Nine Realms. 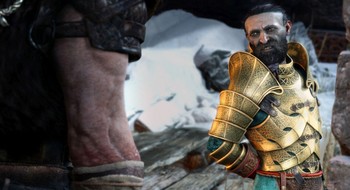 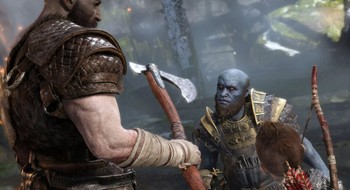 The Huldra Brothers, they are a pair of dwarves that help Kratos and Atreus during their adventure by improving their weapons and equipment with the right materials. 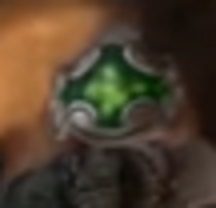 A dwarf who lived under a waterfall and had the power to change himself into a fish at will. He had a magical ring Andvaranaut, which saved his life and helped him become wealthy. 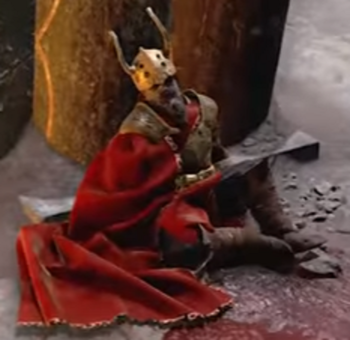 The progenitor and first ruler of all dwarves. 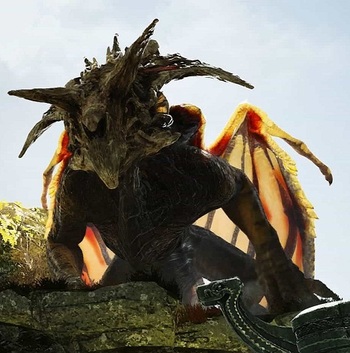 Fafnir as a dragon.

A greedy dwarf who stole treasures from others and kept them all to himself, which eventually turned him into a dragon.

A dwarf renowned for building a maze in the deadly mist realm of Niflheim, full of traps and treasure. His workshop has valuable items, in particular, the Mist Echoes and the legendary Mist Armor. 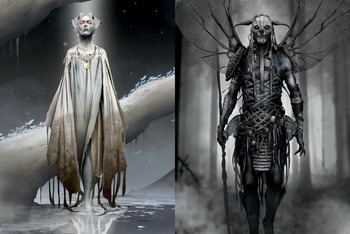 The non-hostile race of elves encountered at Alfheim. When Kratos and Atreus arrive at the realm, they are on the losing side of a war. 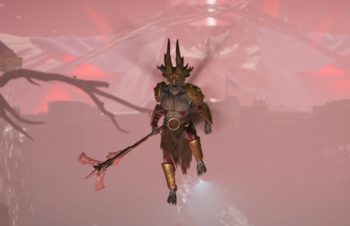 The king of the Dark elves, he leads them during the war against the Light Elves in hopes of taking control over the sacred Light of Alfheim. While he was initially victorious, his plans were thwarted by Kratos and Atreus. 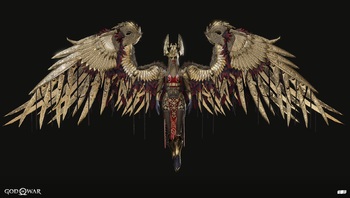 Sigrun, Queen of the Valkyries.
Voiced by: Lani Minella (Sigrun)
Atreus: Father, these are Valkyries! They're the ones who keep the dead from overrunning Midgard!
Kratos: Then they are terrible at their job.

The Valkyries are spirits serving Odin who take the souls of the worthy to Valhalla. Their task is crucial as they cull the souls and stop Helheim from being overrun with the dead. By the time of the game, Kratos encounters the Valkyries in a physical and corrupted form, making them ravenous and violent creatures while preventing them from performing their duties. Kratos can fight them, liberating their spirits and investigate the cause of their corruption.

The nine Valkyries encountered are:

When speaking with a ghost on the Lake of Nine's coast, Kratos and Atreus get a chance to be reunited with Faye if they find and gather all the remains of the ghost's beloved sorceress who was executed because of her knowledge in Seidr magic. 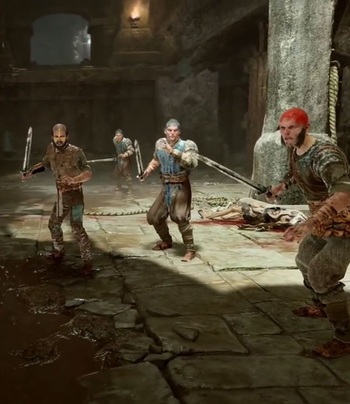 Cannibal: "We'll have to keep them alive. Strip off their meat... a little at a time."

The cannibals, also known as Reavers, are a group of humans that appear as minor enemies in God of War (2018).

Wayward Spirit: "I can't remember the last time I saw something walk these islands that wasn't dead or corrupted."

The lost souls of deceased humans that are found throughout Midgard and cannot pass to the afterlife. They are basically quest-givers that serve as optional side missions, therefore if Kratos and Atreus help these spirits, they will award the player with loot and useful items. There are also similarly lost souls walking in Helheim, however, they do not interact with the protagonists whatsoever.

A squirrel who runs up and down the world tree Yggdrasil to carry messages between its many different inhabitants. Atreus learns to summon him to find health and rage pickups... which, as indicated by how the skill's name is Bitter Squirrel, he's not happy about. 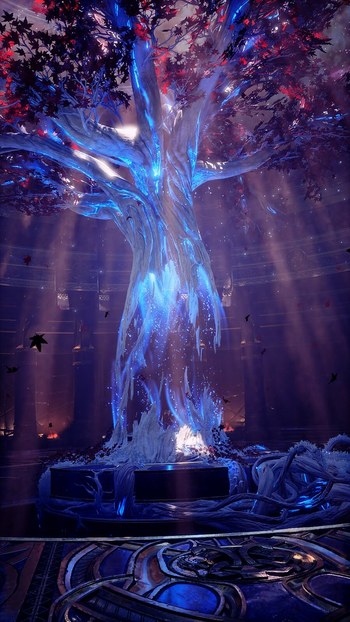 "The tree nourishes our soils. The dew from its leaves feeds our valleys and rivers. The tree's very existence supports all of creation along its boughs. It's life energy interwoven into the tapestry of life... birth, growth, death, and rebirth."

The sacred and divine Yggdrasil is a massive yew tree, believed to be the center of the Norse cosmos. Each of the Nine Realms exists among the branches and roots of the tree, with the tree itself existing in the Realm between Realms. Within the realms, the tree has multiple utilities. Collecting dew from its branches (which can be found near bodies of water) will provide permanent stat upgrades. Additionally, crystallized Yggdrasil sap is a powerful conductor of electricity: hitting it with any electricity will create an explosion. By using Mystic Gateways, one can enter the Realm between Realms and walk along the World Tree's branches to more quickly reach other realms. Should one stray from the branch's path, they will be erased from being unless they have proper protection, such as the Unity Stone. As the Yggdrasil is said to transcend time and space, there can be no origin ascribed to it. Symbols and artistic representations of Yggdrasil appear heavily everywhere, most importantly in the rune travel room of Tyr's temple. When the giants retreated to Jötunheim, they enlisted the help of Týr to hide the travel tower among one of the World Tree's roots, preventing any Aesir from reaching their home. It would later be returned by Kratos and Atreus. According to prophecy, the battle between Jörmungandr and Thor will shake Yggdrasil so violently that it will splinter, sending the World Serpent back to a time before its birth. While it isn't a sapient entity per se, Yggdrasil is important enough to warrant its own entry.