The Norse Pantheon is the dominant race that rules over the Nine Realms of northern Europe. Unlike the Greek gods, they are divided into two tribes (most likely representing the duality of nature) - the pacifistic Vanir and the warmongering Aesir. While most Norse deities are from either (or both) of these tribes, some are hybrids and/or descendants from other sapient races as well (giants, humans, etc). The Norse pantheon debuts in God of War (PS4).

open/close all folders
In General
Odin 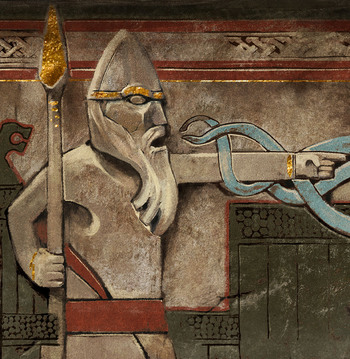 King of Asgard and greatest of the Aesir. He remains unseen throughout the game, but it is him who sent The Stranger to hunt for Kratos and Atreus.

Njörd
The Norse god of seas and winds, the leader of the Vanir gods, as well as the father of Freya and Freyr.
Thor
Click to see spoilers : 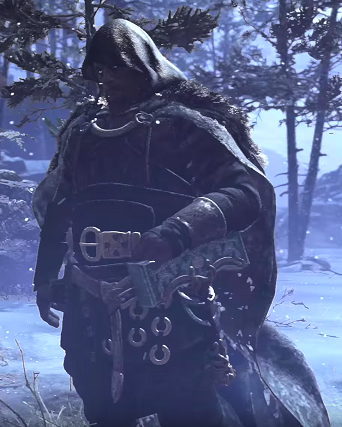 Son of Odin, the god of thunder and strength.

Ullr
The son of Sif and stepson of Thor, he's the god of justice, hunting, and dueling.
Mimir 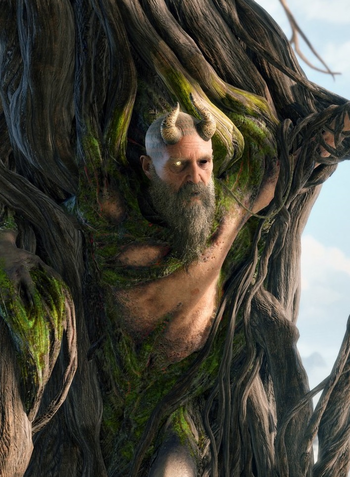 "Some people value their privacy. Best not to judge, brother."
Voiced in English by: Alastair Duncan
Voiced in Brazilian Portuguese by: Milton Levi
Voiced in Russian by: Boris Shuvalov
"Me? I'm the greatest ambassador to the gods, the Giants, and all the creatures of the Nine Realms. I know every corner of these lands, every language spoken, every war waged, every deal struck. They call me...Mimir! —smartest man alive. And I know the answer to your every question."

A god of knowledge and wisdom whom Kratos and Atreus meet at the highest peak of Midgard. Out of favor with Odin and entangled to a tree, Mimir has his head cut off by Kratos, only to be revived, and aids Kratos and Atreus on their journey, giving commentary and explaining lore here and there.

Hermod
Odin and Freya's son, which makes Baldur and Thor his brothers. He acts as a messenger of the gods.
Týr 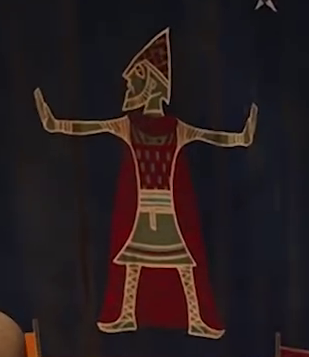 The Norse god of war and law, but he is long dead by the time of the game. However, he's frequently mentioned in lore and his treasures and vault become important during the game. 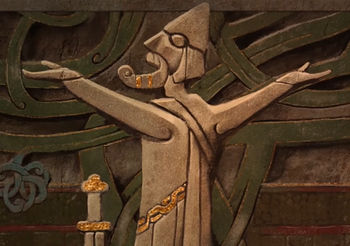 The Vanir god of virility, prosperity, sunshine and fair weather, he is Freya's brother.

Baldur
The Aesir god of light and purity, he is the son of Freya and Odin, as well as the half-brother to Thor. The true identity of The Stranger. For more information, visit this page.
Heimdall

The god of foresight, he's the gatekeeper and guardian of Asgard. 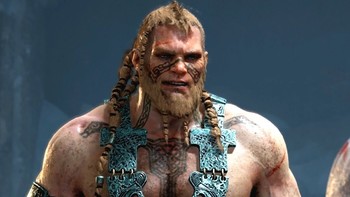 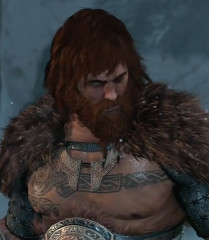 Two minor Aesir who tag along with The Stranger in order to find Kratos. They are also the sons of Thor.

Vili and Vé
The younger brothers of Odin, who helped him in forging the world out of Ymir's remains.
Bragi
The god of music and poetry, a son of Odin and the giantess Gunnlod, and the husband of Idunn.
Idunn
Bragi's wife, the goddess of youth and spring, and the keeper of the golden apples that the gods use to maintain their immortality. The Aesir's only clear agriculture deity (through Thor and Sif are suggested to have been associated with it as well).
Freya
The Vanir goddess of beauty, love and motherhood, she is one of Odin's former wives and Baldur's mother. The true identity of The Witch of the Woods. For more information, visit this page.
Sif
The golden-haired wife of Thor.
Nerthus
A Vanir goddess slain by Magni and Móði during the Aesir-Vanir War.
Skaði 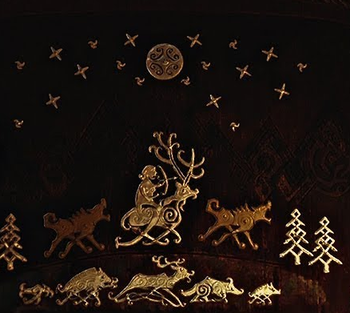 The Norse goddess of hunting, skiing, winter and mountains.

Víðarr
Another son of Odin. During the events of Ragnarök, while Thor fights Jörmungandr and Freyr fights Surtr, it will fall to Víðarr to fight Fenrir. He is prophecised to not only avenge his father, but also survive both the battle and Ragnarök. This has earned him a reputation as a god of vengeance. He is also known as the "Avenger of the Gods".
Loki
The Norse god of lies and trickery. According to the Giants he is fated to trigger Ragnarok.