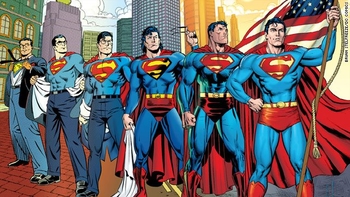 This trope can prove problematic with creations who are tied to a certain time period or conflict. For example, since the 1980s, Magneto's backstory and characterisation have been deeply connected to his status as a Holocaust survivor; no matter that beyond a certain point this ought to make him much older than the character seems.note Although Magneto's case is justified. In mainstream Marvel continuity, he was de-aged into a baby (don't ask) and then re-aged into a young man an unspecified numbers of years before whenever the latest issue of X-Men takes place. However, in the case of The Punisher, simply retconning his backstory as a veteran of a more recent war than Vietnam (officially done in 2012) doesn't alter the character or their motivations too drastically. In other continuities, however, this trope is played straight. That causes a particular type of aversion, the Refugee from Time, where you just don't allow any Sliding Timescale at all or at least not for one character — though ultimately it will make them impossibly old as more real-world years pass. A common solution is to Retcon those conflicts into a generic and dateless Fantasy Conflict Counterpart when the dates start giving trouble.

Indeed, an open-ended series that wants to keep using the same characters and keep them in a given age-range for a long period pretty much must use some variant of Comic-Book Time. However, all characters in a shared universe tend to inhabit the same "present", regardless of when they first appeared or how much time has passed in their own series.