A survivor camp just outside of Atlanta populated by stranded refugees and people who managed to escape the city. They fell in under Shane Walsh's leadership, and held out hope that the military or government would eventually come to their rescue. However, upon the arrival of Rick Grimes, it became clear that this rescue would never come, and the camp unofficially declared Rick as their new leader.

Two redneck brothers who joined the group with the original intention of robbing them, but go on to become vital members of the group and in the series. 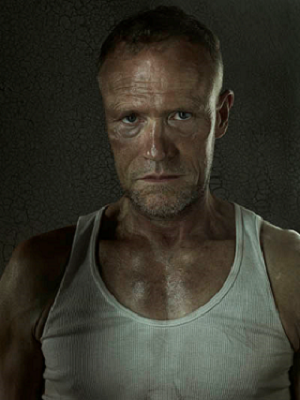 "You’ve got to play the hand you’re dealt. I only got one."

Merle is Daryl's much more racist and jerkass older brother. He put the scavenging group sent to Atlanta at risk, and attacks other members of the group. This forces the others to leave him behind, and he ends up forced to cut his own hand off to escape, disappearing into Atlanta. He was rescued by the Governor and became his right hand man in Woodbury. When Woodbury came into conflict with the group, Merle quickly deserted the Governor to join his brother Daryl, although he was stunned by how much he had changed and was disliked by the rest of the group. Eventually coming to regret his misdeeds and wanting to give his baby brother a fighting chance, he attempts to assassinate the Governor on his own, killing several of Woodbury's top soldiers before being killed by the Governor himself.

Merle and Daryl are also the protagonists of The Walking Dead: Survival Instinct, a First-Person Shooter by Activision that tells some of their story before they arrived at the Atlanta camp.

A family who met Shane and Lori outside of Atlanta. 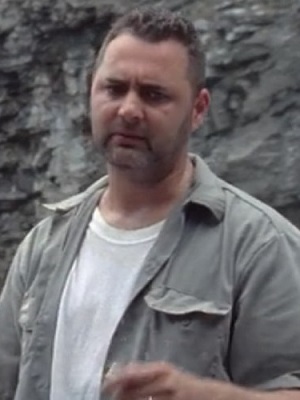 Ed is the abusive husband of Carol and the father of Sophia. He dies during the walker attack on the camp outside of Atlanta. 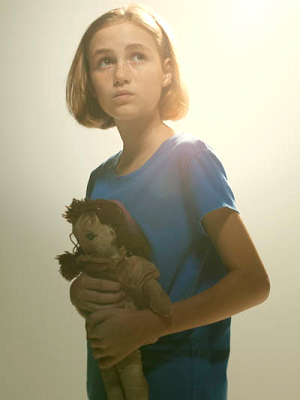 Sophia is the daughter of Carol and Ed, and is a friend of Carl. She went missing in a forest after running away from walkers, and was eventually found in the barn of Hershel's farm, having become a walker. She was put down by Rick.

Sisters from Atlanta who were just coming off from a vacation/trip when the Zombie Apocalypse began. 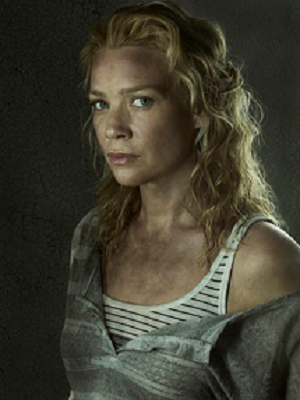 "The pain doesn't go away. You just make room for it."

"What part of "everything is gone" do you not understand?"

Andrea was a civil rights lawyer before the outbreak, but was on a road trip with her sister Amy when the apocalypse began. She and her sister were doing fine at the camp until her sister got bitten. Andrea had to put her own sister down rather than let her continue as a walker. This experience led her to having a death wish. Dale guilt tripped her into not going through with it; she holds something of a grudge against him for that, but is beginning to shake the death wish off. She does, and by the end of the second season has become one of the group's protectors before she gets separated from the rest in the finale and forced to fend for herself.

Andrea is found and rescued in the forest by Michonne, and the two of them spend several months surviving on their own before encountering Woodbury. Andrea stays there and enters into a relationship with the Governor, but is caught in the middle of the conflict between Woodbury and her old group at the prison. She eventually tries to return to the prison but is caught by the Governor and locked her in a room with a dying Milton, who turns into a walker and bites Andrea before she can free herself. She is later discovered by Rick, Daryl, and Michonne, who stays with Andrea as she commits suicide to avoid becoming a walker. 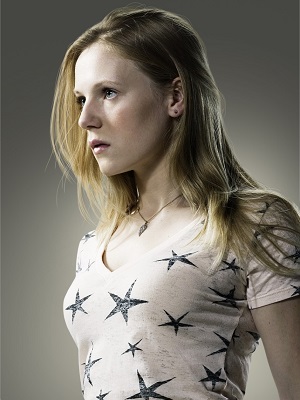 Amy is Andrea's younger sister and was killed in a walker attack early in the series. 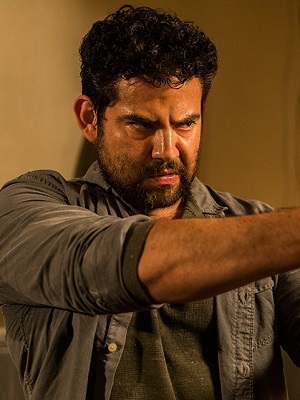 "It's over, Rick. I called the Saviors back. And they're coming."

A member of the original survivor group, Morales was one of the group's main supply runners and leaders. He met Rick when he first arrived in Atlanta, and despite Rick causing trouble for them, Morales accepted him when he orchestrated a plan to get them safely out of the city. After the fish fry attack, however, Morales decided that he and his family would go to look for family in Birmingham, Alabama, and left the group.

However, the worst came to pass, as long before they ever made it to Birmingham, his wife and children all perished. Morales, distraught, pushed on until he finally decided to give up and let himself starve to death. He made it to the Saviors' territory on the East Coast, where the Saviors found and rescued him. Feeling loyal to the people who saved him, Morales joined the Saviors. When war erupted between the Saviors and their rebelling slave states, Morales was surprised that the "Rick from Alexandria" was in fact Rick Grimes. However, Morales felt no loyalty to Rick and prepared to deliver him to Negan for execution. Despite Rick's pleas to stand down, Morales refused, his heart set, and this cost him his life as Daryl snuck up on him and killed him. Though Daryl showed no regrets, both men were saddened that a former ally lost his soul to Negan.

The wife, daughter, and son of Morales who leave with him to look for family in Birmingham. However, they never made it to Birmingham, and they all perished, leaving Morales alone. 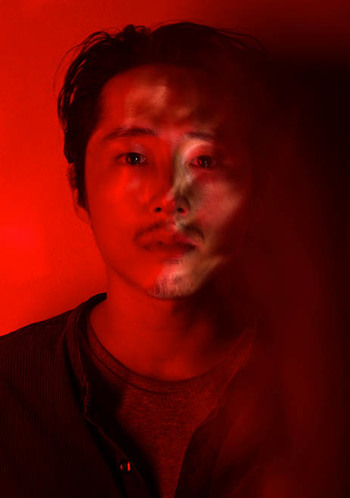 "Rule number one of scavenging: there's nothing left in this world that isn't hidden."

Glenn is more than he seems. He's quick, clever, and brave, and these traits helped him save Rick when they met in zombie-overrun Atlanta. He is kind of laid back personality-wise, though, and has a tendency to let youthful exuberance override common sense. This causes the group to underestimate him and sometimes take advantage of him, while also causing him to sometimes not think out all his plans clearly. While staying on Hershel's farm, he began a relationship with Maggie, who he became engaged to in Season 3, and by Season 6 they are expecting their first child.

After arriving at Alexandria, Glenn is assigned as a supply runner and works hard with Maggie to make sure the group integrates into the community. He comes into conflict with fellow runner Nicholas, who nearly kills him, but Glenn defeats him and spares his life, still being unwilling to take a human life when he does not need to. He is forced to abandon this rule when the threat of the Saviors raises its' head.

During some of the toughest times for the group, Glenn has more than risen to the occasion. He eventually matures to become a highly competent warrior and a leader in his own right, and Rick even entrusts him with a lofty place in his command staff. Despite becoming a hardened, seasoned leader, Glenn nevertheless is one of the most consistently optimistic and hopeful survivors, but tragically, he proves too good to last when Negan arrives. After Daryl tries to retaliate at Negan for the death of Abraham, Negan chooses to kill Glenn instead, to the rest of the group's horror. Glenn suffers a horrific, brutal and slow death, but before expiring, manages to get out his last words to the woman he loves - "Maggie, I'll find you." 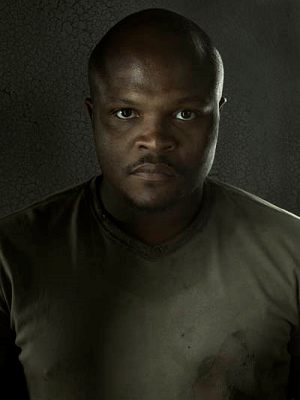 "I'm the one black guy. You realize how precarious that makes my situation?"

T-Dog is a member of the original survivor group and former football player. He feels that that he doesn't really have a place in the group, and seeks to find a way to prove himself to the others. By the third season, he has become one of the group's main fighters, working alongside Rick and Daryl. He is killed early in Season 3, when he gets bitten and then Devoured by the Horde holding two walkers back so Carol can escape. 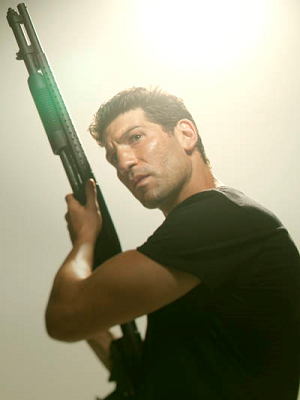 "You can't just be the good guy and expect to live. Not anymore."

"Hell, man, if you think about it in the cold light of day, you are pretty much dead already."

Rick's best friend and fellow police officer. He saw Rick in the hospital, then went back in to serve and protect. Before the hospital was given up for lost, Shane checked one last time on Rick. He heard no heartbeat but tried to leave things in a way that his friend would be safe if he did wake up. Believing Rick dead, he broke the news to Lori, which led to a full romance, which was broken off abruptly when Rick returned.

Shane has not coped well since losing both his position as leader and his position in the hearts of Lori and Carl. He has a increasing ruthless streak which we get to see more and more of as the show progresses. He was killed by Rick in the penultimate episode of Season 2 after attempting to murder him to regain leadership of the group and Lori. 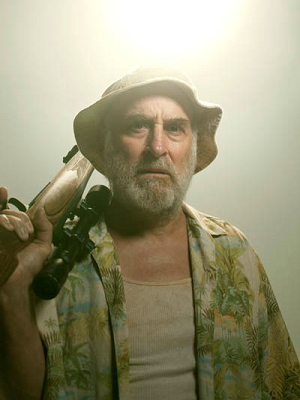 "If I had known the world was ending, I would have brought better books."

"I may not have what it takes to last for long, but that’s okay. At least I can say that when the world goes to shit I didn’t let it take me down with it."

Dale is an old man who is kind of the father-figure to the group. He is quiet and observant, and often something of a trickster as he'll let the others believe incorrect information if he believes it's in the best interests of the group. As the eldest of the group, he is also their moral center and voice of reason. However, this puts him at odds with the increasingly violent and dark Shane, and the group itself as they begin to harden to the world they live in. After making a desperate plea for the group's humanity, he is killed when he gets gutted by a walker on Hershel’s farm and Daryl is forced to Mercy Kill him. 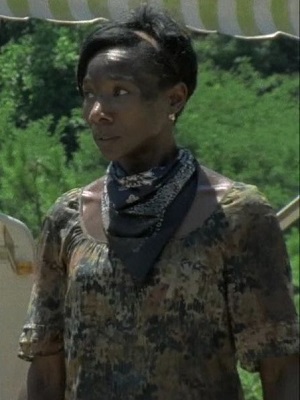 Jacqui is a survivor who worked for the Atlanta city zoning department, and uses knowledge from her job to aid the survivors. She chose to commit suicide by staying in the CDC with Doctor Jenner when it exploded. 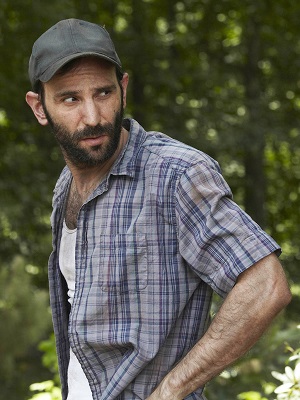 "Do you hear that? That's the sound of God laughing while you make plans."

"You know, the only reason I got away was 'cause the dead were too busy eating my family."

Jim is a survivor in the original group. He was infected during a zombie attack on the camp. He was left behind after asking to die from the infection, feeling he didn't deserve to live for failing his family.