This is a Character Sheet for the youth of Phineas and Ferb. 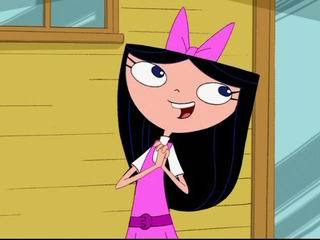 A girl who lives across the way from Phineas and Ferb and is a good friend of theirs. Isabella is a multi-talented member of the Fireside Girls with quite a number of accomplishment patches to her name. She has a not-so-secret crush on Phineas, and likes to pop in once an episode to ask Phineas "What'cha doin'?" and offer to help. 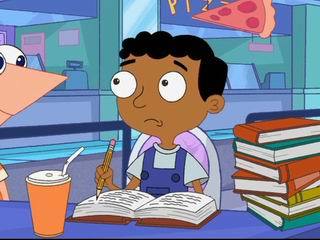 I am stone cold honor roll, I won't be told how to vent!
I won't cry or sigh, I'm here to testify,
Up with the establishment!
"I'm running out of underpants!"
Voiced by: Maulik Pancholy

A shrimpy Bollywood Nerd who's more than a little obsessed with order and studying. He's a friend of Phineas and Ferb who occasionally joins in on their daily activity, or even seeks out their advice. Occasionally, they also seek out his, usually when it comes to things like checking their math. 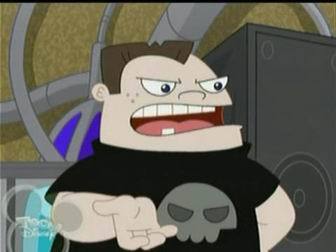 Who will I give noogies to
And tease for being so smart?
"'Wall of meat,' huh? I can do that."
Voiced by: Bobby Gaylor (English), Noriaki Sugiyama (Japanese)

While introduced as the dim-witted, thuggish local bully, Buford has some surprising Hidden Depths, and he eventually becomes a member of Phineas and Ferb's circle of friends. He still exercises a slightly twisted sense of humor, and likes to hang out with Baljeet largely (but not entirely) so he has an easy target for bullying handy. 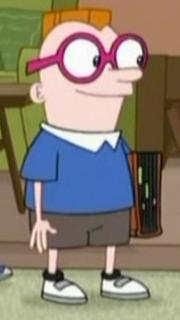 This is what you'll become if you love your idols a little too much.
"Phineas and Ferb rock!! Wooo!!!"
Voiced by: Jack McBrayer

A nerdy local kid who was introduced in "Hide and Seek" as an obsessive fan of Phineas and Ferb and their ambitious antics. He tags along with their daily projects on occasion in later episodes. When he's not geeking out over Phineas and Ferb, Irving can be seen butting heads with his equally geeky older brother Albert. 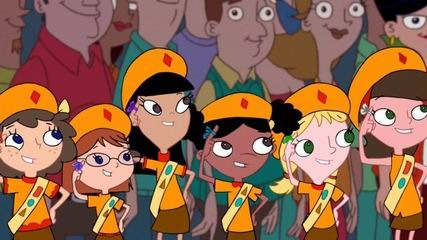 A group of Isabella's friends from the local Fireside Girls troop. Whenever she helps out with one of Phineas and Ferb's schemes, they often end up getting pulled into the antics too. 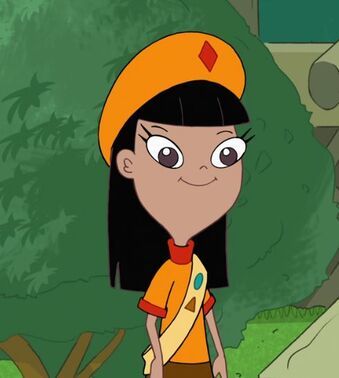 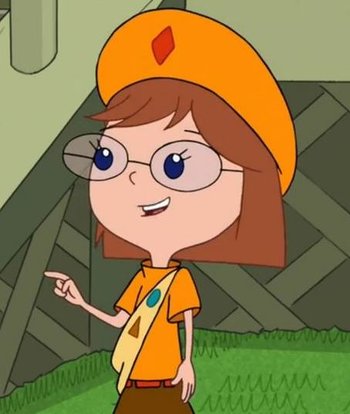 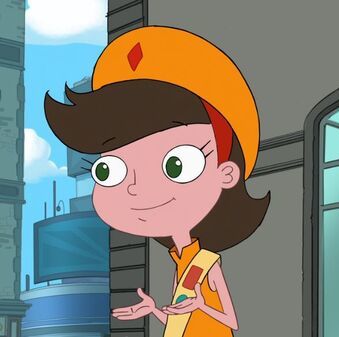 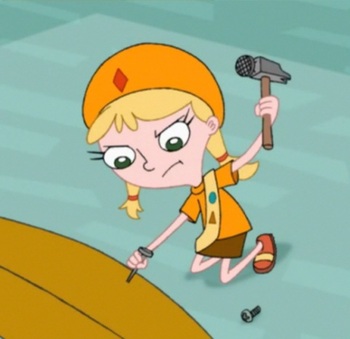 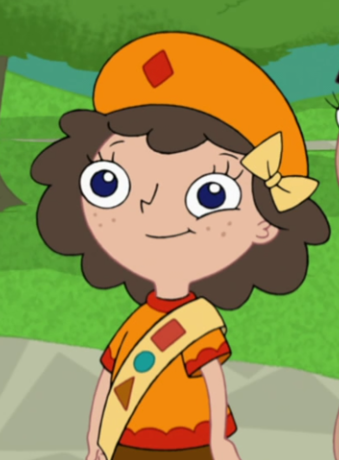 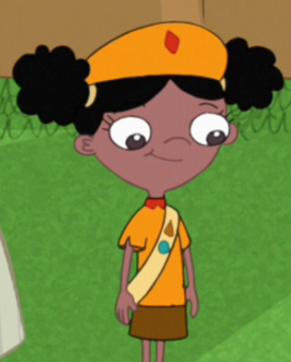 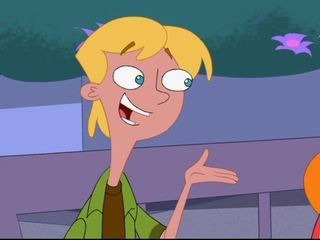 Beautiful, kind and gentle,
And loving and softness and sweetness,
and candy and gum,
"Y'know, Candace, I've had a lot of fun in your backyard, but this is the best time yet."
Voiced by: Mitchel Musso

A nice and easy-going local boy who is the object of Candace's affections. He works at the local fast-food outlet, Mr. Slushy Burger, and plays in a band, "Jeremy and the Incidentals". Later episodes expand on his originally flat characterization, giving him a bit of a snarky side when Candace is freaking out over something or another. 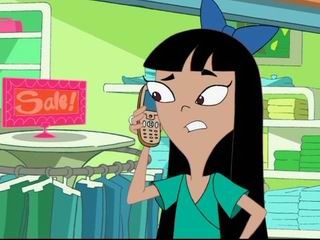 You were always there for me, on you I could depend.
"Oh, lighten up, Candy."
Voiced by: Kelly Hu

Candace's best friend since childhood. Stacy is remarkably more laid-back and unfocused than Candace, and usually tries (with little or no success) to convince her to lighten up over busting Phineas and Ferb, trying to impress Jeremy, or whatever else Candace is worrying about. She also knows about Perry's secret identity. 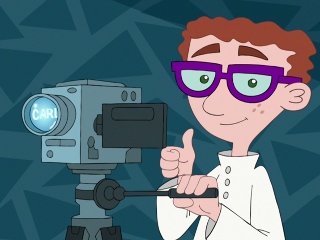 He knows how to format, spell-check and text edit,
He's working this job just for college credit!

.
"Sorry about that, sir."
Voiced by: Tyler Mann

Major Monogram's assistant, a nerdy college intern working for O.W.C.A. who occasionally banters back and forth with Monogram while Perry the Platypus is being sent out on a mission. 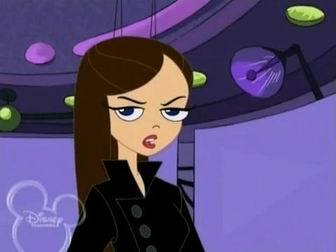 I'm a blood-red rose with a string of thorns, I'm me!
I'm a heart-shaped locket on a cold steel chain, I'm me!
"I so should've gone to summer school."
Voiced by: Olivia Olson 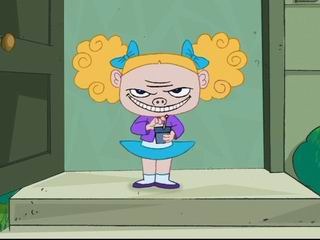 Were you traumatized by squirrels?
Or a little girl with curls?
"I am, and always will be Jeremy's favorite girl!"
Voiced by: Kari Wahlgren

Jeremy's little sister. Despite her cutesy demeanor, she's quite manipulative, and fiercely jealous of any girl trying to get Jeremy's attention. 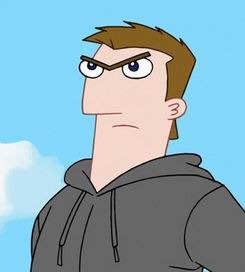 I know that you and I
We come from different places,
There's no telling why or who your heart embraces.
"I hope to follow in my father's footsteps and join you in the battle against evil."
Voiced by: Seth Green

Major Monogram's son who recently graduated from the High School Without A Cool Acronym, and now wants to fight evil like his father. 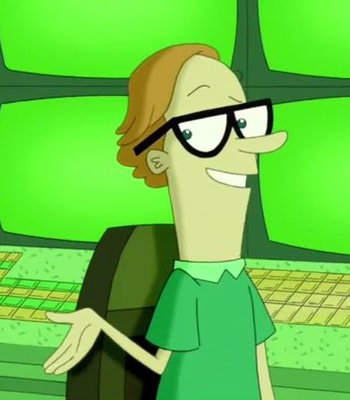 He's Irving, but older.
"They call me... the Truth Detector!"
Voiced by: Diedrich Bader

Irving's older brother, with whom he often butts heads.

She loves world peace, dogs, and pigeons.
"Save the pigeons!"
Voiced by: Alyson Stoner

A hippy-dippy friend of Candace's who shows up on occasion. Word of God has said

that she is Django's sister. Like Django, she has suffered from being Out of Focus on the show. 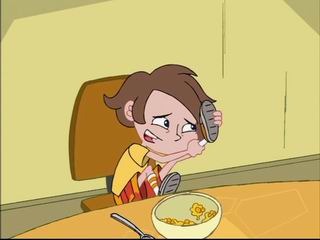 Kids, Don't Try This at Home! He's a professional and also a cartoon character.
"I made this for my Dad, but it hardly compares to his stuff."
Voiced by: Alec Holden (Season 1), Alex Garrett (Season 4)

A friend of Phineas and Ferb's. His father is an installation artist, and some of his father's love of the arts seems to have rubbed off on him. Other than that, there's not much to say about him, which is probably why he's not seen much in later episodes.

A member of Jeremy's band and a love interest to Stacy. 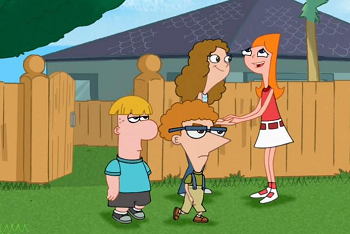 Niece and nephews of the Ferb-Fletchers' next-door neighbor Mrs. Weaver. 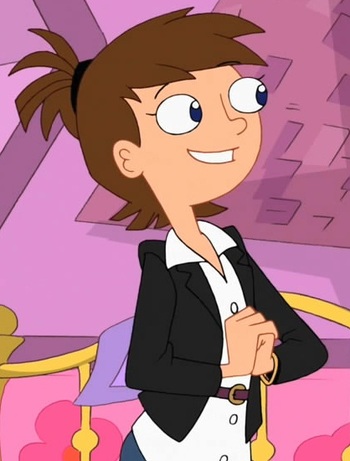 Ferb's cousin and the step cousin of Phineas and Candace.