Characters / Phineas and Ferb: Others

This is a Character Sheet for characters from Phineas and Ferb that do not fall under the Main Characters, Youth, or Adult categories. 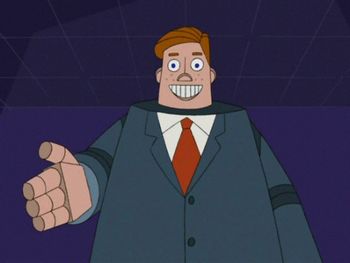 If I'm gonna be a conqueror and win my father's love,
I'll take it to the people with the eagle, not the dove
"We're all very impressed with your numbers, sir!"
Voiced by: John Viener, Joel McHale (prototype head)

A slightly scatterbrained android build by Dr. Doofenshmirtz to destroy Perry the Platypus in the episode "Greece Lightning", based on the Doctor misinterpreting an old film strip about how "the greatest enemy of the platypus is man". Norm eventually started showing up in later episodes helping out Doofenshmirtz with the occasional evil scheme. He has some of the personality attributes of an eerily-cheerful office-worker from The '50s, with an occasional sarcastic streak. 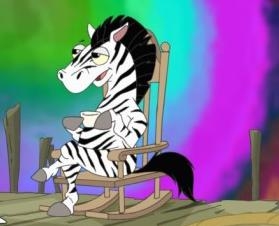 Do you fear the number seven?
Does a zebra call you "Kevin"?
"Oh, it gets much stranger, Kevin..."
Voiced by: Jeff Bennett

A mysterious talking zebra who tends to show up whenever Candace is hallucinating or dreaming. He seems to think Candace's name is "Kevin". 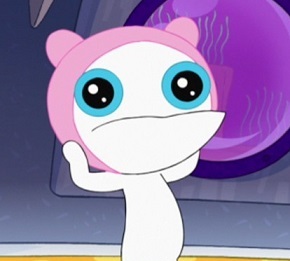 A small, adorable alien who initially crash landed in Phineas and Ferb's yard and was nicknamed "Meap" based on his curious vocalizations. In spite of his appearance he is strong enough to defeat opponents many times his size and turns out to be an intergalactic security agent in charge of stopping Mitch. It has been shown that he belongs to a species whose language is composed solely of the word "Meap" and can shoot destructive rainbow-colored beams from their mouth. 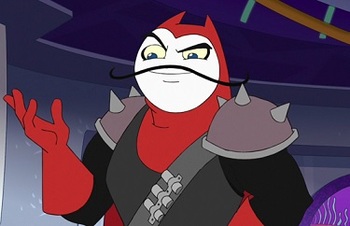 He's Mitch! But some people call him "Big Mitch"!
"You don't get it. You're my prisoners. You should be afraid of me!"
Voiced by: David Mitchell

An evil alien poacher who cruises the galaxies looking for rare specimens and occasionally tries to take over his home planet.

Isabella's pet chihuahua, later revealed to be an O.W.C.A. secret agent. He works in a different division from Perry the Platypus, under Admiral Acronym, and is the nemesis of Professor Poofenplotz.

Terry the Turtle
In another another dimension, Terry is Baljeet's pet turtle in a world where the Gelatin Monster has taken over, still working as an agent of O.W.C.A. But in the first and second dimensions, he's still an agent of O.W.C.A., though his owner isn't Baljeet.

Planty the Potted Plant
When Perry was too busy dealing with Dennis the Rogue Rabbit to take on Doofenshmirtz, Doof gave a nearby potted plant a folded newspaper hat and a trap so he could have someone to talk to. He ended up foiling Doofenshmirtz's plan and became a full agent of O.W.C.A.
Harry the Hyena, Karen the Cat and Maggie the Macaw
Voiced by: Jane Kaczmarek and Danny Jacob (Maggie),
New agents of O.W.C.A. being trained by Perry alongside another recruit, Heinz Doofenshmirtz the "Ocelot".
Peter the Panda 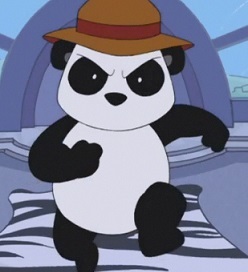 But now you're doing battle,
with a panda from Seattle.

A secret agent panda from Seattle who temporarily replaced Perry as Doofenshmirtz's nemesis. It was later revealed that this replacement was actually part of Doofenshmirtz's plan to defeat the O.W.C.A., upon which Peter and Perry worked together to foil the scheme. Peter has since shown up to assist Perry on several other missions.

A former O.W.C.A. agent turned mercenary. Currently incarcerated, but occasionally escapes to serve as one of Perry's more challenging opponents. Candace, meanwhile, sees him as a much more desirable pet than Perry.

Balloony
A balloon that Doofenshmirtz obtained as a child. He painted a face on it and considered it his friend, but one day it drifted away. Doofenshmirtz would learn as an adult that Balloony had floated into outer space and been captured by the alien poacher Mitch, but was disappointed when the balloon "refused" to follow him any longer.

Klimpaloon, the magical old-timey bathing suit that lives in the Himalayas.
"Nang-nang-nang."
Voiced by: Dan Povenmire

A magical old-timey bathing suit that lives in the Himalayas.

Giant Floating Baby Head
The inexplicable oversized infant head that defies gravity. Nobody understands why it exists or where it comes from.
Super Super Big Doctor
Voiced by: Ali Wong

The main antagonist of Phineas and Ferb The Movie: Candace Against the Universe. First introduced as the leader of Feebla-Oot, and is first portrayed as friendly to Candace, but is then revealed to be a ruthless dictator who enslaves a planet's inhabitants with her mind control plant. 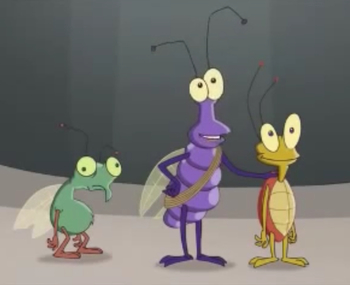 A trio of bugs consisting of the intelligent leader Napoleon and his dimwitted subordinates Wendell and Floyd, who want to make contact with humans.