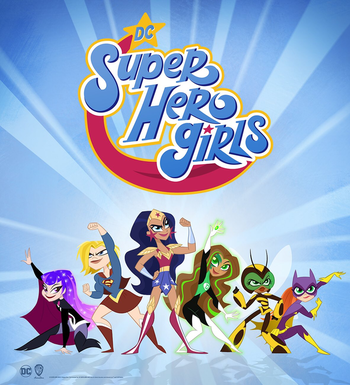 DC Super Hero Girls is a 2019 television series produced by Warner Bros. Animation and based on the DC Super Hero Girls franchise. It premiered on Cartoon Network on March 8, 2019. The show is developed by Lauren Faust, known for her work on countless other animated series, including the Super Best Friends Forever shorts which effectively serve as this show's predecessor. (Faust left the series after the end of the first season in a failed attempt to create material for Netflix.)

A separate continuity from the original web-series, this incarnation follows Barbara "Babs" Gordon, a Batman-fanatic whose father's new job, unfortunately, has them move across the river from Gotham City to Metropolis. Thankfully, the usual stress of moving to a new place is eased by her not only quickly finding a new group of friends to hang out with, but all of those friends also being fellow aspiring superheroes: Diana Prince, Kara Danvers, Zee Zatara, Jessica Cruz, and Karen Beecher (Bumblebee). With Diana as team leader, these girls now set out to hone their skills, fight crime, and hopefully pass next period's math test.

The series kicked off with a theatrical short, #TheLateBatsby

, which was shown alongside Teen Titans Go! To the Movies. On January 10, 2019, said short was uploaded to the official YouTube page, with various other shorts and character trailers being uploaded in the following weeks leading to the show's premiere and beyond. These shorts and character trailers were then frequently broadcast as unlisted "bumper" sequences between scheduled shows on the Boomerang network.

Starting from August 2019, the Season 1 episodes were made available for streaming on Netflix, following the episodes' debuts on both Cartoon Network and Boomerang.

A video game based on the series known as DC Super Hero Girls: Teen Power was released on June 4, 2021, exclusively on Nintendo Switch.

A feature length direct-to-video film, Teen Titans Go! & DC Super Hero Girls: Mayhem in the Multiverse, was released on May 24, 2022 and doubles as a possible Grand Finale.