The Character Page for Twitch Plays Pokémon Crystal. For a directory of all character pages, as well as characters shared between runs, see here.

The protagonist of Crystal and successor to the bickering mob. Many tropes that apply to Red (see here) apply to him as well.

AJDNNW's rival and a Pokémon-stealing jerk. In the remakes, he's revealed to be Giovanni's son. Like his father, Silver causes great trouble for AJ and the Mob.
The Elite Four and Champion

The first member of the Elite Four. He is a master of Psychic-type Pokémon. He replaced Lorelei.

3 years after the events of Twitch Plays Pokémon Red, the Fuschia City Gym Leader was promoted to the second member of the Elite Four. Just like before, Koga is a master of Poison-type Pokémon.

The first of the two returning Elite Four members. Still specializes in Fighting and Rock types. Known by some as Bruno Mars.

The fourth Elite Four member and a Dark-type specialist.

Returning from Red, Lance is now the Champion of the Indigo Pokémon League. And Batman.

The protagonist of Twitch Plays Pokémon Red. Three years after becoming Indigo League Champion, he now resides atop Mt. Silver. He is the final boss of the game and, under one popular interpretation, the hated nemesis of AJ.

The Team in General

AJ's first and strongest Pokémon. As a Totodile it was dubbed "Lazor Gator" for its frequent use of Leer, whose Gen II animation resembled Eye Beams. AJ's starter was a frequent battler and thus quickly leveled up, but the Mob grew restless as the croc turned into an experience sponge while the rest of the team remained weaker. Frustrated by his overachieving, and remembering how the loss of Red's starter galvanized the previous team, the Mob turned against Lazor (now a Feraligatr) and tried to kill him by deliberately releasing him through the PC.

Lazor Gator narrowly survived, but Prince Omelette the Togepi was caught in the crossfire. This, coupled with the previous death of his mentor Admiral Sentret, turned Feraligatr wrathful against the Mob, and the Helix gods they worshipped. In vengeance, he swore to climb to the top of Mt. Silver and kill the pantheon there, so no more 'Mons would be lost by the so-called will of the gods.

AJ's first caught Pokémon. A normal pidgey hailed as the Second Coming of Bird Jersus in spite of his own wishes. Determined to become his own identity and break free from the shadow of his predecessor.
AAAS RJ-I "Burrito"

An Espeon who was originally obtained from Bill as an Eevee. Like Brian he too had to overcome the prejudice of the Mob due to hatred towards Red's Flareon from the previous run, as well as being a gift from Bill, the creator of the PC. Eventually he became more loved and accepted by the community, and took on the role of The Heart of the team.
Advertisement:
KT "Katie"

A Dragonite received as a Dratini in the Dragon's Den. She's been viewed as the avenger of Lance's Dragonite, wishing to take down ATV the Venomoth for its humiliation of her kind.
AAJRR RRR "Solid Snake"

A Steelix caught in Victory Road as an Onix. In his first form he was often quickly defeated in battle, but then was given a Rare Candy given in a Democracy period during the Elite Four, allowing him to evolve. Steelix subsequently gained a ton of resistances and immunities, letting him take the role of team tank. He is the only member of AJ's team to not have an It's Personal motivation for confronting Red, leading to interpretation that he just likes to battle or is merely along for the ride.

A Raticate caught in the Burned Tower.
WWWEEE "The Wrestler"

A Koffing caught in the Burned Tower.
Smoochum "Duke Smoochum"

Hatched from the Mystery Egg given to A.J by the Daycare Couple. It could have been any one out of the seven non-Togepi baby Pokémon in the game, and was very likely to be Shiny.note In the international versions, Odd Egg has 7 in 50 (or roughly 1 in 7) chance to be a Shiny; in the Japanese it is a whopping 1 in 2. A normal wild Pokémon has 1 in 8192; in case of breeding it is possible to raise it to 1 in 64 under specific conditions.
IAAAJS "Master Goldeen"

A Goldeen which AJ caught in Tohjo Falls with the Master Ball.

A Shuckle that was given to AJ by Mania, with the intent of having it returned at some point.
A "Ace"

Another Raticate caught on Route 27.
B-list Pokémon
Various Pokémon that AJ caught and haven't had much effect on the game or the players since.

A second Hoothoot caught immediately after the first. Sent to Bill's PC the instant it was caught.

A Zubat caught in Burned Tower and immediately sent to the PC. Currently in the Daycare

A Tentacool which was captured on AJ's way to Victory Road.

A Tentacool which was also caught on AJ's way to Victory Road, what was left without a nickname

A Noctowl caught on Route 27.

A Raticate caught on Route 27.

A Graveler caught in Victory Road.

A Ponyta caught in Route 27

A Doduo caught in Route 27

A Doduo caught in Route 27

A Golbat caught in Victory Road.

A female Golbat caught with a Pokéball at full health in Victory Road.

AJ's second caught Pokémon. Sentrets had been a surprisingly tough enemy for AJ's team despite being mere Com Mons, as under the Admiral's leader they were honed to be a disciplined army. Eventually, though, he called a truce with the team and joined their ranks, being the Cut user and mentor to AJ's young Totodile. Sadly his stay with the team was short, as he became the Crystal run's first victim of the PC.
:n "Colonel N."

A Pokémon obtained as an egg from Mr. Pokémon. Some members of the Mob quickly latched onto as a god.
Wooper "Wooper Goldberg"

Pokégear Trainers
Trainers who were registered AJ's Pokégear. They call AJ periodically, although they rarely have anything useful to say.

Tropes that apply to all Pokégear Trainers

"It's like my RATTATA is in the top percentage of RATTATA!"

A Youngster who has AJ's phone number. He was one of the first trainers AJ battles and defeats. He trains a "top percentage" Rattata, whatever that means.

A Bug Catcher. He was one of the first trainers AJ battles and defeats. He enjoys telling AJ about the growth of his Caterpie.

A School Kid that traded phone numbers with AJ. He sometimes calls to give hints to AJ, and at other times he speaks about his Tangela...

"You must be feeling real better, huh?"

"AJDNNW, you there? It's your sidekick, IRWIN."

An aspiring juggler who AJ misguidedly gives his phone number. His balls dropped after AJ defeated him.

"Maybe if I train with you, I might get stronger!"

A Cooltrainer who gets AJ's number as a promise to be training partners with him.

Team Rocket
Splintered after Giovanni's downfall, Team Rocket tries to contact their missing leader and bring him back to lead them. Thanks to AJ, they fail.
Gym Leaders

"GUYS WE NEED TO MILK WHITNEY"

The Goldenrod City Gym Leader. Since the beginning of Twitch Plays Pokémon Crystal, a portion of the mob gained an odd obsession with 'milking' her, similar to their obsession with Misty in the first game.

The Ecruteak City Gym Leader. Both he and his gym represent some of the mob's biggest weaknesses.

"GUYS WE NEED TO BEAT MISTY"

The Cerulean City Gym Leader returns in Gen 2, as does the Mob's obsession with beating her. Is not fond of having her dates interrupted.

The former Champion of the Pokémon League whose glory was snatched away almost as quickly as it came when Red defeated him and became the new Champion. 3 years later, he is the Gym Leader of Viridian City, now that Giovanni has left.

A type of Pokémon that became infamous during the Mob's struggle on Route 29, due to the number of times they managed to knock out Totodile. 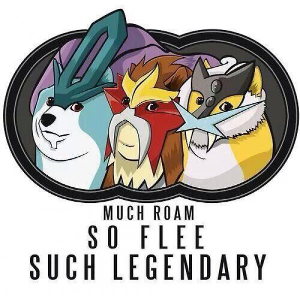 A trio of Legendary Pokémon heralded as gods in Ecruteak City, and awakened by AJ when he fell into the basement of the Burned Tower. This, naturally, makes them a target of interest in terms of either capturing or killing them.

The Legendary Doge of Water, representing the North Wind. Upon his awakening, he takes an interest in AJ and his Pokémon. After being encountered several times, and after AJ has collected all 8 badges, Suicune appeared with his brethren at the Tin Tower. While the other two flee, Suicune deemed AJ a worthy opponent, and challenged him to battle.

The Legendary Doges of Lightning and Fire. AJ has yet to encounter them, but he will soon find that capturing or killing them will not be an easy task, as they flee on sight. When they are prevented from fleeing, their Roars are loud enough to strike fear into the hearts of even the strongest-willed Pokémon, forcing them to retreat.

The Guardians of the Sea and Sky

Hidden deep within the Whirl Islands lies Lugia, the guardian of the seas. It will appear only after AJ defeats the Elite Four.

High atop Tin Tower lies Ho-Oh, the guardian of the skies. It is said it will only appear to a trainer who is truly worthy, after AJ has defeated the Elite Four. Unfortunately, AJ failed to meet certain conditions, and was judged as unworthy.

Old Man With Abra
An old man at the Indigo Plateau Pokémon Center who offers to teleport AJ home with his Abra. Is considered one of the most dangerous NPCs in the game.
Kris

Kris ("The Girl Who Never Was")

After beating the Elite Four, the Mob accidentally chose to start a new game. A new female character was created for a short time before the game was reset to its previous save state, thus creating the legend of 'The Girl Who Never Was'.