The first Big Bad of the show, Devimon is a fallen Angel Digimon who discovered the Black Gears and used them to take over File Island. In his first encounter with the DigiDestined, he's content to just separate them and allow those infected by the Black Gears to deal with them. When it comes time to get his hands dirty, he absorbs all the remaining Black Gears and his minion Ogremon, and quickly overpowers the Chosen Children. It takes Patamon Digivolving into Angemon for the first time to finally destroy him, although as he disintegrates he warns the heroes that are plenty of other, more dangerous villains out there. A bit later, it's revealed that he had hidden the Tags and Crests (objects that would allow the DigiDestined's partners to Digivolve further) on the nearby continent of Server.

His "ghost" reappears in the mysterious Dark Whirlpool in Adventure 02, and warns the Digimon Emperor not to trifle with the powers of darkness. Ignoring Devimon's words, the emperor captures his essence and uses it to add the finishing touch to his latest engine of destruction, Kimeramon. This proves to be a poor decision, as Devimon's evil corrupts the otherwise mindless Kimeramon, causing it to turn on the Digimon Emperor. 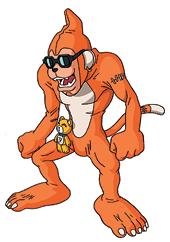 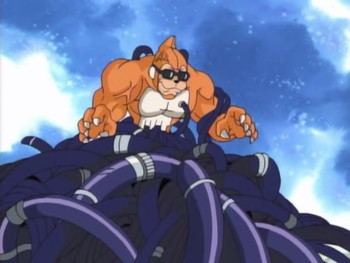 The second Big Bad, an anthropomorphic monkey whom the DigiDestined encounter on the mainland. He controls a Dark Network across the desert that amplifies his power and allows him to command many other Digimon, and proves to be surprisingly much harder to defeat than Devimon (and stay defeated). 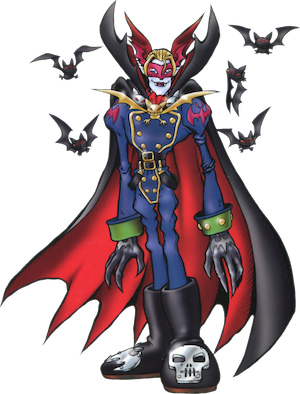 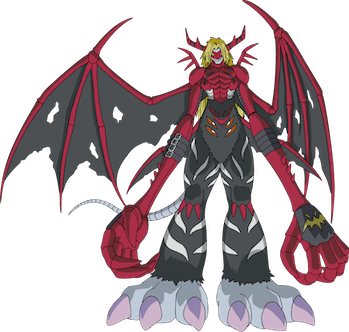 The third Big Bad, who proves far more dangerous than the others and has designs on the real world as well as the Digital World. A rather classic vampire who can even pass off as human.

For tropes related to MaloMyotismon in Digimon Adventure 02, go here.

The Dark Masters
Piedmon: Those bit players are frozen with stage fright, hopelessly waiting for the moment they'll be saved. And yet, there's an unseen twist in the plot.
MetalSeadramon: I say we cut to the punchline and go straight for the action!
Puppetmon: Oh please, that would be boring. I want to play this drama to the hilt! Let's pull out all the stops and give them what they paid for.
Piedmon: I'm in complete agreement, a quick victory would be a letdown.
Machinedramon: *eyes flash*
Piedmon: The DigiDestined will be on Spiral Mountain soon. We must rehearse before they get here. It will be the final performance! MetalSeadramon, Puppetmon and Machinedramon, I present to you the downfall of the DigiDestined!

While the DigiDestined were on Earth combating Myotismon, these four Mega-level baddies (MetalSeadramon, Puppetmon, Machinedramon and Piedmon) conquered the Digital World with their armies, and reshaped most of it into Spiral Mountain. 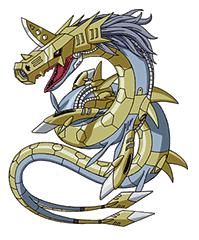 The first Dark Master, he rules over the aquatic portions of Spiral Mountain. A hothead eager to prove himself, he's a cyborg sea serpent with gold plating, and an energy cannon affixed to his snout. 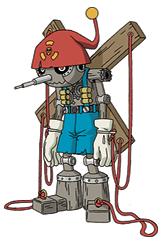 The second Dark Master, he rules over the woodlands of Spiral Mountain. A creepy living marionette, he has the personality of a spoiled brat, and an explosive temper. 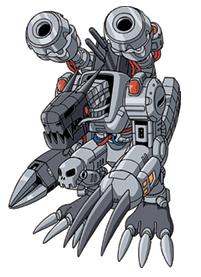 The third Dark Master, he rules over the industrial areas of Spiral Mountain. Initially appearing to be just a mindless mechanical monstrosity, he turns out to be highly intelligent, and as cruel as he is efficient. 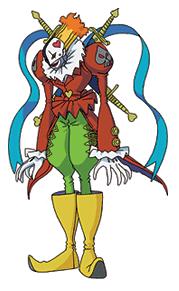 The final and strongest Dark Master and the leader of the quartet, he rules over the rest of Spiral Mountain, which consists of portions of the Digital World corrupted and rendered barren by darkness. A clown with vast magical abilities, his demeanor is not too dissimilar to The Joker. 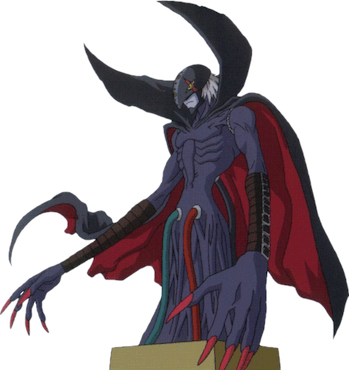 A monstrous being that exists in a dark void outside the Digital World, he is kept at bay by a barrier known as the Wall of Fire. The physical manifestation of the anger, envy and resentment felt by early Digimon who died off due to their inability to adapt and Digivolve, his immense power spawned most of the evil in the Digital World, and is the cause of the time discrepancy between it and the Earth. He's called Apokarymon in the Japanese dub. 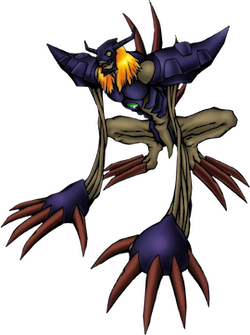 A Y2K bug-inspired Digimon, and the antagonist of the film Our War Game. Spawned from a viral, internet-based Digi-Egg, Diaboromon came close to wiping out the DigiDestined and sparking World War III when he hacked into the Pentagon and launched nuclear warheads, though he was thankfully stopped Just in Time when WarGreymon and MetalGarurumon combined to form Omnimon.

Unfortunately, he just barely survived, and laid low until resurfacing years later in Revenge of Diaboromon. Creating millions of Kuramon out of bits of his data, he sent them to Earth through emails, and after being destroyed once again by Omnimon, resurrected himself on Earth by having the little blobs join together in Tokyo Harbor to form his alternate Mega - Armageddemon. Easily thrashing both Omnimon and Imperialdramon, it looked like Armageddemon would live up to his name and cause The End of the World as We Know It, only for his opponents to combine their power and fatally wound him. Armageddemon broke apart into a swarm of Kuramon, who were transported back online (where they were presumably deleted) by awed civilians' cellphones, made into gateways by the Digivices.

When it was released in English as apart of Digimon: The Movie, Our War Game and the unrelated Hurricane Touchdown/Supreme Evolution! The Golden Digimentals were connected by having Willis be the one who created Diaboromon's egg. They also had the viral entity that corrupted Willis's partner Kokomon be the same one that was responsible for Diaboromon.