Digimon and Other Characters from the Digital World 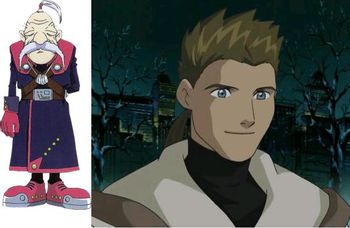 An old man who lives in the Digital World, who actually admits to being made of data. Essentially, he's like a Digimon, but with none of the powers or attributes of them. Appears to run the place from behind the scenes, or at least used to... 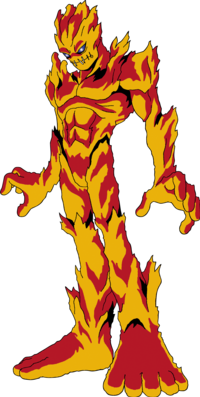 A humanoid Digimon whose body is fully made of fire and flames. He is the guardian of Mihirashi Mountain and a good friend of the Yokomon from Gear Savannah who are dependent on the water from the mountain. One day a mysterious Black Gear gets introduced inside him and turns him crazy. Meramon comes down the mountain to attack the Yokomon village where the Chosen Children happen to be there too. Biyomon digivolves to Birdramon to protect Sora and frees him from the gear. He joins Mimi and Joe to fight the Dark Masters later in the series.

The first Ultimate-level Digimon the children meet, he's an android in charge of a factory in File Island. Andromon gets brainwashed by one of Devimon's Black Gears and tries to kill the children but Kabuterimon attacks his right leg and the Digimon returns to his original personality. Later in the series, Andromon joins the children to fight the Dark Masters and becomes a useful ally against Machinedramon and Piedmon. After the final battle, everyone rejoins before the children part away from the Digital World and Andromon takes a last picture.

Andromon returns in Digimon Adventure 02 as the leader of a hi-tech city and is possessed by one of Digimon Emperor's Dark Rings until Kari reminds him in tears of his past as a friend and ally. 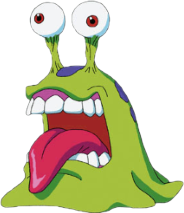 The series' Com Mons. Slug-like Digimon whose attacks rely on... throwing poop. Though they are fairly neutral, they join a faction depending on the situation, and will even pull a Heroic Sacrifice if someone they are fond of is in danger. 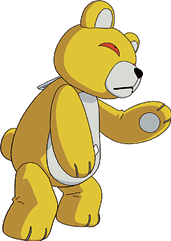 A teddy bear Digimon, he is the mayor of Toy Town and rules the city as a place for toys that were abandoned by children. He gets possessed by a Black Gear and turns most of the children into brainwashed toys and imprisons the Digimon, except for Mimi and Palmon. Palmon digivolves to Togemon and frees him. He returns for making a raft for the children to cross the ocean to the Server Continent. 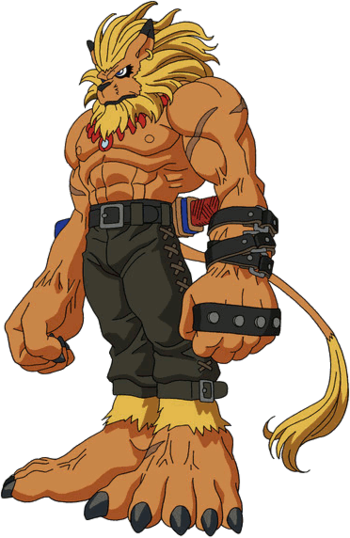 A (at first) friendly wild lion-like Digimon who fights for the weak and helps the kids, though without entirely trusting them. He appears again during the Dark Masters Arc as the powerful SaberLeomon. He dies protecting Mimi during a fight with MetalEtemon, kickstarting the tradition of killing Leomon every time he shows up in a series. Leomon returns as an ally in Digimon Tri, only to die once again when Meicoomon goes crazy. 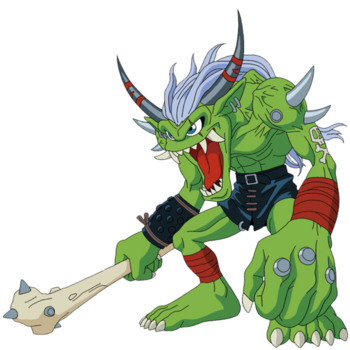 Leomon's rival and foil, an uncouth brute with a sense of humour. As his name indicates, he resembles an ogre.

He joins up with Mimi and Joe during the Dark Masters Arc after he is beaten by MetalEtemon. 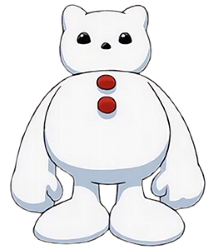 A Digimon with the shape of a snowman. Tai and Agumon meet him after being separated by Devimon, and is another of the victims of the Black Gears. They free him and he helps them to find Matt and Gabumon in the nearest island with his icy powers. After finding Matt and Gabumon, he fights against a rogue Mojyamon and helps them to get back to File Island. When Devimon is finally defeated he comes back to create a raft for the children to cross the ocean and reach the Server Continent.

Frigimon is later recruited by Joe, Mimi and Ogremon, among other Digimon, to fight the evil Dark Masters. 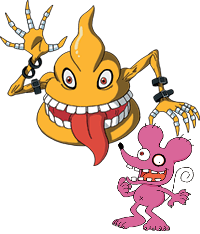 Two Virus type Digimon always seen together. Chuumon is a Rookie level Digimon similar to a rat that serves as the brains for Sukamon a... well, poop-shaped Digimon. At first, they acted as robbers but then they touched Mimi's Digivice, becoming much better individuals. 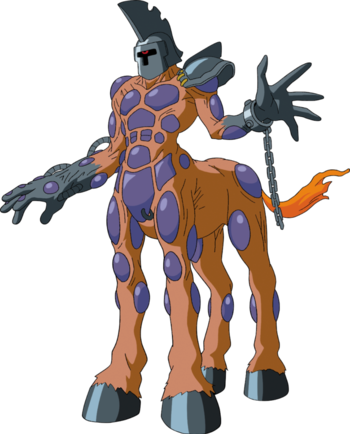 A centaur Digimon. He is the guardian of an old temple's ruins and lives in its labyrinth. He becomes brainwashed by the Black Gears until Izzy and Mimi arrive after being separated by Devimon. Then Centarumon explains both about the meaning of their Digivices and their usefulness. Centarumon returns after Devimon's demise to help the children to create a raft to cross the ocean.

During the Dark Masters Arc, he explains to his old friend Gennai the prophecy about a greater evil crossing the Wall of Fire: Apocalymon, the true Big Bad. 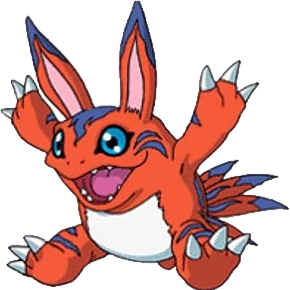 Elecmon is the guardian of Primary Village, a place where baby level Digimon are born and where deceased Digimon reincarnate again. He protects them with his life. When Devimon split File Island into smaller pieces of land, he became more overprotective than ever, and attacked Patamon and T.K. after their arrival. But T.K. came with a non-violent idea to finish his dispute with Patamon and they became friends.

When the Dark Masters rose to power, they destroyed Primary Village and Elecmon became depressed. It wasn't until Joe and Mimi arrived, to tell him to join the fight against the villains and restore the place. With their defeat, he happily returned to his old job in the new Digital World. 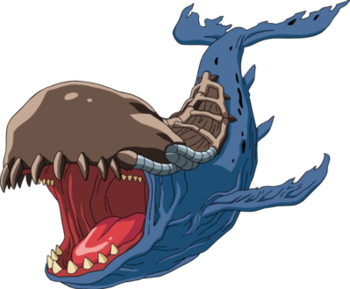 A gigantic sea animal Digimon the Digi-Destined first encountered on their way to the Continent of Server. Under the influence of a Black Gear he swallowed the gang, but once freed, becomes a powerful ally in the Net Ocean.

Even if he is a Champion level Digimon, he can stand against Ultimate level Digimon like Divermon and tackled MetalSeadramon, a Mega level Dark Master, twice with great success!

A cute but powerful Digimon trainer living in a hidden oasis in the desert. He helps the Chosen Children train to combat Etemon. 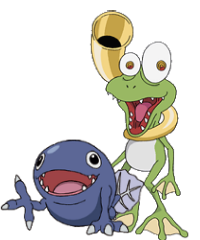 Amphibian Digimon that live and serve in a castle to its lord, ShogunGekomon. Otamamon is the Rookie level tadpole, while Gekomon is the Champion level frog. When the lord went to sleep out of shock for listening a much better song than his, the Gekomon and Otamamon began a music festival each other with disastrous results. One day, DemiDevimon told them a girl with a nice voice would arrive soon, so they welcomed Mimi as their savior and princess. But Mimi turned more and more selfish much to the Digimon's displeasure. Thanks to Joe and Tai's arrival, Mimi returned to herself and finally sang for the sake of Gekomon and Otamamon... but ShogunGekomon was very angry to be awaken and was put to sleep again.

When the Dark Masters rose to power, the Gekomon castle was destroyed and their lord killed. All the servants scattered away without a home and hiding from the villains, until Mimi found them again and they joined the fight. After the defeat of the Dark Masters, they now live at a Edo Period type village in Digimon Adventure 02. 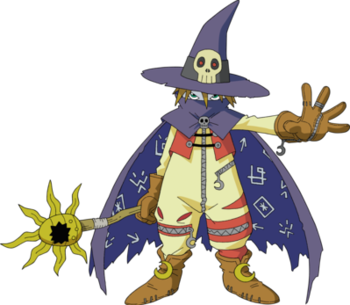 A minion of Myotismon who is more than he seems, and has strange powers even by Digimon standards. He's also an old friend of Gatomon's and her only real friend, and turns out to greatly influence the story. 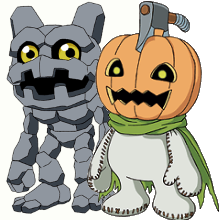 Two Digimon from Shibuya! ...They aren't actually evil. They were recruited by Myotismon to search for the Eighth Child in the district of Shibuya. But the energetic and cheerful ambience of the place and their mischievous personalities make them forget about their real mission.

Matt and T.K. meet them while searching for a disappointed Patamon, being involved in their jokes and mayhem until Myotismon appears and kills them for disobeying his orders and protecting the children.

In Digimon Adventure 02, a different Gotsumon appears. The original ones are remembered when Matt and T.K. pass through the same store in Shibuya.

Two of Puppetmon's henchmen, Floramon and Deramon are supposed to be his playmates — i.e., people for him to chase around and try to hurt when he gets bored — but, understandably enough, feel little loyalty for him and willingly help the Digidestined infiltrate his mansion.
Homeostasis

A being who wishes for balance in the Digital World, it consists of data like Digimon, but unlike them it is unable to take physical form.

In Digimon Adventure it uses Kari as a conduit to tell the Digidestined why they were chosen and how the Digivices, Crests and the Partner Digimon were created. It may have also used her again in order to allow the tired Digimon to digivolve when in Machinedramon's sewers.

It uses her body again in tri to inform the partner Digimon that it will reboot the Digital World if Meicoomon and the infection aren't stopped. 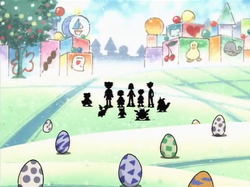 The Children's predecessors, they are mentioned by Gennai to have defeated an sealed away a great evil which came from the Wall of Fire, which turns out to be Apocalymon.

Relatives and Family Members of the Chosen Children

Matt and T.K.'s divorced father. He works at the Fuji TV station and is usually in the thick of whatever Digimon goings-on end up in the real world, either because he works for local television news or because his kids sucker him into it. He's a slightly distant parent, but he proves to be one of the most helpful adults, readily accepting of his kids' destiny and quick-thinking enough to help.

Matt and T.K.'s divorced mother, she is a newspaper journalist. She has a rough relationship with Matt since the divorce, but T.K. follows in her footsteps as a writer. She proves extremely valuable to the team, using her investigation and research skills to help them track down Oikawa and the Dark Spore children.

After the series, her ex-husband arranges for her and Sora's father to be the "Digimon experts," allowing the children some protection while still keeping the public informed.

Izzy's adoptive parents. Masami was his birth father's cousin. They were given the chance to adopt Izzy shortly after his parents and their own baby died. While they initially kept this a secret from him, they were forced to confront the idea of losing him during the mess in Odaiba and came clean shortly afterward. Both are very doting, and out of gratitude, Izzy goes well out of his way to be the "perfect" child.

The reason why Mimi is spoiled. Keisuke is the father and an office employee while his wife Satoe is a full dedicated housewife.

Sora's cold but caring mother. She excels in ikebana (or Japanese flower arrangement) and wants her daughter to inherit her position.

Joe's two older brothers, who are combined into one character for the English dub.

Eldest brother Shin appears in season one. He is also studying medicine in the university to become a doctor like his father but has different plans for the future. With that philosophy of life he teaches Joe to be himself and follow his own path.

While Shin is much calmer and more laid back than Joe, Shuu shares more than few of his personality quirks.

Parents of Joe, Shin, and Shuu. They don't have any scenes until the Michi e no Armor Shinka Radio Drama, and aren't seen until Digimon Adventure tri.: Determination. Still, Dr. Kido's presence is definitely felt, as the main source of conflict for Joe. Being himself a doctor, he wanted the same for all three of his sons, but none of them were entirely happy with that. Once he's made to understand that, he's reserved, but supportive.