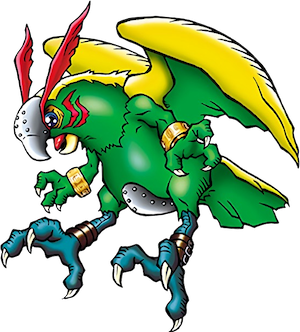 Actually the first hostile Digimon that Tai, Kari and the future DigiDestined meet. He is an enormous parrot-like Digimon that emerges in Hikarigaoka (Highton View Terrace), where Tai and Kari lived before the start of the series, and attacks it. Koromon, in his big Agumon form, fights it but it's so powerful that has to digivolve to Greymon to finish him.

He debuted in the pilot episode of the series directed by Mamoru Hosoda as the main threat. Appears again in flashbacks in episode 29, when the children return to Japan and see a similar situation with Mammothmon attacking Hikarigaoka, remembering the already forgotten events, and in episode 45, when the mysterious entity tours the children about the origins of the Chosen Children. 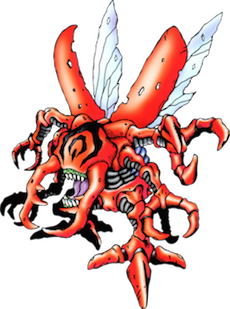 A big red stag beetle, and the first Digimon encountered by the chosen children after they met their partners. He terrorized them, but when the Digimon partners digivolved to their Rookie stage and started to give him a beating, he resorted to knocking them, the DigiDestined and himself off the cliff they were on. Another Kuwagamon, even larger than the one before, later attacked Tai and Agumon in the deserts of Server before being killed by Piximon, and one appeared in the real world after VenomMyotismon's defeat, knocking an airplane out of the sky. Whether this was the same one that appeared in the series premiere is left vague. 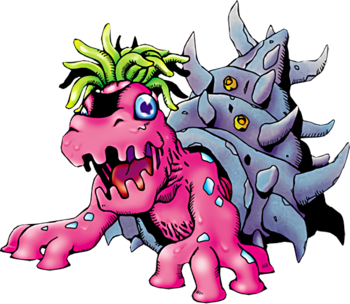 "There is no escaping! You're in my element now!"

One of the only recurring antagonists that isn't in the employ of a major villain, Shellmon first appears in episode two and is defeated when Agumon Digivolves to Greymon for the first time. Later, he returns for revenge, but is sent retreating by Biyomon and Tentomon. 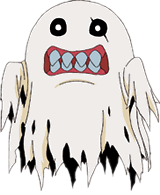 First appears in episode 11, when the DigiDestined were separated, and Joe and Sora encounter a group in a cemetery. They are able to merge together to form a "Lord Bakemon". Later, many more are encountered in Myotismon's employ, working under Phantomon. As evil spirits, they are weak against faith.

The Lord Bakemon also holds the honor of being the first enemy to be destroyed by the children's Digimon rather than just made to retreat. 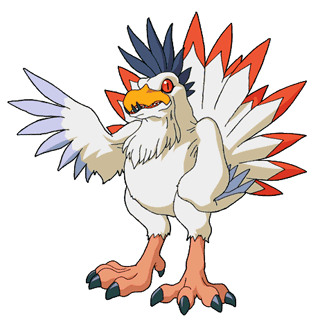 A flightless bird Digimon with petrification powers based on the mythical cockatrice. He owns a large transoceanic ship, worked by Numemon slaves, that cruises the desert in the Server Continent; he's also allied with Etemon to find the Digi-Destined. He's called Cockatrimon in the Japanese original. 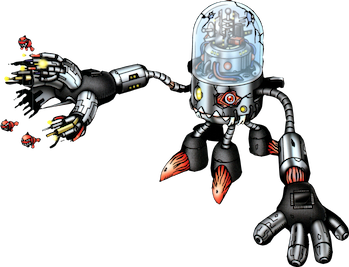 Called Nanomon in the Japanese version and an enemy of Etemon's, this robotic Digimon is completely unhinged. Was once a Vaccine type, but became a Virus type after an attack from a powerful Virus type destroyed his logic circuits. Out for revenge against Etemon for sealing him in a pyramid. Kidnaps Sora and tries to create a copy of her so that he can use her crest and digivice against Etemon.

Debut: "Forget About It!"

One of Myotismon's lackeys, stirs up trouble for the DigiDestined. Tries to steal their crests, inevitably ending up being the one to cause the crests to activate instead. Gets abused by Myotismon and the DigiDestined alike. 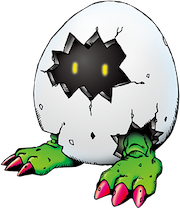 The owner of a restaurant near a large lake in the Server Continent. He has Joe and Matt to work in an abusive way, under the eye of his The Dragon Vegiemon. Due to an accepted bribe by DemiDevimon, he retains them to break Matt's Crest of Friendship by getting him tired of the clumsy and insecure Joe. The plan fails and he was ultimately knocked out by WereGarurumon's The Power of Friendship.

He returns in Adventure 02, this time accusing Yolei of not paying and gets possessed by one of Digimon Emperor's Dark Rings. There's also another Digitamamon (in the American dub it's supposed to be the same) owning a Chinese-type restaurant. 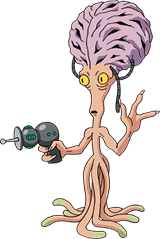 An alien-like Digimon who lives under a mountain in the Server Continent. He has a Pocket Dimension of his own under the ground to trap peasants and tricks them by threatening to send them to Hell if they don't release their curiosity from their minds so he can collect them.

Izzy and Tentomon fall after DemiDevimon guides them with warnings spread all over the road. Izzy falls under his trap and releases his curious mind for Vademon, remaining brainwashed. Meanwhile DemiDevimon pleads Vademon with false promises to steal Izzy's Crest of Knowledge, but Izzy regains his mind thanks to Tentomon. Vademon fights against Kabuterimon but his powerful Ultimate level forces the giant beetle to digivolve to MegaKabuterimon for the first time and defeats him.

Myotismon's strongest underling, one of only four Ultimate-level Digimon to appear under his command (the others being SkullMeramon, Mammothmon and MegaSeadramon). First appears driving Myotismon's stagecoach; later reappears as the commander of the Bakemon army and also summons Tuskmon and Snimon to delay the children and smashes the recording that was weakening the Bakemon. Was caught in the crossfire when all eight DigiDestined Digimon attacked Myotismon, succumbing to Angemon's Hand of Fate. 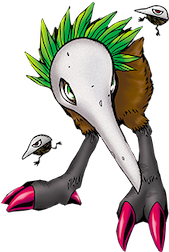 A minion of Puppetmon's who confronts the chosen children to keep them from finding TK after his master kidnaps him.

"Wait a minute, Puppetmon, I have a better idea. You can take care of those other DigiDestined children if you want to, but as for this one, leave him to me. I'll have him climbing up a tree before I'm through with him!"

A wise old Digimon who seems to be a friend of Puppetmon's. He sows dissension among the DigiDestined, realizing that united, they would be too strong for Puppetmon, but warns Puppetmon to be cautious anyway. Puppetmon dislikes this "negative attitude" and destroys him for it. He's known as Jureimon in the Japanese version. 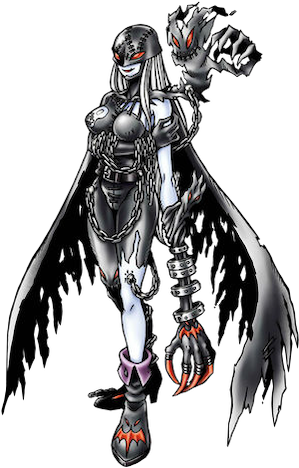 Devimon's Distaff Counterpart, and Angewomon's Evil Counterpart. The bodyguard and gatekeeper of Piedmon, she attacked Tai's group in the darkness portion of Spiral Mountain after they defeated Machinedramon. After effortlessly deflecting most of what the group threw at her (and getting into a Cat Fight with Angewomon) she was destroyed when Angewomon managed to blast her with a point-blank Heaven's Charm.

A second LadyDevimon appears in Digimon Adventure 02 as part of Daemon's minions. This time she fights Sylphimon (Gatomon's DNA Digivolution with Aquilamon) and attacks a group of skaters, but before she can kill one, she is defeated from the back by Sylphimon's Top Gun.