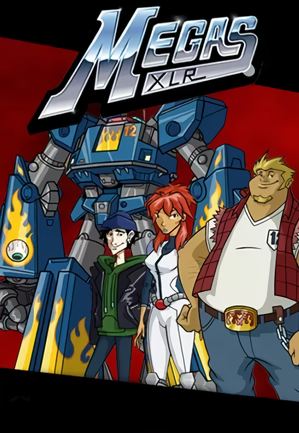 Action cartoon Megas XLR — created by Chris Prynoski and George Krstic, two of the minds behind MTV's Downtown — serves up an affectionate spoof of "guy culture", science fiction, anime, and pretty much anything considered "cool" in The '80s. If you consider Neon Genesis Evangelion the Deconstruction of the Humongous Mecha genre, then consider Megas XLR the Demolition (and, possibly, the American precursor to Tengen Toppa Gurren Lagann). Megas remains one of the few mecha shows to get unanimous praise from 4chan's /a/, /co/, and /m/ boards.note  For 4chan, that really says something, especially given that those three boards tend to have very divergent tastes.

In the distant future, mankind finds itself losing a war against a race of aliens known as the Glorft. Only one hope remains: a stolen Glorft battle robot prototype, converted into the Mechanized Earth Guard Attack System (MEGAS). Humanity knows it can't stop the Glorft now, so it decides to send MEGAS into the past to turn the tide of the war — but a mistake accidentally sends the mecha too far into the past. MEGAS sits in a junkyard in Jersey City for seventy years — until a large, jovial gearhead and video game fanatic by the name of Coop unearths it.

Coop repairs the robot, but he also makes a few modifications — such as replacing the mecha's absent, destroyed head with a 1970 Plymouth Barracuda, and operating the mech's systems with various video game controls. He dubs it XLR — "Xtra Large Robot" — but as he shows it off to his friend Jamie, who should show up but soldier, mechanical expert, and all-around Action Girl Kiva Andru, who's traveled from the future to reclaim the robot she modified in the first place. Coop's modifications, however, have made him the only person who can pilot MEGAS — and that sucks for Kiva, because a band of Glorft troopers, led by the tyrannical Warmaster Gorrath, followed her through time to take MEGAS back for themselves. Coop, Kiva, and — to a lesser extent — Jamie find themselves thrust into battle the Glorft, along with countless other threats to the Earth; too bad they usually do just as much damage to the Earth as the threats themselves.

The show, originally entitled Lowbrow, began life as a pilot episode that was shown in Cartoon Network's 2002 Weekend Summerfest to determine a new Cartoon Cartoon, where it ended up the most popular one. The pilot episode was also shown during Toonami's Giant Robot Week note  when everything and anything giant robot was shown, from Gigantor to Neon Genesis Evangelion - yes, that Evangelion , and the show itself premiered on Toonami. It has yet to see a DVD release, but at least you can still find it on iTunes and Xbox Live. As of 2022 it is also available on HBO Max, in Latin America…

Rumors circulated for a while about a possible game/crossover headed by Valve, but nothing has been said since said rumors came to light. MEGAS and the characters did appear in Cartoon Network's MMORPG FusionFall, however.

Unfortunately, Megas XLR suffered the fate of being written off by Cartoon Network, meaning that it can no longer be aired legally on Cartoon Network, Adult Swim, or any of their affiliates (you could essentially say that it was Screwed by the Network on a technical level) and depriving many fans of a much-desired return on the revived Toonami block. Fortunately, George Krstic, Chris Prynoski, and the Toonami crew are working to bring it back.

As of 2014, George Krstic says that the show was written off as a loss, which means that the show cannot be aired again without getting into legal problems, effectively condemning it to never getting a revival or a even a DVD/Blu Ray release...

For a while, anyway.

On February 8, 2019, Krstic stated on his Twitter that Warner Bros owns the rights to the show now.

While it's too early to tell what it could mean for the show's future, at the very least, the show is finally in proper legal hands.

Much of Megas' production team went on to create the Disney XD series Motorcity, which features very similar spoofing of '80s culture and aesthetics.

Do not confuse this show with The Megas.

Megas XLR serves as the Trope Namer for the following tropes:

Coops' Video gaming skills that he learned over the years was put to use when he rewired MEGAS' entire control layout to correspond to Videogame Controllers.

Example of:
I Know Mortal Kombat

Coops' Video gaming skills that he learned over the years was put to use when he rewired MEGAS' entire control layout to correspond to Videogame Controllers.