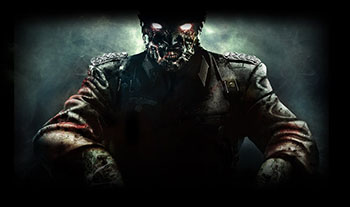 Four Sociopathic Soldiers take on the undead hordes of the Axis. Or replace said soldiers with four historical figures from the 1960s, four horror-genre celebrities, four oddball civilians, four gangsters from the 1930s, four murderers from the 1940s who somehow managed to survive the apocalypse, or four adventurers from the 1910s trying to bring down an ancient cult, possibly less Sociopathic, but still pretty awesome.

, Pack-a-Punch upgrades and the Mystery Box to help you hold out for longer, or hunt for Easter Eggs to discover more about the mode's Mind Screw narrative.

, Treyarch committed to releasing a Zombies map in every DLC from then on. The World at War DLC season introduced the main cast, known as Ultimis - Dr. Edward Richtofen, "Tank" Dempsey, Nikolai Belinski, and Takeo Masaki, who would go on to star in most of the maps released for World at War and 2010's Black Ops. Other maps featured other playable characters, such as "Five", a map in which you play as John F. Kennedy, Richard Nixon, Fidel Castro, and Robert McNamara as they fend off a zombie outbreak in the Pentagon during the Cold War; and Call of the Dead, depicting Sarah Michelle Gellar, Danny Trejo, Robert Englund, and Michael Rooker as themselves fighting off legions of zombies commanded by an undead George A. Romero on the set of the director's latest movie.

Black Ops II, released in 2012 introduced a new crew of characters called Victis who would become the main focus of most of the season, before the focus shifted to new incarnations of Ultimis known as Primis. Black Ops III, released in 2015, continued to expand the game mode with even larger maps, mechanics, and a much stronger focus on the Story Arc and the characterization of Primis. Black Ops IIII, released in 2018, continued to expand the series as it introduced a new "Chaos" Story Arc that ran parallel to the original Story Arc, now known as the "Aether" story. The Aether story concluded at the end of Black Ops IIII, with a soft reboot beginning with the release of Call of Duty Black Ops: Cold War in 2020.

Additionally, a tie-in Zombies comic debuted in October 2016 by Dark Horse Comics, with the first volume revolving around Victis, while the second volume acted as a prequel to the new Chaos Story Arc.

New iterations of Zombies, developed by Sledgehammer Games and Infinity Ward, debuted in Call of Duty: Advanced Warfare, Call Of Duty Infinite Warfare, Call of Duty: WWII, and Call of Duty: Mobile. With the exception of Undead Siege, which links ''Zombies'' to every COD timeline and more, they are unrelated to the Treyarch series, and thus their tropes should go on their respective pages.

The Nazi Zombies story is very complex; it involves practically everything from the Illuminati to the Third Reich to aliens to the works of George A. Romero. Each map contains tons of little Easter eggs only the most observant of players will find and these little clues often play a bigger role later on. The ongoing Story Arc is also mostly played out through increasingly complex Easter eggs while the backstory is told through audio logs. Word of God is mostly averted as Treyarch almost never has anything to say about the story, leaving fans to try to put the pieces together by themselves. The general synopsis can be found here, put together through said audio logs and Easter eggs. And after the conclusion of the Black Ops III season with Revelations, in an unprecedented move, Treyarch released the full Zombies timeline

with pretty much every question about the lore up to that point being answered.

Despite the fact it was originally called Nazi Zombie Army, the Zombie Army Trilogy is no relation to this game, being spun out of a Sniper Elite V2 expansion series instead of a Call of Duty one.