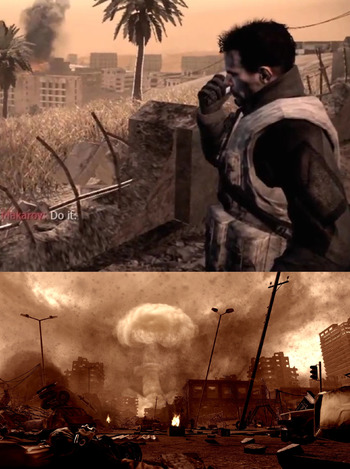 "[Vladimir] Makarov is fighting his own war and he has no rules...He doesn't flinch at torture, human trafficking, or genocide...He trades blood for money."
"Today, the Front embarks on a conquest. Here and now, we will eradicate the authority and influence of the Earth! Our world is just beginning. Theirs is dying! It is not enough to break free. We will break them! Their cities will burn along with the pages of their history."
—Admiral Salen Kotch, Infinite Warfare
Advertisement:

There's a soldier in all of us. And when facing these evil bastards, you better hope that soldier is badass.

Entries are listed in alphabetical order.