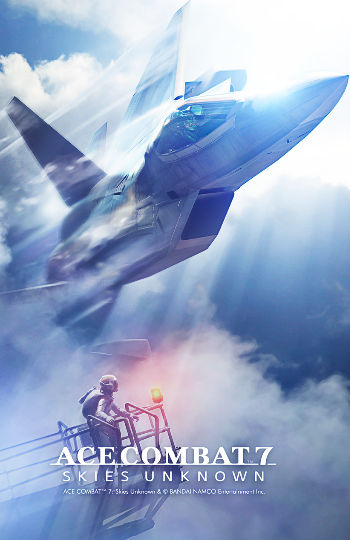 Does the color of the sky mean anything special to you? It does to me. A hell of a lot. When I close my eyes, the sky in my dreams... is a deep, dark blue.
"Trigger, your call sign is Spare 15. Consider it your prisoner number for the air."
Advertisement:

Ace Combat 7: Skies Unknown is the twelfth game in the Ace Combat series that's set in Strangereal, and the eighteenth overall.note Thirteenth in the Strangereal continuity and nineteenth overall if you count Ace Combat: Assault Horizon Legacy as separate from Ace Combat 2. The first numbered title in more than a decade since 2007's Ace Combat 6, Ace Combat 7 is the first game of the series to feature PlayStation VR, with a noted focus on the use of volumetric clouds and in-game weather conditions as gameplay mechanics.

Three years have passed since the last major continental war and now the Kingdom of Erusea, formerly the Federal Republic of Erusea, has come into conflict with the Osean Federation. Princess Rosa Cossette D'Elise claims that Osea has violated her kingdom's sovereignty by forcing the construction of their Space Elevator on their territory, and has declared war in retaliation. You take on the role of Mage 2, codename Trigger. After a rescue mission goes wrong, Trigger finds himself being thrown into the 444th Fighter Squadron — aka the Spare Squadron — composed of other prisoners, where he must work off his crimes while keeping Osea safe. The game is set between May and November 2019 of the Strangereal calendar, taking place a year before the Leasath-Aurelia war in October 2020.

Announced near the end of 2015, the first trailer, found here,

shows an Osean F-22 Raptor chasing after an Erusean Su-30M2 as they approach a Space Elevator called the "Lighthouse." A second trailer,

showcased at the PlayStation Experience 2016, provides more exposition, establishing that the two countries are at war. See here

for the Gamescom 2018 trailer. The game was released on January 18 2019 on PlayStation 4 and Xbox One, and February 1st for PC; the first multi-platform release since Ace Combat: Assault Horizon.

Can you hear me, troper with the three strikes?