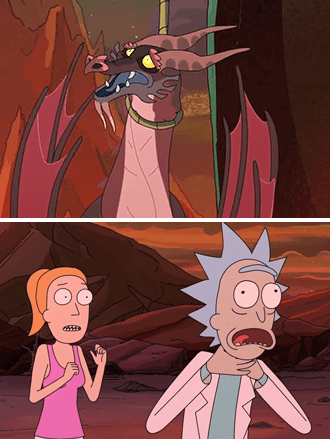 Do you know how long it takes to hang a dragon? Rick sure does.
Xamot: (grunts in pain)
Alpine: Hey, I never laid a glove on you!
Xamot: I feel... what my brother feels...
Alpine: Terrific! Pass this on! (punch)
— G.I. Joe: A Real American Hero
Advertisement:

Two people are linked together, or a person is linked to an object, such that whatever happens to one also happens to the other. Killing or harming one of them will lead to the death or equivalent harm of both. You wouldn't think this would be desirable, but it works the other way too; see Empathic Weapon.

If enemies are linked together, and are therefore forced to protect or aid each other to ensure their own safety, this becomes a form of Chained Heat.

Twins in media tend to experience this a lot as Twins Are Special, made famous by Alexandre Dumas's novella, The Corsican Brothers. It's also common with the Enemy Without.

Frequently goes hand-in-hand with a Psychic Link, because Your Mind Makes It Real, and sometimes with Mindlink Mates or Twin Telepathy. Compare My Significance Sense Is Tingling. Can be exploited for very interesting effect. See also Shared Life-Meter, a related video game trope. Reality Changing Miniature is a variant of this, where an object or person is linked this way with its representation.

If the link can ensure the death of a participant but doesn't otherwise transmit pain or other feelings, then it isn't a Synchronization but a case of Can't Live Without You. Compare Psychic Glimpse of Death, where one party experiences the death of another while connected to their mind but is able to survive, and Shared Life Energy, in which life energy is shared to save a life. Compare Remote, Yet Vulnerable.