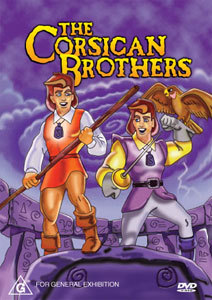 In the Citadel of Defranche twin brothers, Lucious and Lucien, are born to the count during a siege. A prophecy stated that when this occurred the House of Defranche would fall. The same prophecy stated that the twins would restore their family on their 18th birthday. Trusting to the prophecy, Count Defranche entrusts his sons to his Captain of the Guard and his inventor and sends them in separate ships. The boys are given magic amulets to prove their identity when the time came.

Eighteen years later, the two brothers reunite on schedule. Captain Orlandi and inventor Bambino tell the boys of their true heritage and put the final stages of their operation into motion. Adding to their motivation is Countess Isabelle Gravini who Lucien rescued from a runaway coach. She was on her way to the home of her new guardian, unaware that this was a trick to lure her to the citadel of the villain.

This 1989 cartoon by Burbank Films Australia is an adaption of an 1844 novella by Alexandre Dumas, père first published in 1844. The story has been adapted many times on the stage and in film since 1898.

The Corsican Brothers provide examples of the following tropes: