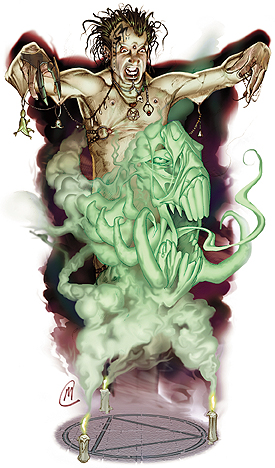 Something tells me he's not summoning Crystal Dragon Jesus.
All the girls on the block knockin' at my door!
(I got the recipe!)
Wanna know what it is make the boys want more!
(Now you belong to me!)
— "Black Magic", Little Mix
Advertisement:

"Bad" powers, the stuff that the Anti-Hero, Evil Sorcerer or Wicked Witch uses, and the Evil Counterpart of White Magic. Probably called this because we tend to think of darkness as evil. If heroes use it, they're headed for a fall, or at least An Aesop. Black Magic has the tendency to corrupt more than just the actions it enables.

There are three factors that determine whether a power is Black Magic or not.

As a rule, any of these factors will make something Black Magic; they can't be offset by the others being positively good.

Also beware of the side-effects. Gaining and using Black Magic will often have a "corrupting" effect on its practitioner's character, causing grey actions to go to black very quickly. This generally coincides with a similar degradation of the practitioner's mental stability, or at least give rise to a thought that they are Above Good and Evil. More often than not, it also causes rapid degradation of the user's own body, requiring more Black Magic to maintain their physical condition. Even if not, the power they have accumulated may eventually entice them to seek immortality.

For a more detailed description of side-effects, see This Is Your Brain on Evil. If a partial Demonic Possession is the source of your Black Magic, you are in very real danger of a total Grand Theft Me—heck, you may be in danger of this even if it isn't.

In some settings, all magic (or at least magic that doesn't come from the gods or some other divine source) is Black Magic; for this, see Magic is Evil.

Remember that Evil Is Not a Toy. See also Artifact of Doom and The Dark Arts. Compare and contrast White Magic. May overlap with Casting a Shadow to some extent.

A practitioner of Black Magic could be "dark but not evil" if he's a sympathetic figure—perhaps a Reluctant Monster Blessed with Suck. See Heroic Willpower, Faustian Rebellion and Bad Powers, Good People. Not to be confused with Black Mage, which is all attack magic and no healing, though there can be some overlap because this trope doesn't usually lend itself to healing, either.