Main Character Index
Members of the X-Men team originating in X-Men: First Class and the team's additions in the timeline that was created by X-Men: Days of Future Past. 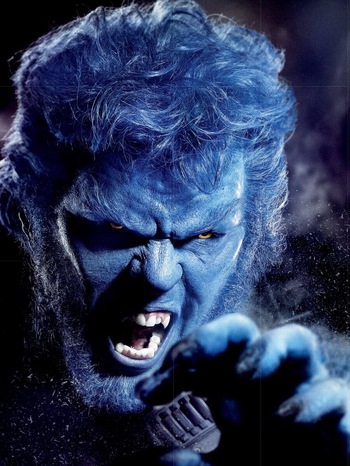 "I think the world needs the X-Men."

Click here to see younger Hank as a human 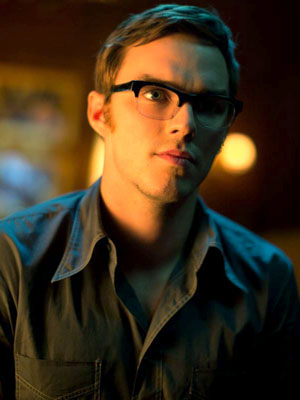 Charles: "In each of us, two natures are at war."
Hank: Robert Louis Stevenson, Jekyll and Hyde.
Charles: Top marks. The story wasn't really about good and evil though, was it? It was about man's animal nature and his struggle to control it, to conform. And it's that struggle which is holding you back.
Hank: No, Jekyll was afraid of what he could be capable of.
Charles: And you are, too.

A close friend of Charles Xavier and a co-founder of the X-Men. A brilliant scientist, Beast's mutation leads him to be covered in blue fur and have heightened strength and agility. He develops the technology that the team requires to carry out missions.

For tropes applying to Beast in the original timeline erased by X-Men: Days of Future Past, see the X-Men (Original Timeline) page.
Alex Summers / Havok 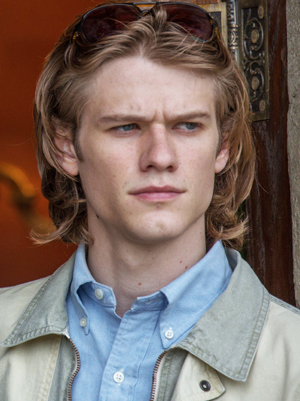 "Get back when I tell you."

Played By: Lucas Till

A mutant who has the ability to absorb energy and discharge it as blasts. He is the much older brother of Scott Summers. 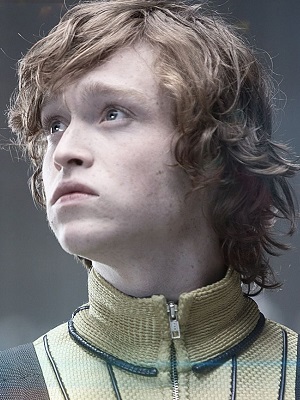 A mutant capable of ultrasonic screaming, used in various ways including as a means of flight and sonar. 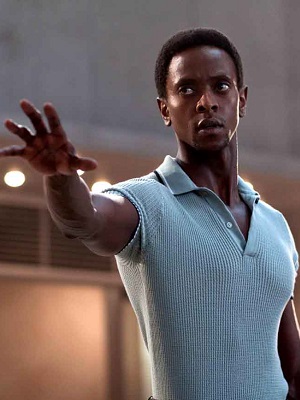 "Well, Darwin's already a nickname and it fits: "adapt to survive" and all..."

A mutant with the power of "reactive evolution." 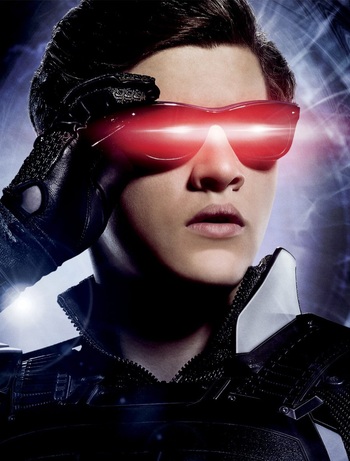 "[Alex] felt you were the one that's gonna do something special with your life. That you were gonna make the difference in the world. Maybe even change it."
— Jean Grey

Havok's younger brother, a snarky mutant who discharges kinetic energy blasts from his eyes. He has even more trouble controlling his powers than Alex.

For tropes applying to Cyclops in the original timeline erased by X-Men: Days of Future Past, see the X-Men (Original Timeline) page.
Advertisement:
Ororo Munroe / Storm 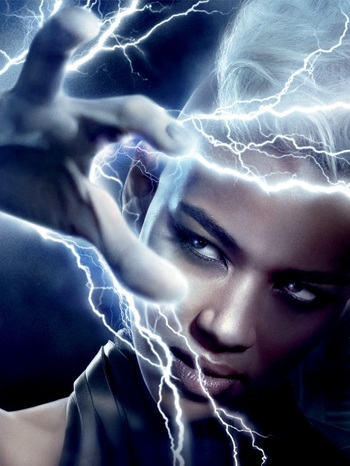 "You can't save the world, just going around killing people. There's laws, system and place for that kind of thing."

"Sometimes, you want to believe that people are something that they are not. By the time you realise who they are, it's too late."

A young mutant in Cairo who steals things to feed the street orphans she has taken under her wing. Apocalypse recruits her as one of his Horsemen by exploiting her desire to right injustice in the world.

For tropes applying to Storm in the original timeline erased by X-Men: Days of Future Past, see the X-Men (Original Timeline) page.
Peter Maximoff / Quicksilver 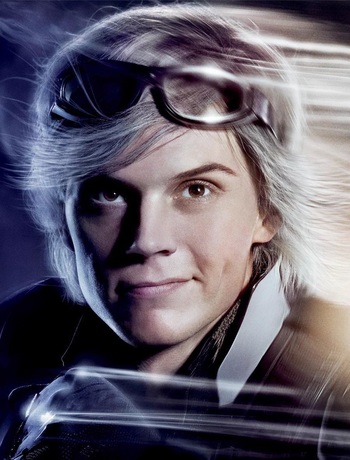 "I mean, I still live in my mom's basement, but pfft. Everything else is, uh... well, it's pretty much the same. I'm a total loser."

For the "Pietro Maximoff" version of the character featured in the Marvel Cinematic Universe, see here.
"[Magneto] left my mom before I was born. I met him ten years back, but I didn't know it was him. By the time I figured it out, it was too late. Then I saw him on TV again, and I came to the house looking for him, but by the time I got there... Late again. You know, for a guy who moves as fast as me, I always seem to be too late."

A mischievous speedster who is a member of the X-Men in the Alternate Timeline. He is the son of Magneto. 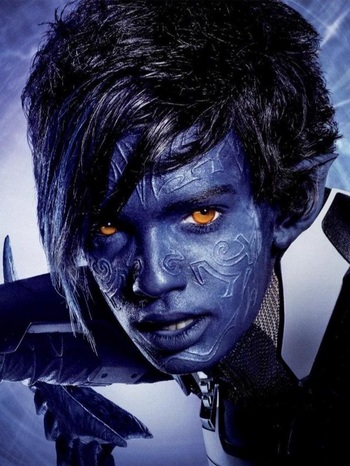 "It's my first time in America. I'm very excited to see your culture."

A teleporting, Catholic mutant who looks like a blue-skinned devil. After fleeing from East Berlin, he becomes a student at Xavier's school and a member of the X-Men in the Alternate Timeline.

For tropes applying to Nightcrawler in the original timeline erased by X-Men: Days of Future Past, see the X-Men (Original Timeline) page.
Jubilation Lee / Jubilee 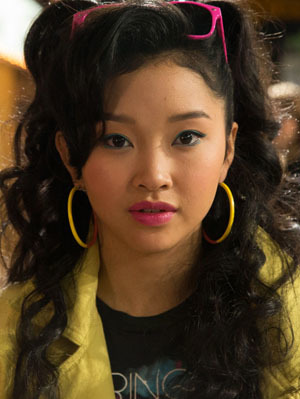 A student at Xavier's School for Gifted Youngsters who can generate colorful energy bursts. 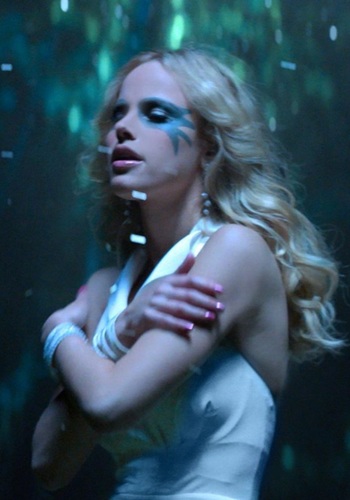 A mutant singer with light-generation powers 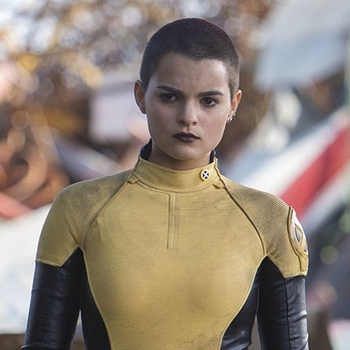 A student at the Xavier School for Gifted Youngsters who is under the tutelage of X-Men veteran Colossus. 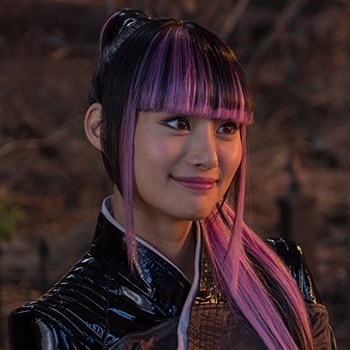 A Japanese student at the Xavier School for Gifted Youngsters and the girlfriend of Negasonic Teenage Warhead.

For tropes applying to Yukio in the original timeline erased by X-Men: Days of Future Past, see the Other Mutants (Original Timeline) page.
Piotr Rasputin / Colossus 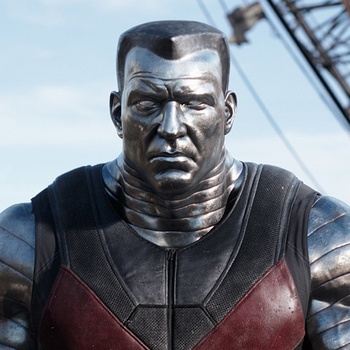 "That's how we do it in Mother Russia."

A mutant who can transform his body into living steel, granting superhuman strength and a resistance to damage and temperature.

For tropes applying to Colossus in the original timeline erased by X-Men: Days of Future Past, see the X-Men (Original Timeline) page.
Kitty Pryde / Shadowcat