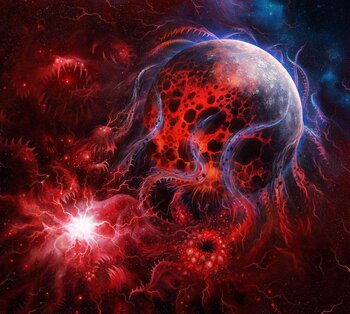 "Between the stars the ancient unseen enemies of mankind wait and hunger. Every voyage into the nothing is a confrontation with horror, with the implacable things of the warp, and with man's own innermost fear."
Forget the power of technology, science and common humanity. Forget the promise of progress and understanding, for there is no peace amongst the stars, only an eternity of carnage and slaughter and the laughter of thirsting gods.
Advertisement:
Have we exhausted all possible ways to divine the future? How many scribes must toil to scratch their visions onto ancient parchments so that we might catch a glimpse of hope? Or are we to suffer only the pangs of despair as yet more horror is let loose on our dreams? Or does the seeking itself give birth to more insanity than man can cope?
The Dark Future Beckons!
Fear the unknown!

As the origin of the term Grim Dark, it's no surprise that Warhammer 40,000 is a setting positively drowning in horror. And we wouldn't have it any other way.

Works with their own Nightmare Fuel pages

WARNING: Per wiki policy, Spoilers Off applies to Nightmare Fuel pages. All spoilers will be unmarked!

The Forces of Chaos

The Chaos Gods
The Warp
Possibly the ultimate example of Hyperspace Is a Scary Place, the Warp, also known as the Immaterium, is an alternate dimension that manifests the thoughts and emotions of all conscious life, and implied to serve as the 'afterlife' of the galaxy, if not the entire universe. It's a Hellish churning realm brimming with daemons and the aforementioned Chaos Gods. Time, space, and logic have absolutely zero meaning in this realm. Every single dream, nightmare, metaphor, thought, feeling, and idea by any sentient being in real space has a physical manifestation within the Warp. There is an embodiment for absolutely everything imagined by anyone, including Things Man Was Not Meant to Know. It is ruled over by the four god-like incarnations of Rage, Deception, Despair, and Lust.
Chaos Characters
Advertisement:
Chaos Legions
Helbrutes and other living-death machines
Dark Mechanicum

The Emperor and Primarchs
Space Marines
Imperial Guard
Imperial Inquisition
Adepta Sororitas (and Ecclesiarchy in general)
Adeptus Mechanicus
The Tech-Priests of the Adeptus Mechanicus are living scifi body horror. Not only do they occasionally replace half their brain with a computer to free themselves from emotions, but they're one of the most powerful forces in the Imperium. This wouldn't be so bad until you consider how many of them are horrible, horrible people - Archmagos Khobotov from Soul Drinker basically thinks "The Soul Drinkers have an ancient right to the Soulspear, since it's their holiest relic. I don't. I'm going to take it anyway." They literally do not care about anything other than the technology - no honour, no justice, definitely not other people's lives. They will gladly put an entire world's population at risk in order to have a chance to loot a Necron tomb, and tend to act offended when people wall off Necron tombs rather than letting themselves get annihilated by psychopathic robot skeletons. And they're so powerful no-one will ever be able to do anything about it. Nice or ineffectual and sympathetic versions (like Antigonus in Dark Adeptus, Felicia in Death or Glory, Ernulph and Logash in Caves of Ice, also multiple characters in Titanicus) do exist; indeed, they probably don't include a higher percentage of bastards than the Administratum. However, their really nasty members are in a position to screw over trillions of people in the name of the Omnissiah.
Officio Assassinorum
The little-mentioned Oficio Assassinorum is Exactly What It Says on the Tin. They are a very secretive group that train assassins, with each sub-group or "temple" using distinct methods of assassination. The idea of the vast and powerful Imperium directing their ire at a single individual is frightening enough, but the methods used by each of the temples range from unnerving to outright horrifying:
Psykers
Mutants
Servitors
Servitors are either vat-grown clones or criminals/dissidents/failed teammates (usually the second - there is no shortage of troublemakers...) who are lobotomized so that they cannot act without bio-programs from the setting's tech-priests. They then have useful cybernetics attached to their bodies, be they engineering tools, sensors, calculators, or heavy weapons. Since the Imperium has a ban on artificial intelligences, some servitors are simply wired into vehicles or other machines to serve as semi-organic computers. The one saving grace is that there is little enough mind left that the Servitors are even sentient anymore. Hopefully. There are some who speculate that the mind-wiping process may not always prove 100% effective, and that the fragmented remains of servitors' consciousness are still trapped in there, desperately trying to piece themselves together.
Imperium and general background material

Tyranids
Eldar
Dark Eldar
That's not a human soul... it's xenos. Someone... someone tore out their souls and put something else in there.
— Nisryus, Bleeding Chalice
Necrons
Orks
Tau & Allies
Miscellaneous alien races