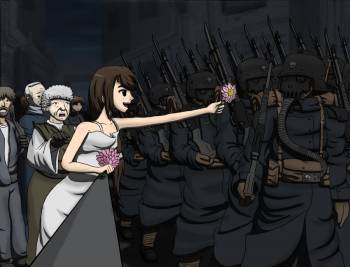 The soldier hesitated for a moment, looking at the gift being presented to him, then he moved back into formation. He didn't take it, but she was sure that he wanted to.

Yes, it's true. Even in a game that's so dark and edgy it makes Berserk look like a Disney movie, there are still heartwarming moments.

Dan Abnett, in his introduction to the Imperial Guard Omnibus (Vol 1), fittingly sums it up best with this quote:

In the grim darkness of the far future there is more than war. There are real people there too.

Why is this heart-warming? Because the character was named after a 12 year old Space Wolf fan who died of cancer and thanks to a community campaign he was added as an official part of 40K lore. Thanks to Games Workshop Brand will forever be part of the hobby he loved.