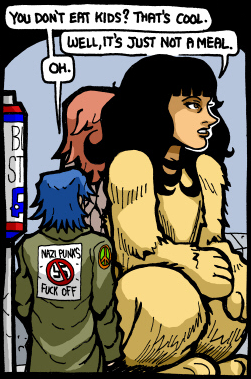 Her Character Alignment is Stomach.
Eliphas: You allow them to escape, Lord Araghast?
Araghast: Because it serves me, Eliphas! If we kill them now, we waste the value of the traitor in their ranks. Your vengeance can wait.
— Dawn of War II: Chaos Rising
Advertisement:

"Even Evil Has Standards" has subversions.

Pragmatic Villainy is when a villain either refuses to do something horrible or does something nice. It's not because the action is too evil even for them, nor is it a genuine Pet the Dog moment. No, it's because it's in their best interest to not act the maggot this time. Whatever the situation might be, choosing the most evil option would be counter-productive to The Plan. As such, the Pragmatic Villain doesn't take this evil option, instead opting for something a little less evil or even genuinely good.

Even a villain finds it furthers their aims to be nice from time to time, even if it's just for show or to ensure loyalty. Maybe there's dog-kicking in their past; even if there isn't, the Pragmatic Villain is the type to have studied those who have. No matter the combination of dogs and boots, they're sure to have investigated them all quite thoroughly and come to the conclusion that there just isn't anything to be gained by kicking this particular dog. They may even note that one's proverbial toes get a little tender after too much of that kind of thing, since a dog kicked too often is a dog that will bite back. Though a pragmatic villain is likely to be less destructive than their Card-Carrying Villain counterpart, they are made all the more dangerous by their focus on their ultimate goals and their reluctance to carry the Villain Ball.

Oftentimes, their course of action is determined solely by discerning which would best serve their purposes. Being evil, to them, just keeps their options open when it comes to illegal and immoral acts, and doesn't stop them from using 'legitimate' (or at least socially respectable) strategies and tactics if that's what it takes. Heroes are sometimes surprised when said villains do something "unexpectedly" evil later when they were doing good things before. Should kicking the dog become a necessary step in their master plan, expect their kick to have the power and precision of an American football player going for a game-winning field goal, usually while stating it's Nothing Personal. They will happily cross the Moral Event Horizon, but only if and when it's useful for them to do so, and not a moment sooner.

Virtually any Villain with Good Publicity tends to be a master of this trope. Villains With Good Publicity almost always have years of experience in earning the trust of their supporters and are well aware that angering dog-lovers (among others) will not advance their cause. In fact, it may hinder it. Even for those who don't happen to be Affably Evil, if any dog-kicking is deemed necessary, they will keep these acts of cruelty out of the public eye, or when they can't do that, they'll do what they can to make it look like the victim deserved it; how evil they truly are under cover of darkness must remain shrouded. They also tend to be masters of the Xanatos Gambit. The Noble Demon will probably attempt to justify his nobility this way, with varying degrees of success in passing it off as pragmatism. Whenever there's a Generic Doomsday Villain or an Omnicidal Maniac around, there's a good chance the other villains will form an Enemy Mine with the heroes to stop them, as they want to rule the world, not destroy it. Or at least not steal their job of fighting the heroes. Even most Chaotic Evil Ax-Crazy villains who do things For the Evulz fall to this trope. There's no fun or challenge for them if everyone's dead — they'd be left forlorn with no idea what to do next. An Incidental Villain most often excels in this with his worldview generally being that of a Monopoly game where advancing towards their goals through the quickest and most efficient way is the only thing that matters to them and beating the rivals on their way is optional and hardly obligatory much of the time. This mindset is helpful in stories where the bad guys have a huge advantage over their antagonists, leading them to not so much beat them, as much as convince them that it will be more profitable not to commit the crimes that they intended to and instead choose a legit way as an alternative.

An obvious foil to villains with Complexity Addiction (who will do the evil deed anyway), though some do manage to pair the two. A subtrope is Can't Kill You, Still Need You if applied to villains. Contrast Stupid Evil, where the villain hurts their own interests by preferring indiscriminate evil. Compare and contrast Shoot the Dog, where a hero or anti-hero does a morally questionable act for pragmatic reasons. See also Cooperation Gambit, Cut Lex Luthor a Check, Dick Dastardly Stops to Cheat, Sanity Has Advantages, and Bread and Circuses. Compare Evil Virtues, where a villain has good traits; Straight Edge Evil, where a villain avoids personal vices; and Nominal Hero, where a character does heroic acts out of neutral-at-best motivations. For the less evil and more moderate version of this trope, see Jerk with a Heart of Jerk.

Note: It is extremely rare for a Complete Monster to invoke this trope, as they are usually unrestrained and do not care if their evil will backfire. In the few examples that do exist, a CM's simplicity is often downplayed by the heinousness of their plans.

Paige gets Helen drunk on mulled wine hoping she'll slip up and reveal something that can help her stop the park deal from going through. It turns out Helen was never drunk and purposely tipped Paige off because she didn't trust the park deal and needed her help.

Example of:
In Vino Veritas

Paige gets Helen drunk on mulled wine hoping she'll slip up and reveal something that can help her stop the park deal from going through. It turns out Helen was never drunk and purposely tipped Paige off because she didn't trust the park deal and needed her help.