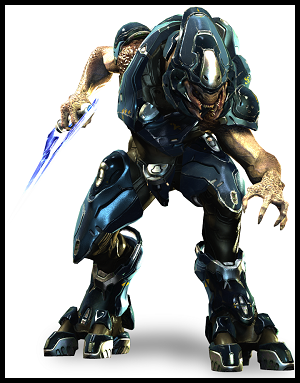 The second founding race of the Covenant, the Sangheili are a Proud Warrior Race in charge of everything military within the Covenant, and are the most variable enemy in the games. Tall, bipedal saurians, the Sangheili's lives revolve around honor and combat, and social standing is reliant on one's acquisition and skills in both. Prior to the Human-Covenant War, they were the right-hand of the Prophets, upholding their will and crushing all opposition. The events of Halo 2, however, saw their fall from grace in the eyes of the Covenant due to the machinations of the current High Prophets, leading to an Enemy Mine with humanity in pursuit of vengeance. Following the war, they traveled back to their homeworlds, where they realized that the thousands of years spent as a race of warriors had dulled their skills in every other aspect, particularly with regards to social organization and science. To top it off, their internal ideological and pragmatic differences have lead to civil war even as various factions continue their fight against the Brutes and/or humanity. 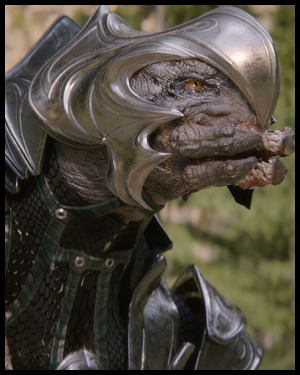 One of the Covenant's most renowned military leaders, Thel 'Vadam (known as Thel 'Vadamee while serving the Covenant military directly) was the former Supreme Commander of the Fleet of Particular Justice and kaidon of the State of Vadam on Sanghelios, but fell into disgrace after a serious failure. Given one last chance to redeem himself (or die trying) by stepping into the armor of the Arbiter, he becomes the second main Player Character in Halo 2 and Halo 3, eventually spearheading a diplomatic and military effort to rebel against the Covenant and seek alliance with humanity. After the end of the Human-Covenant War, he is regarded by most as the formal, interim leader of the Sangheili, and is seeking to end his people's civil conflicts, with those following his banner known as the Swords of Sanghelios.

During the events of Halo 5: Guardians, he is contacted by SPARTAN-IV Jameson Locke to help him track down the AWOL Master Chief. 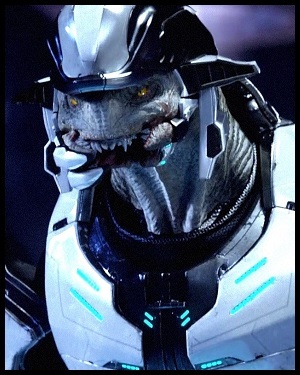 Homeworld: Sanghelios
Birthdate: September 21, 2487
Debuted in: Halo 2
Voiced by: Robert Davi
"You are the Arbiter, the will of the Prophets, but these are my Elites. Their lives matter to me, yours does not."

Originally Spec-Ops Commander of the Fleet of Particular Justice, Rtas accompanied the Arbiter on several missions in Halo 2, then left to reclaim a Covenant vessel from Brutes after the Great Schism. He returns in Halo 3 as Shipmaster of the Shadow of Intent (and Fleetmaster of the Fleet of Retribution), and allies with humanity to combat the Flood and the Prophet of Truth. After the events of Halo 3, he continues to serve as one of the Arbiter's most trusted commanders. 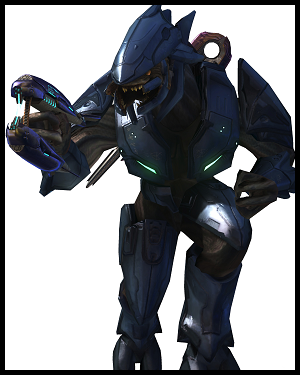 The third player character in Halo 3's co-op mode, N'tho was the youngest member of his Special Operations unit near the end of the Human-Covenant War, joining the Fleet of Retribution after the outset of the Great Schism. After the war, he becomes an adjunct to the Arbiter. 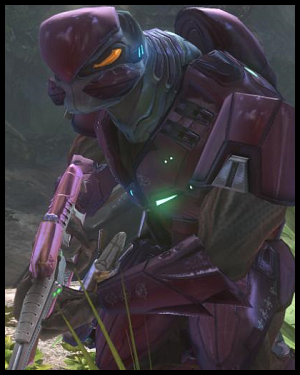 A top graduate from the most famed war college in Sangheili space, Usze is a distinguished Special Warfare Group veteran who has evaded countless punitive actions and at least two assassination attempts. He is the fourth player character in Halo 3's co-op mode, as a member of the Fleet of Retribution's security force.

A female Sangheili Shipmistress who aids Fireteam Osiris during the events of Halo 5: Guardians by piloting a Phantom. 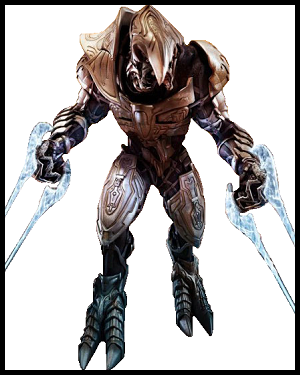 Homeworld: Malurok (Moram)
Birthdate: June 2, 2478
Debuted in: Halo Wars
Voiced by: David Sobolov
Prophet of Regret: "Do you enjoy the slaughter?"
Ripa: "I feel the joy of doing what I was born to. I have no regrets, save that I will not die fighting."

Originally a prominent warrior who participated in numerous important campaigns against rebellious Unggoy and Kig-Yar, Ripa was imprisoned following an attempted coup of his clan. Picked to become Arbiter by the Prophet of Regret, he was given command of the Fleet of Glorious Interdiction and charged with spearheading humanity's destruction, being the Dragon-in-Chief of Halo Wars. Notable for deviating from Elite's Honor Before Reason mentality: he just wants to kill things. 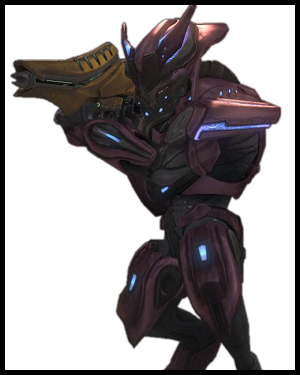 An elusive and mysterious character who appears several times in Halo: Reach. Little is known about him other than that he was a high-ranking member of the Devoted Sentries, a hand-picked unit of Zealot artifact hunters attached to the Fleet of Valiant Prudence. 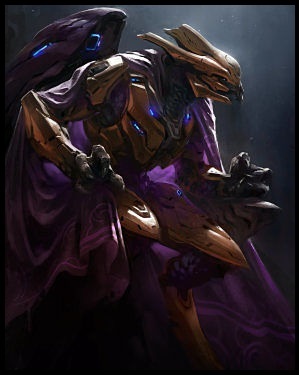 An agent of the Ministry of Fervent Intercession, Rho 'Barutamee led the Fleet of Valiant Prudence, an archaeological research and retrieval group tasked with the security and stewardship of Forerunner artifacts. During his search for the fabled Capital of the Forerunners, his fleet inadvertently stumbled upon the location of Reach, thus starting one of the largest battles of the Human-Covenant War. 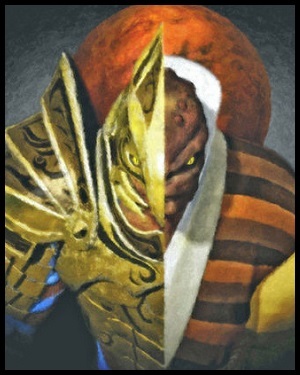 A prominent Sangheili leader from about four centuries before the events of the original trilogy, who got into trouble with the Hierarchs for his lack of belief in "the Great Journey". 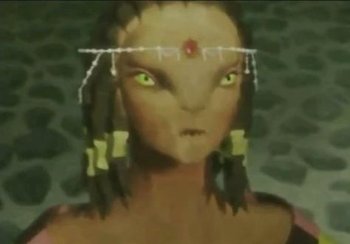 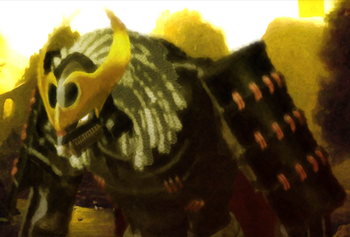 "There will be time for talk when I rule in your stead and declare your shame, Arbiter."
Homeworld: Sanghelios
Birthdate: Unknown
Debuted in: The Duel
Voiced by: Josh Grelle
A Sangheili warrior assigned by the Prophets to eliminate Arbiter Fal 'Chavamee and his closest kin as punishment for their defiance.
Major Thel 'Lodamee 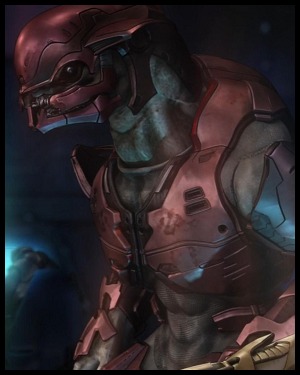 A Sangheili Major in the Third Fleet of Glorious Consequence who lost his entire battalion at Miridem.

A member of the Fleet of Particular Justice's Spec-Ops division who develops an obsession with killing the Master Chief during the events of Halo: Combat Evolved.

The former second-officer aboard the Incorruptible, Voro executed his mentor and shipmaster Tano 'Inanraree during the beginning of the Great Schism after the latter tried to fly the ship onto Halo to allow its crew to be infected by the Flood. Taking over as Shipmaster, Voro quickly distinguished himself through quick thinking and rationality, stopping the Flood from spreading off Halo and High Charity. He was granted the rank of Fleetmaster and sent to investigate the world of Onyx, where an intercepted human transmission had revealed it contained a Forerunner ruin which was guarded by Spartans.

A young Ranger who served with the Covenant during its early years, Vil is more imaginative than most of his kind.

The nephew of High Councilor Torg 'Gransamee, G'torik is a dear friend of Zo Resken.

An engineering officer, Tul finds himself part of a small group attempting to escape High Charity during the outbreak of the Great Schism.

Shipmaster of the supply ship Journey's Sustenance, D'ero was stationed at High Charity during the outbreak of the Great Schism. 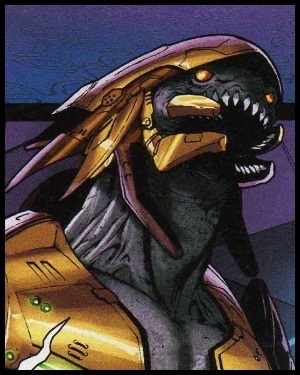 One of the last two survivors of the Talam lineage, Thon spent his entire life looking after his weaker brother Reff. By mid-2552, he had become Shipmaster of the assault carrier Clarity of Faith, but would find himself and his crew trapped on a mysterious world after their ship was shot down by Forerunner Line Installation 1-4. 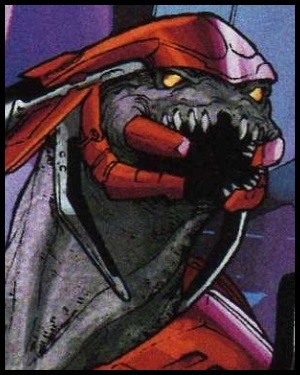 One of only two surviving Talam, Reff was born weaker than most Sangheili males, but his vision convinced his brother Thon to look after him his entire life. By mid-2552, he had become the fervently religious second-in-command of his brother's assault carrier Clarity of Faith, but would find himself trapped alongside the rest of the crew on a Forerunner world after their ship was shot down by Line Installation 1-4. 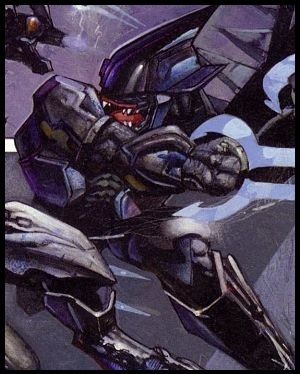 Homeworld: Unknown
Birthdate: Unknown
Debuted in: The Last Voyage of the Infinite Succor

A high-ranking commander of the Fleet of Particular Justice's Special Operations unit in late 2552, 'Kusovai is renowned as its best swordsman. 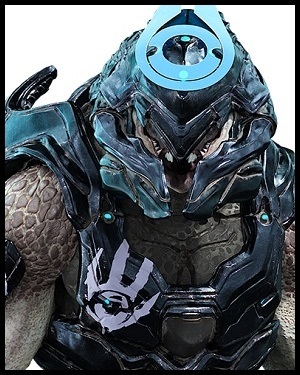 The elder of Bekan Keep in Mdama, Jul is a former Shipmaster who hates humans and refuses to accept Arbiter Thel 'Vadam's plans to make peace with them, and allies with the Servants of the Abiding Truth to assassinate him. He is captured by ONI team Kilo-Five and studied by ONI scientists in a Forerunner shield world, but manages to escape through a portal and ally with a group of ultra-religious Sangheili after providing them with the location of the Didact, whom he hopes to use to gain revenge upon humanity. He eventually becomes the leader of a Covenant remnant hoping to gain entrance to Requiem. 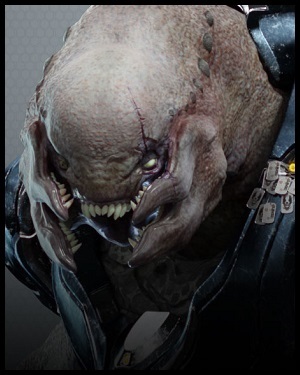 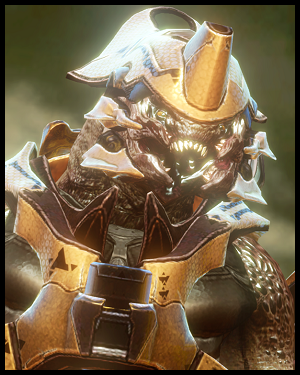 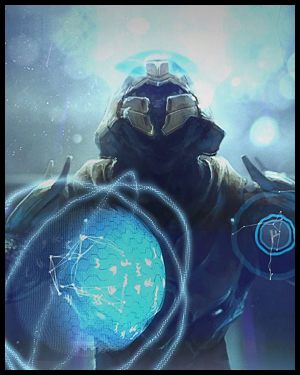 A Covenant cult leader who led an assault on the human colony of Draetheus V. 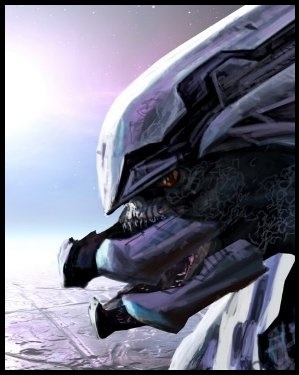 Homeworld: Saepon'kal
Birthdate: May 29, 2485
Debuted in: Halo: Glasslands
"A god who creates tools is still a god. It is not for us to impose qualifications upon the divine or presume to guess its intentions."

A former Field Master and translator for the Covenant military, 'Telcam is the leader of the Servants of the Abiding Truth, an ultra-religious sect that still believes the Forerunners to be gods after the Great Schism, and plans on overthrowing Arbiter Thel 'Vadam due to his denouncement of the Forerunners and their technology. He secures support from ONI, who wish to weaken the Elites military power via a civil war, on the condition that 'Telcam not continue the war against humanity. 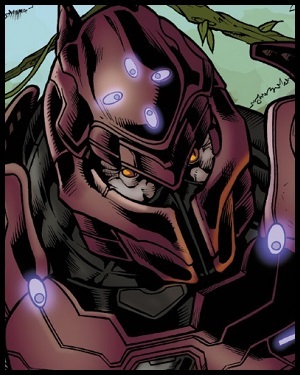 A former member of Jul 'Mdama's remnant faction who, disillusioned by what he sees as 'Mdama's increasingly heretical actions, declares himself to be the true "Hand of the Didact" and forms his own splinter faction.

See "Elites" in the Halo: The Banished page.

See "Ussans" in the Halo: Other page.

Once a proud Fleetmaster of the Covenant, Rojka found himself demoted in the wake of the ascension of the Brutes to the dominant military power and found himself forced to watch over a fleet derelict warships around Sanghelios, where he was unable to do much to aid his brethren in the Great Schism to follow. When his homeworld of Glyke was mysteriously destroyed days after the end of the Human-Covenant War, Rokja took his fleet and the survivors of the destruction to the abandoned Outer Colony of Carrow, where they settled and named Rakoi in an attempt to make a new life for themselves with himself as kaidon. When the former human colonists returned to Carrow to resettle, Rojka allows them to claim half the planet for themselves, not wishing to spark another war, but in his heart he still desires vengeance on the ones he knows were responsible for the destruction of his old home: The SPARTAN-IIs known as Gray Team. 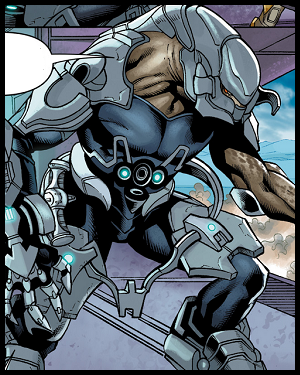 A former member of Jul 'Mdama's remnant faction who left and formed his own mercenary faction. He's the leader of the Covenant forces that attacked the peace delegation on Ealen IV.

See the Halo: Other page for more details.