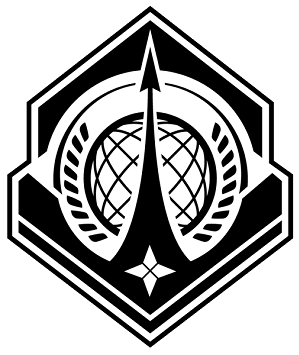 The backbone of the UNSC military, the Navy is primarily responsible for spaceborne operations, making it the main line of defense for Earth's colonies. 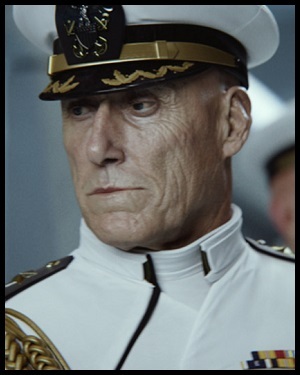 Homeworld: Earth
Birthdate: September 4, 2490
Debuted in: Halo: First Strike
Voiced by: Ron Perlman
"We will take our city back. And drive our enemy into the grave they've been so happily digging."

The Chief of Naval Operations and commander of the Earth Home Fleet at the start of Halo 2 and de facto leader of humanity in Halo 3. 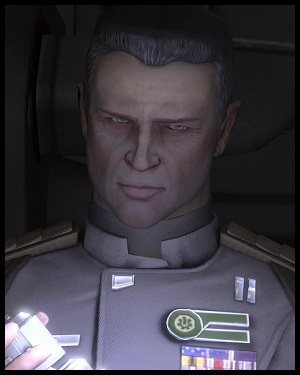 The captain of the Pillar of Autumn, Keyes is legendary for his unorthodox tactics and skill. He assisted Dr. Halsey in selecting candidates for the Spartan-II program, and later had his daughter Miranda with her. In 2552, he was selected to transport the Spartan-IIs on a mission to capture the Prophets, but the mission is scrubbed by the Fall of Reach, with the Autumn forced to make a blind slipspace jump that sends it to Halo. 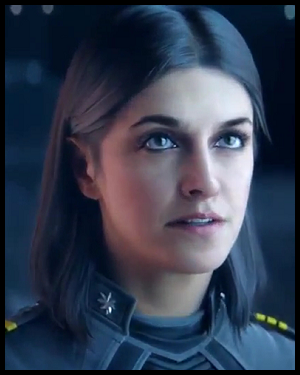 The daughter of Jacob Keyes and Catherine Halsey, Miranda followed in her father's footsteps and joined the UNSC Navy, rising to the rank of Commander by 2552. When the Covenant attacked Earth, Miranda followed the Prophet of Regret's ship back to Delta Halo, where she forged an alliance with The Arbiter to stop the activation of the Halo Array. Upon returning to Earth, she joins the resistance against the occupying Covenant forces, leading a Human contingent through the portal at Voi to find the Ark. 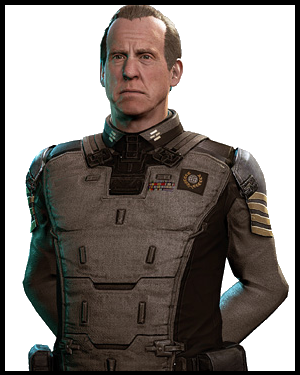 The captain of the UNSC Infinity, the most powerful warship ever built by humanity. Del Rio is known as being a competent by-the-book captain, but not being very good at inspiring loyalty among his crew. In 2557, Del Rio commands the forces of the Infinity after it crash lands on the Forerunner shield world of Requiem and finds Spartan John-117 fighting a radical faction of the Covenant and Forerunner Prometheans. After returning to Earth, Del Rio retired from service and became a UEG Senator representing the Jovian colonies. 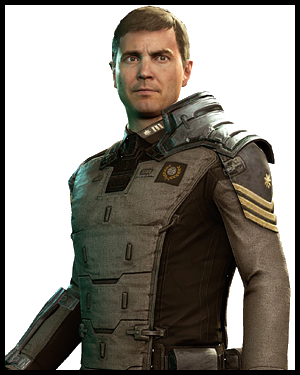 The executive officer of the UNSC Infinity in 2557, Lasky was an officer cadet at the Corbulo Academy of Military Science in 2526. While initially unenthusiastic about being part of the UNSC military, Lasky's life was changed when the Covenant attacked the academy, resulting in an encounter with Spartan John-117. After surviving the Human-Covenant War, then-Commander Lasky became the executive officer of the Infinity, and fought alongside John-117 once more on the Forerunner shield world of Requiem. Afterwards, he was promoted to Infinity's captain. 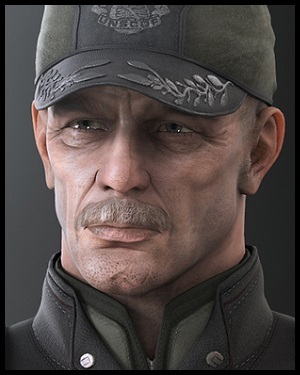 Homeworld: Reach
Birthdate: June 12, 2478
Debuted in: Halo Wars
Voiced by: Gregg Berger (Halo Wars), Gideon Emery (Halo Wars 2)
"Where you see half a crew, Isabel, I see family, courage. And a thousand heroes who swore to fight their way through hell before they'd ever... EVER turn their backs and run. And where you see one old ship, I see home. And that is always worth fighting for!"

A well-respected naval officer and a veteran of fighting against the Insurrection, Cutter was placed in charge of the UNSC Spirit of Fire during the campaign to retake the colony of Harvest. He was also charged with investigating Covenant activity on the planet and protecting Professor Ellen Anders, which led to a discovery that sent him pursuing a Covenant fleet across the galaxy. 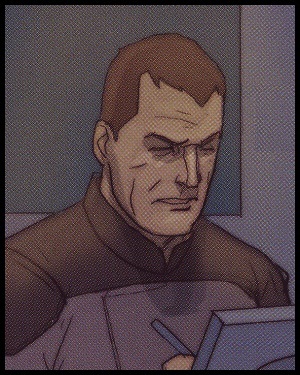 Homeworld: Earth (Mark Twain, Missouri, United Republic of North America)
Birthdate: November 3, 2470
Debuted in: Halo: The Fall of Reach (Mentioned only), Halo: The Cole Protocol (First direct appearance)
"They told me to fight, and that's what I've done. Let historians sort through the wreckage, bodies, and broken lives to figure out the rest."

The most brilliant UNSC Admiral, Cole was Earth's greatest hero during the early years of the Insurrection before being forced to retire in disgrace after the discovery of his second wife's true identity. He was asked to return to active duty when the Covenant began their war against humanity, leading the largest UNSC fleet ever assembled in countless battles against the Covenant, becoming the only fleet commander to routinely win against the alien menace. His fight came to an end at the Battle of Psi Serpentis, where his tactics destroyed around three hundred Covenant ships at the cost of his vessel and life. 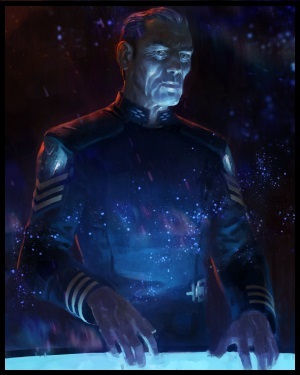 The head of ONI Section Three from 2512 to 2530, he resigned his post at ONI to fight on the frontlines against the Covenant fulltime. It was partly under his direction the Spartan-II project came about, and Section Three was at is busiest under his command. He was killed during the Fall of Reach.

The Deputy Chief of Naval Operations in 2552, Whitcomb was trapped on Reach when the planet fell. He sought refuge with a group of surviving Spartan-IIs, directing hit-and-run raids on occupying Covenant forces until they were rescued from the planet by John-117. Also, he claims to be descended from Russian Cossacks, despite speaking with a Texas drawl. 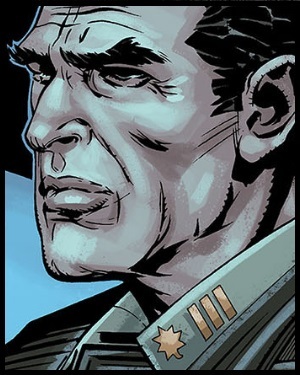 A former Spartan-II candidate, Musa was permanently crippled by the augmentations, but found his place as an officer in the Navy. After the end of the Human-Covenant War, he founded the SPARTAN-IV program, with himself as head of the newly created "Spartan" branch. 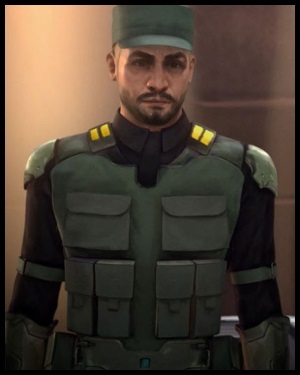 The man who made the Spartans what they are. Mendez was recruited by Dr.Halsey to train the Spartan-IIs, and became a legend among them. He later was called back to train the Spartan-IIIs alongside Kurt-051, and assisted him in doing whatever it took to keep as many Spartans alive as possible. He came to hate himself for ever getting involved in the Spartan program, but still regards it as having been necessary.

The acting commander of the prowler UNSC Dusk in late 2552, Lash was one of the few humans to witness the beginning of the Covenant's Great Schism.

A hospital corpsman with a lighthearted demeanor and a fondness for jokes, Healy is one of the soldiers assigned to help train Harvest's Colonial Militia, and is responsible for providing medical care to anyone injured during training.

A veteran frigate commander, Dmitri Zheng was assigned in 2535 to lead the UNSC Midsummer Night in enforcing the newly-enacted Cole Protocol. 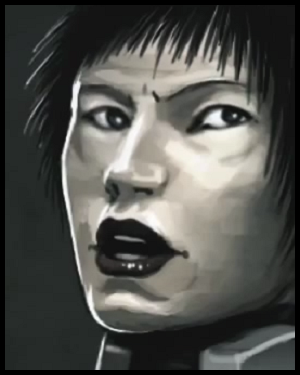 Benti is a medic stationed aboard the UNSC Prowler Red Horse, and often accompanies Sgt.Lopez's Marine squad on missions, including one to the prison ship Mona Lisa. 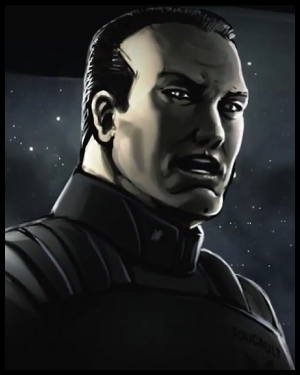 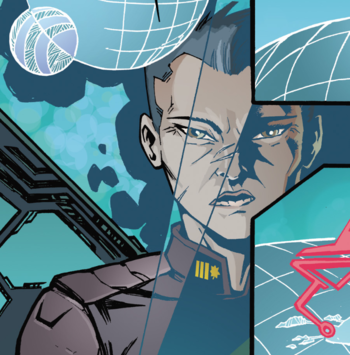 An officer stationed on board the Persian Gate who served as Blue Team's commanding officer during the Battle of Alpha Corvi II.

A Pelican pilot and flight officer in the 23rd Naval Air Squadron who flew Echo-419 during the events of Halo: Combat Evolved, working closely alongside the Master Chief. 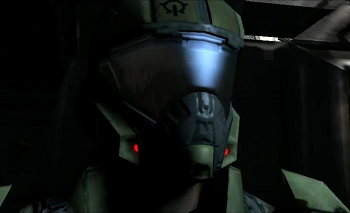 A Pelican pilot who flew Kilo-023 during Halo 3. 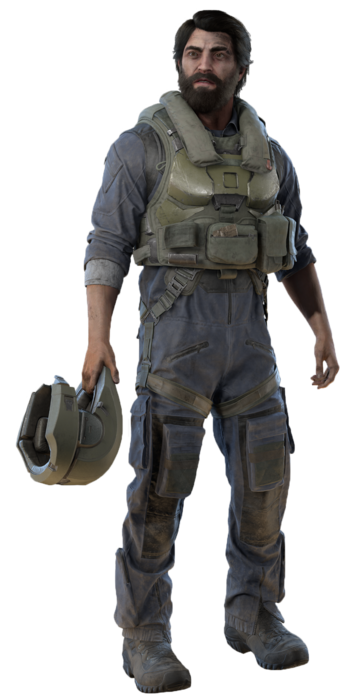 A dropship pilot from the UNSC Infinity who was left stranded aboard his Pelican for nearly 6 months, following a massive UNSC defeat at Installation 07. By sheer luck, he encountered the Master Chief floating through the debris, pulling him out of his armor's stasis system just in time for the Spartan to save him from a Banished patrol... and to rope him into a new mission on the ring.

A Pelican pilot in the 23rd Naval Air Squadron, Polaski was one of the few survivors of Installation 04, joining up with Master Chief during the events of the novel Halo: First Strike.

A member of the Colonial Military, he became fast friends with Gage Yevgenny and Felicia Sanderson. He fell into a coma after suffering brain damage in an Innie bombing in 2524, waking up five years later and learning of the Human-Covenant War and the glassing of his home planet. He became a Pelican pilot and was eventually reunited with Gage and Felicia, and plotted with them and other CMA veterans to steal a vault of gold on New Jerusalem as the Covenant attacked it.