Characters that appears in Dark Gathering 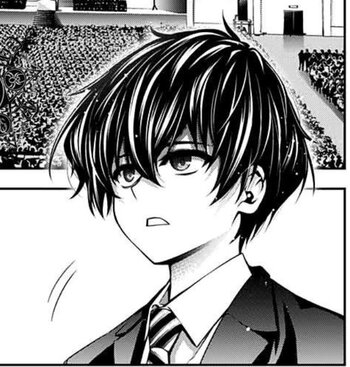 Keitarou Gentouga is a first year college student, born with the ability to sense ghosts, as well as being Supernaturally Delicious and Nutritious. After an incident two years ago, he became cursed to have nerves grow out of his right hand, which he has to regularly get surgically removed to prevent it from hurting him. Due to this incident also causing his Childhood Friend Eiko to be cursed, he shuts himself away in his room, believing he would bring disaster for others. After being convinced by Eiko that he could lead a normal life, he studied hard to enter college along with her. To get back his social skills, Eiko suggests becoming a tutor to gain confidence, not knowing it was a plot to make him work together with Yayoi on her mission.
Advertisement:
Yayoi Houzuki

Yayoi Houzuki is an elementary student who lost her parents in a car accident. Unbeknownst to most, her parents were killed by the demon fetus Kuubou, who took her mother's soul. Swearing on their grave and her father's ghost, she vows to bring her back. She has polycoria, as well as a skull-shaped symbol in her eyes, which allows her to see both physical and spiritual objects. Due to her car accident, she gained an IQ of over 160 and is unnervingly composed in front of things that would traumatize most children.
Eiko Houzuki 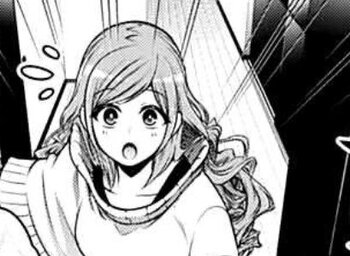 Eiko Houzuki is the cousin of Yayoi and Childhood Friend to Keitarou, being the one responsible for them meeting. Knowing about Yayoi's interest in ghosts(though initially unaware that she captures them) and Keitarou need for readapting to society, she tells Keitarou to be a tutor, then tells Yayoi of his ability so that they can choose Keitarou for the job. Initially she was just the driver for them as she owns a car and license, but later joins them actively on their missions. Had a crush on Keitarou since they were kids. 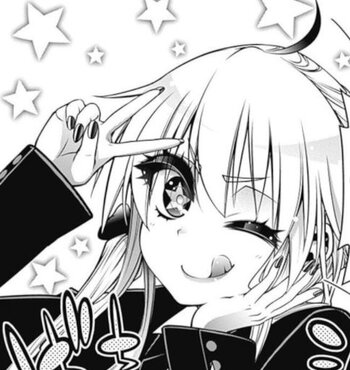 Ai Kamiyo is a new student of Keitarou. She was rejected by her family due to ghosts gathering around her. Ai's brother took her with him to live in Tokyo, not caring about the dangers. However, he dies protecting her from falling steel beams, and his dying words was to beg her not to cry, or he would not be able to die in peace. Due to this, she stays cheerful and optimistic, even if she constantly suffers from bad luck. Believing that her brother is protecting her from other ghosts, she approaches Yayoi to help exorcise them so that he could pass on. However, she is cursed to die when she turns 20, since she is set to be wed to a Kami, who will take her soul, and is the one whom Ai's brother is protecting her from.
Touko Awamiya 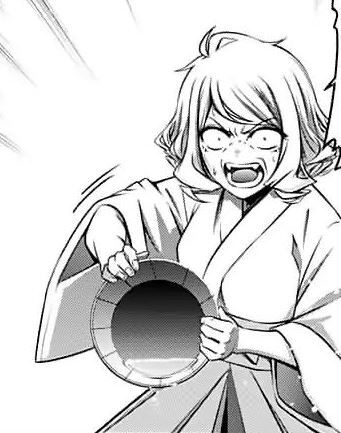 Keitarou's grandmother and head of the Awamiya shrine. She's the one who helped Keitarou as a child to handle his ghost attracting abilities.
Advertisement:
Yuzuki Gentouga 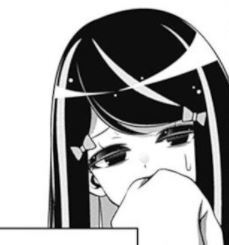 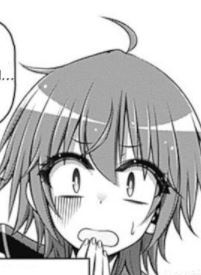 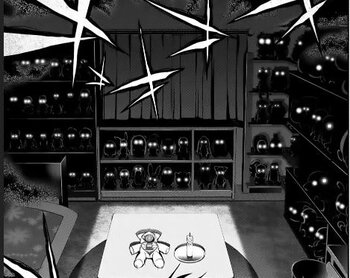 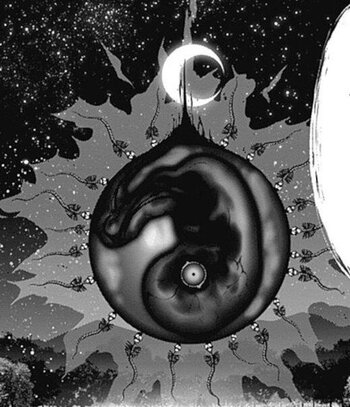 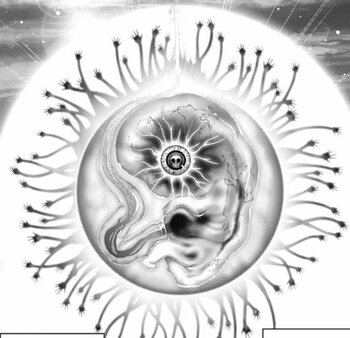 The spirit who took Yayoi's mother. A giant fetus spirit that goes stronger by going around eating powerful spirits. 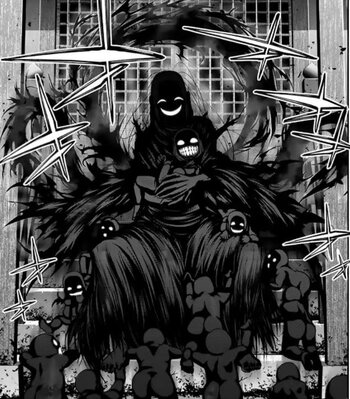 A Bunrei, sprits created by splitting part of the original's soul, of Hariti, a goddess in Buddhism that protects children. She was corrupted by the hundreds of baby spirits that she failed to cleanse.
Ai's older brother 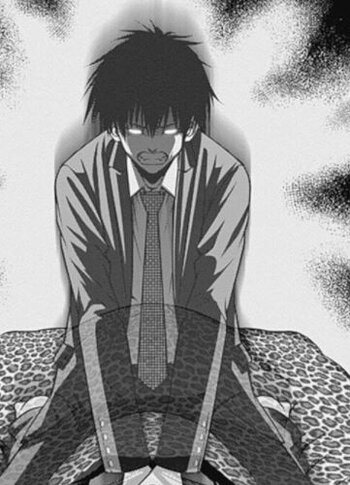 Ai's older brother. After Ai's family made her leave her the house, he brought her to Tokyo to live with him, but was killed when he pushed Ai out of the way of falling steel beams.
The unnamed Kami 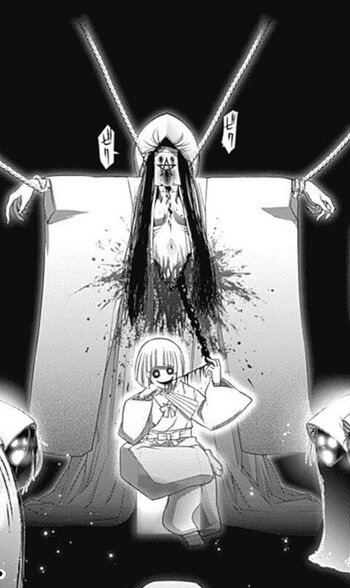 A Kami with the appearance of a child. He has chosen Ai as his bride and is set to take her soul when she turns 20. An evil god who enjoys facing challenging enemies, which was why he allowed Yayoi and co to live despite being able to kill them, so that they could build up their forces to face him.
Old lady ghost

An old lady ghost that was found in the H castle ruins. Leads unsuspecting victims to the waterfall while telling them about the history of the mass suicide that happened there. Was originally thought to be one of the Bunrei created by the spirit of H castle ruins, but was actually planted there by the one who placed a cursed arm to keep watch on it.
Spirits of the abandoned love hotel 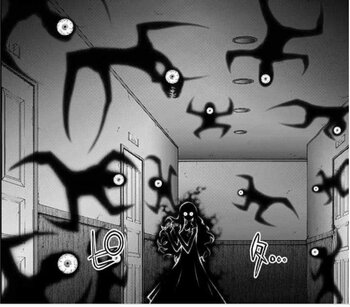 The ghosts of dozens of innocent women kidnapped by Yakuza and trapped in a love hotel to be raped. They died either from drug overdose or from being beaten to death. Each of them were killed in different rooms, but their fear and desire to escape merged together to create an originally non-existent room which their ghosts try to escape from. This room is normally inaccessible, but since all the female ghosts are trying to avoid it, by changing the number tags of the rooms around them, they will go towards the room while believing they were moving away from it.
Oswald

A foreign exorcist that had his body taken over by a ghost.
Nagiko Shami 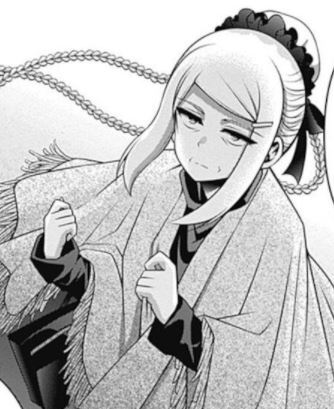 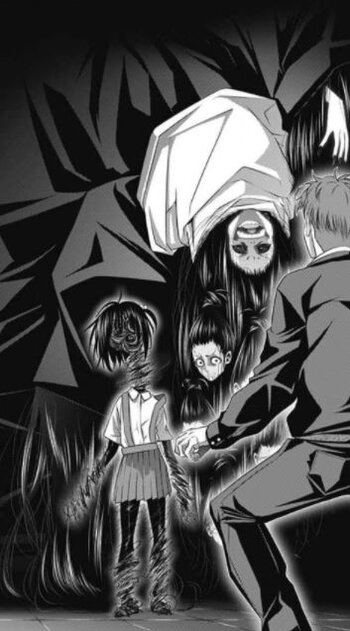 A spiritualist that hosted a ghost show that eventually had her body taken by another ghost. Said ghost was haunting the old K tunnel, based on the real life old Komine tunnel.

Tropes applying to the ghost