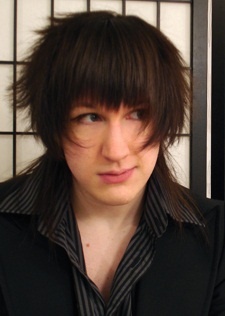 Don't let the hair fool you, this person is a guy.
Advertisement:

Clint Bickham (born October 5, 1981) is a voice actor and ADR script writer for Funimationnote A lot of his work with Funimation is mostly limited to his script writing, though he'll very occasionally get cast in roles and Sentai Filmworks. Due to his naturally high-pitched voice, he is often typecast as young boys or baby-faced young men. In fact, his voice is so high-pitched that he sounds feminine at times (something that he lampshaded himself in Facebook). Basically, at some of his pitches you could probably tell someone that the voice belonged to a woman who specializes in voicing young boys and they wouldn't bat an eye.

He is also the writer of Devil's Candy, working alongside illustrator Priscilla "Rem" Hamby.