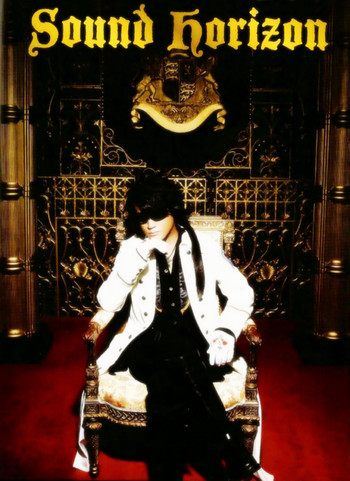 Revo, the leader of the band—um, Kingdom of Sound Horizon, sitting in all his majestic glory. note Not pictured: his pet winged lion.

Sound Horizon is a Japanese band consisting of songwriter Revo and some other people (who tend to vary from one album to the next). Their albums are nearly all Concept Albums, if not Rock Operas, usually with fantasy or science fiction themes. The creator of the band has also done an image album for Gunslinger Girl (translations of which can be found here

), an Image Album for the Leviathan manga, a theme song

for Atelier Iris 3, the soundtrack for Bravely Default, and the opening song for the anime adaptation of Attack on Titan (the latter two under the new project known as Linked Horizon). They are known for their play-like live performances, and lots of foreign languages.

They have quite a following in Asia (including South Korea and Taiwan), and numerous fan-made music videos have been made to their songs.

As of this writing (2016), almost all of the band's major albums note sans albums from the doujin era and singles, with the exception of Ido e Itaru Mori e Itaru Ido, the plotline of which is integrated into Märchen, and Vanishing Starlight have been adapted into manga form by various artists such as Yukimaru Katsura, Sakura Kinoshita (of Mythical Detective Loki Ragnarok fame), and Arisaka Ako. Elysion and Roman have also been adapted into novels penned by Ao Juumonji on February 2014 and February 2016, respectively.

In the world of revolving horizons, the following <terminologies of story-telling> [examples] are used:

open/close all folders
The Band in General