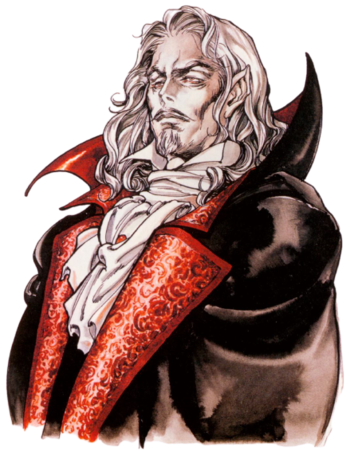 Remember to always look your best when dealing with miserable little piles of secrets.
"Please allow me to introduce myself, I'm a man of wealth and taste."
— The Rolling Stones, "Sympathy for the Devil"
Advertisement:

Turns out, evil has quite a lot of money and excellent fashion sense. The villain might well brag about the kickass English or Italian suit he had tailored, possibly during a Mob-Boss Suit Fitting. It's very common for the Corrupt Corporate Executive.

When your evil mook uniforms are made by Hugo Boss, this is Putting on the Reich.

Sub-Trope of Evil Is Cool and Sharp-Dressed Man, and Sister Trope to Badass in a Nice Suit. Supertrope to Villain in a White Suit.

See also Wicked Cultured, and A Glass of Chianti. The polar opposite of Wild Man — a hero with no resources, no fashion, but a very good heart. The other polar opposite is Fashion-Victim Villain. Oh, and his (normally) Good Counterpart? That's a Sharp-Dressed Man. Also a common trait of Louis Cypher.