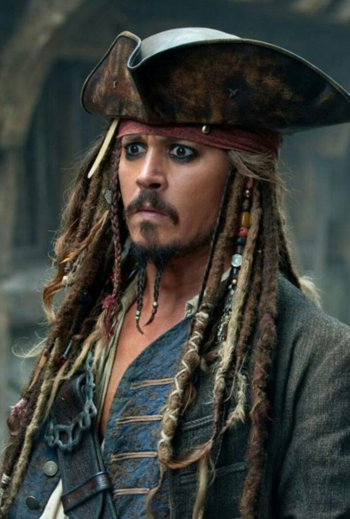 The main character of the series, and the only one aside from Hector Barbossa and Gibbs to appear in all five movies. Loves freedom, rum, his hat, and the Black Pearl. See here for tropes relating to him. 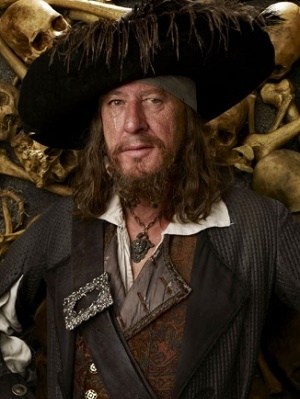 "You best start believing in ghost stories, Miss Turner... you're in one!"
Click here to see him under the Aztec gold's curse 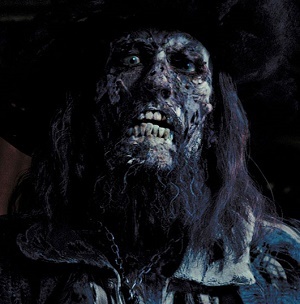 Played by: Geoffrey Rush
Voiced by: Jesse Conde (Latin American Spanish)
Appears in: The Curse of the Black Pearl | Dead Man's Chest | At World's End | On Stranger Tides | Dead Men Tell No Tales
"There's never a guarantee of comin' back. But passin' on, that's dead certain."

The villain of the first film, he controls the undead crew of the Black Pearl who Rape, Pillage, and Burn every city they ran on while trying to collect every single piece of the magical Aztec Gold that cursed them when they stole it and spent it on booze, games and hooke... oh, sorry, pleasurable company. He's the very picture of a Magnificent Bastard and, as it pits him against the protagonists, he bites the big one. But fate has more in store for Barbossa, and he makes an uncredited cameo in Dead Man's Chest, resurrected for the third film by Tia Dalma when the heroes (and other forces) need him and Jack to return. He's ambitious and big on the double-cross, willing to take out anyone who stands in his way, but really, he's just trying to take control of his life back. By the third movie, he's graduated to something of a weird uncle to Elizabeth especially, despite his originally having kidnapped her and threatened her life, and a particular respect develops between them (to the point of Elizabeth asking him to perform her and Will's marriage ceremony, albeit in a hurry). Barbossa remains arrogant, though, and is always convinced — and manages to convince others — that his straightforward plans are foolproof. He then proceeds to shoot himself in the foot, along with the feet of anyone foolish enough to follow him. Takes over Blackbeard's ship and crew at the end of the fourth movie, and gains his powers. 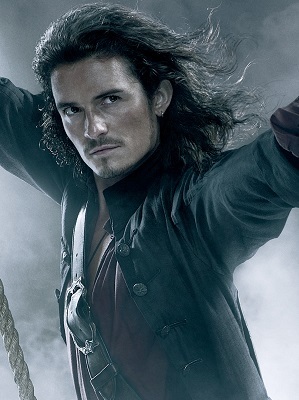 Played By: Orlando Bloom
Appears in: The Curse of the Black Pearl | Dead Man's Chest | At World's End | Dead Men Tell No Tales
Jack Sparrow: One question about your business, boy, or there's no use going. This girl... how far are you willing to go to save her?
Will Turner: I'd die for her.
Jack Sparrow: Oh good. No worries then.

A blacksmith from Port Royal, who loves Elizabeth Swann, the governor's daughter. He was found shipwrecked and (presumably) orphaned roughly ten years before the first movie takes place. Excellent swordsman, but a little too naive when it comes to dealing with pirates, before he takes some levels and understands how the world really rolls in those circles. Proceeds to continue his badass training and power-leveling in the course of second and third movies and eventually becomes the captain of the legendary Flying Dutchman. 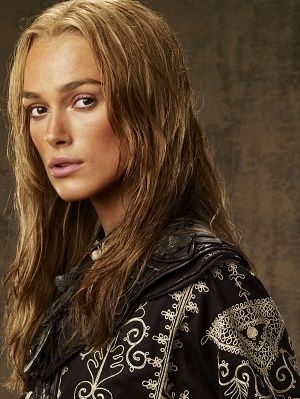 Played by: Keira Knightley
Appears in: The Curse of the Black Pearl | Dead Man's Chest | At World's End | Dead Men Tell No Tales
"I've had it! I've had it with wobbly-legged, rum-soaked PIRATES!"

Governor Swann's daughter, essentially a modern girl trapped in an eighteenth-century world, and keeper of the MacGuffin in the first film. Somewhere between The Heroine, the Action Girl and The Heart, she's the access character who — like the audience — grew up with heavily romanticized pirate stories. She's kind of a fan girl when if comes to pirates, but is a brilliant strategist when given the chance, and takes a level in badass between the first and second movies. Elizabeth is the center of a Love Triangle (or rather a Love Trapezoid) that contains Will, Jack and Norrington all trying to get with her. 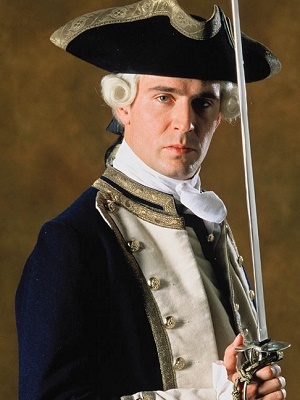 Click here to see him after his fall from grace. 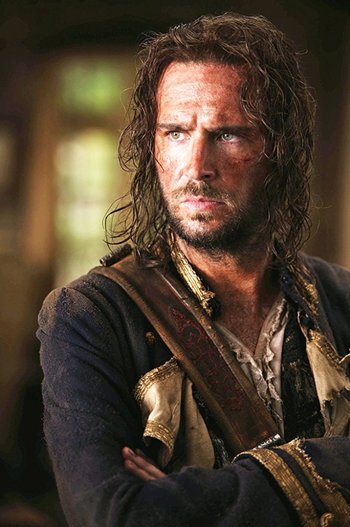 Played By: Jack Davenport
->Dubbed By: Jean-Pierre Michaël (European French)
Appears in: The Curse of the Black Pearl | Dead Man's Chest | At World's End
"Vile and dissolute creatures, the lot of them. I intend to see that any man who sails under a pirate flag or wears a pirate brand gets what he deserves: a short drop and a sudden stop."

A young, dedicated naval officer and pirate hunter, James Norrington first appears as a teenage lieutenant escorting the Swann family on their crossing from England, and many years later, after his promotion to commodore, he proposes to Elizabeth after seeing She Is All Grown Up. Elizabeth's heart, however, belongs to Will Turner, and even Norrington comes to know it- when Elizabeth asks him to save Will for her sake, it sows the first seeds of doubt in her sincerity, and he ultimately settles for being a Romantic Runner-Up and wishes Will and Elizabeth the best in their relationship. By the end of the first movie he considers Jack his Worthy Opponent, and gives him a day's Mercy Lead. His act of generosity couldn't have impressed the higher authority- letting an enemy go free was, at the time, a death sentence for a naval officer. This probably explains why he becomes so desperate to catch Sparrow that he pursues him into a hurricane, and his ship goes down with almost all hands. He resigns from the Navy in disgrace and flees before he can be court-martialed and ends up with a serious case of Heroic BSoD, dropping from noble officer to borderline Anti-Hero who is desperately looking for an opportunity to get his old job back and turning up again in the pirate stronghold of Tortuga as a filthy, drunken, unshaven mess. After Elizabeth prevents him from drunkenly attempting to kill Jack and fight off an entire tavern's worth of pirates, he ends up a deckhand on Jack's crew. When the party finds the key item of the sequels, the heart of Davy Jones, whose owner controls the seas, James — seeing it as a free ticket back to his old, honorable life — steals it and brings it to the new Big Bad Lord Cutler Beckett as a token. He is given the new, higher rank of Admiral in the EITC's private armada and seems to have gotten his former status back, but it quickly becomes apparent that he, Jones and Elizabeth's father Weatherby Swann have become pawns in Beckett's game. He tries to use his position to subtly protect Governor Swann and look out for Elizabeth, and after learning Beckett had Swann murdered (and seeing the utter hatred Elizabeth feels for him after believing he was a part of it), he saves Elizabeth and her crew from Beckett's clutches, losing his life in the process. 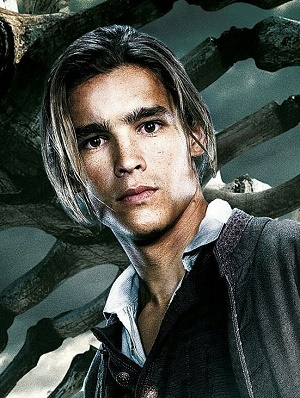 Played by: Brenton Thwaites; Lewis McGowan (12 years old); Dominic Scott Kay (9 years old)
Appears in: At World's End | Dead Men Tell No Tales
"I've read about a treasure, a treasure that holds all the power of the sea. The Trident of Poseidon can break your curse!"

The son of Will and Elizabeth Turner, determined since his childhood to end his father's tenure aboard the Flying Dutchman and return him home. He's spent his life sailing and learning the myths and lore of the sea, but his blind acceptance of the tales has put him at odds with the Royal Navy more than once, especially as he's always planned on allying with Jack Sparrow to achieve his goal. 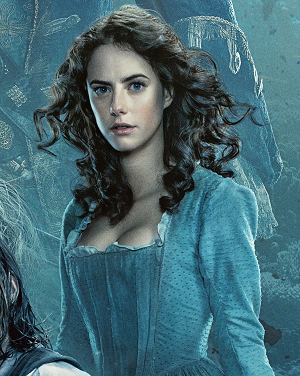 A young woman fascinated by math and science who obtains a diary full of clues about the Trident of Poseidon. 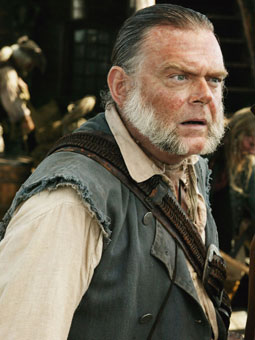 Played by: Kevin R. McNally
Voiced by: Jacques Frantz (French), Humberto Vélez (Latin American Spanish)
Appears in: The Curse of the Black Pearl | Dead Man's Chest | At World's End | On Stranger Tides | Dead Men Tell No Tales
Jack Sparrow: I thought you were supposed to keep to the code.
Mr. Gibbs: We figured they were more actual guidelines.

The longtime comrade and devoted first mate of Captain Jack Sparrow. Teller of tales, handy with a bottle, this veteran sea salt was truly a skillful sailor who cleverly navigated his way through many deadly situations. The often-soused but always reliable Gibbs had an encyclopedic knowledge in all manner of pirate lore of the seven seas and an epicurean taste for rum.

Once a sailor in His Majesty's Royal Navy, later an enthusiastic pirate, Joshamee Gibbs was a man who knew his way across every ocean, and into every pub. Gibbs was Jack Sparrow's most trusted comrade, one who cared as much about the Black Pearl as Jack himself did. On several occasions, Gibbs served under Jack's nemesis and rival, Hector Barbossa, but was never truly loyal to him compared to his true loyalty to Jack. Gibbs had an endless capacity to forgive, necessary when he sailed with Jack Sparrow, but lived a pirate's life and followed the Pirate's Code.