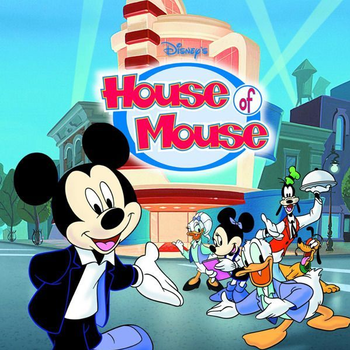 "Now I wanna remind everyone of the House of Mouse rules: No smoking, no villainous schemes, and no guests eating other guests."
— Mickey Mouse
Advertisement:

In 1999, the stars of the Classic Disney Shorts returned to starring in regular cartoon shorts. But rather than being made to play right before selected movies in theaters (although a few of them actually did premiere there anyway beforehand), these new cartoons were going to be shown alongside other Disney cartoons like Recess and Pepper Ann. Mickey Mouse (starring in his first cartoon series produced by Disney Television Animation) and the gang's new show, titled Mickey Mouse Works, made its debut on ABC's One Saturday Morning programming block on May 1, 1999. It followed a Three Shorts format, with each five-minute short starring one of Mickey's gang, and even mixing characters who rarely, if ever, interacted in the older cartoons (i.e. Mickey taking care of Donald Duck's nephews or Mickey trying to impress Minnie Mouse when he thinks she's leaving him for José Carioca). Sometimes, the characters starred in newly-made installments of the Silly Symphonies, in which the stories were set entirely to music and without dialogue. Once per Episode, there would also be one or two 90-second gag shorts with the following umbrella titles:

Reception to Mickey Mouse Works was generally mixed among the fans of the characters. There were folks who believed the show was indeed a worthy Spiritual Successor to the theatrical shorts it was based on, but there were others who complained that maybe Mickey and friends' new adventures were trying too hard to be like the competition, and that the good things that came up were just rehashed from the original shorts. It is generally agreed, though, that the series' finest episode was the double-length short "Mickey Foils the Phantom Blot", a loose adaptation of a Floyd Gottfredson storyline from the Mickey Mouse comic strip.

Regardless of what everyone thought of Mouse Works, it received a major Retooling in the middle of its third season (right around the time One Saturday Morning itself received a retool). On January 13, 2001, Mickey Mouse Works was replaced with a new series titled Disney's House of Mouse, and this time, the cartoon shorts were being presented with a framing device.

The concept of House of Mouse was that Mickey and his friends were now running an eponymous nightclub, whose entertainment consisted of special musical guests and showing the cartoon shorts produced for Mouse Works (some of which had not aired previously), and occasionally classic Disney shorts from the Golden Age of Animation to an audience of Disney characters. The guests consisted almost entirely of characters from all of the Disney Animated Canon films up to 2001's Atlantis: The Lost Empire,note But none of the Pixar films, for obvious reasons, though Donald did dress in costumes relating to them in one episode. Also, while Lilo & Stitch, which is known for its crossovers, didn't appear since that film wasn't released at the time of production, the titular duo did appear in a Flash game. and sometimes characters from the Silly Symphonies shorts (mostly "The Three Little Pigs", though). The series did feature cameo appearances by characters from other Disney TV cartoons (Pepper Ann and her mom are seen outside the House in the first episode), the comic books (Scrooge McDuck bought the House in one episode), theme park attractions (the Hitchhiking Ghosts, also in the first episode), and even live-action movies (Herbie from The Love Bug, Benny the Cab from Who Framed Roger Rabbit and the lightcycles from TRON in "Max's New Car", which also featured Susie the Little Blue Coupe), but these were few and far between. Curiously, unlike the later Lilo & Stitch: The Series, House of Mouse also did not do any Crossovers with other currently-running Disney cartoons like Buzz Lightyear of Star Command (although Donald wears a Buzz Lightyear outfit in one episode, resembling the design of his suit from the show) and Lloyd in Space, aside from the aforementioned Pepper Ann cameo.

52 episodes of House of Mouse were produced, but only half of them were aired on One Saturday Morning before it was replaced with ABC Kids in September 2002. As a result, House of Mouse was taken off of ABC and moved to the Disney Channel and Toon Disney, where the remaining 26 episodes aired alongside the previously aired ones as well. During the show's run, a few Mouse Works shorts were packaged with some of the classic shorts onto video compilations, but had their title cards cut out and replaced with newly-made framing animation, and were advertised as two direct-to-video movies - Mickey's Magical Christmas: Snowed in at the House of Mouse and Mickey's House of Villains.

open/close all folders
House segments
Mouse Works shorts
Goofy: But you get to wear my clothes!
(Donald realizes that he's suddenly wearing Goofy's clothes)
Donald: Huh?!
Goofy: And you get to look just like me!
(Donald runs over to the mirror, then proceeds to turn into Goofy himself)
Goofy!Donald: A-hyuck? (covers his mouth)
Goofy: Now YOU'RE Goofy too!
Feedback