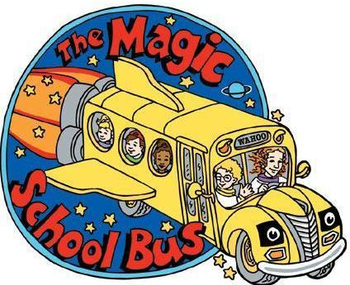 Ms. Frizzle: Seatbelts, everyone!
Arnold: Please let this be a normal field trip...
Wanda: With the Frizz?
Entire class (except Arnold): NO WAY!
Arnold: Awwww...
— The intro to every single episode
Advertisement:

An animated Edutainment Show which ran on PBS from September 10, 1994 to December 6, 1997, with reruns airing until September 25, 1998. It was adapted from a series of books written by Joanna Cole and illustrated by Bruce Degen, which ran from 1986 to 2010, with a new book about human evolution released in June 2021. The show was a co-production between Nelvana and Scholastic, with South Carolina ETV serving as the show's presenting station. It was later made into a set of computer games, as well. The series follows an eccentric schoolteacher as she takes her elementary school class on very exotic field trips which teach scientific topics. These adventures are made possible by (you guessed it) a magical shapeshifting school bus. (And Viewers Like You, of course.) The show's Wacky Homeroom consisted of:

Original production funding was provided by the National Science Foundation and Microsoft Home (credited simply as Microsoft on most episodes of Season 3); additional funding was provided by U.S. Department of Energy and Carnegie Corporation of New York. Additional funding for most episodes of Season 2 (and all of Season 3) was also provided by the Corporation for Public Broadcasting and PBS. Season 4's sponsors were the National Science Foundation, Carnegie Corporation of New York, and PBS. All of this was in addition to generous donations from Viewers Like You.

TROPE EXAMPLES IN THE NEIGHBORHOOD?