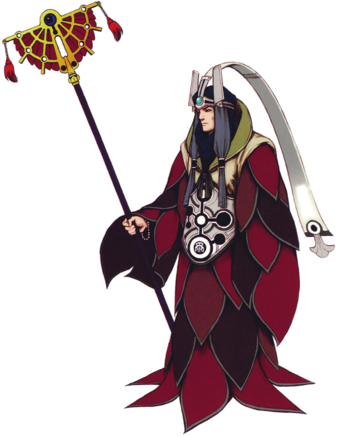 Yuna's father and the previous summoner who defeated Sin ten years prior.

In X-2, the disembodied voice of Braska lends moral support for the last boss battle, along with his stalwart friends.

An arrogant summoner who Yuna meets in Kilika. She lacks the conviction to destroy Sin, and Tidus has the option of talking her out of her pilgrimage aboard the Fahrenheit.

In X-2, The Gullwings can help patch things up between her and Barthello. 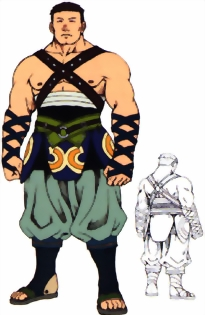 Another summoner whom Yuna encounters on her journey, this time in Djose. He has two guardians, his younger brothers Maroda (the middle brother) and Pacce (the youngest brother). All three of them are swept up in the Al Bhed dragnet.

In X-2, Isaaru is running a cheesy attraction out of the now-vacated ruins of Zanarkand. Isaaru also seems to be having a spat with his brother Maroda, who has joined the Youth League. 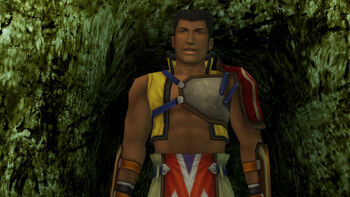 The middle brother of Isaaru and also his guardian. He doesn't participate in the prosecution of Yuna, and refuses to believe the news of her being a traitor.

The youngest brother of Isaaru who likes to think of himself as a guardian. (His older brothers decide to humor him.) In X-2, he becomes leader of the "Kindergardians", a wannabe sphere hunter group. 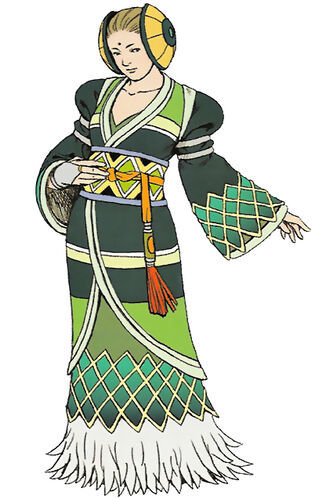 "Let us see which are stronger. My Aeons or yours. A one-on-one match. Not to the death, of course. What do you say?"
Voiced by: Kayako Fujii (Japanese), Cree Summer (English)

A mysterious summoner whom Yuna meets on the Mi'hen Highroad. Much more experienced than Yuna, Belgemine offers to test her preparedness to take on Sin; she makes several later appearances to train up your Aeons. She actually resides in Remiem Temple, an inaccessible temple in the Calm Lands. When Yuna completes her training there, Belgemine reveals that she's an Unsent, having died during her battle against Sin. Now she trains summoners, trying to ensure that no one else suffers her fate. As a reward, Yuna acquires the Magus Sisters as Aeons. 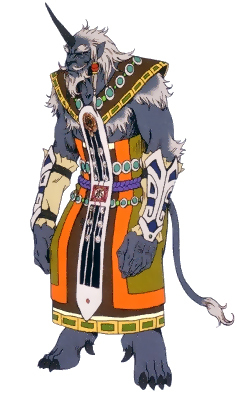 One of the four Maesters of Yevon, he is also the leader of the venerable Ronso. 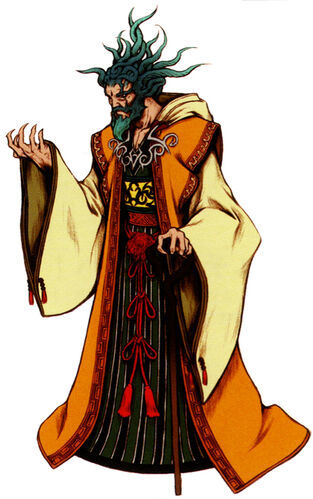 Former Maester of Yevon and leader of the Guado. He is Seymour's father, and was married to a human woman; the Guado cast both her and the young Seymour out due to the outcry. When Seymour returned from exile, Seymour used his fame and rank to reenter Guado society. Shortly before the game begins, he murders Jyscal as punishment for abandoning him and his mother. When the group visits the Farplane, Jyscal desperately attempts to get the attention of Yuna and manages to pass her a sphere recorded in his dying moments where he talks about Seymour's intentions.

For some reason, Jyscal is trapped in the Vio Infinito in X-2, despite last being seen in Guadosalam. He transforms into the Black Elemental, the strongest fiend in the Elemental family.

The Al Bhed are a tribe who lost their Home at the hands of Sin long time ago and the remaining survivors spread all over Spira, until one day, an Al Bhed named Cid reunited them again building a new Home at the Sanubian Desert in Bikanel Island. They are considered enemies of Yevon due to their use and search of forbidden Machina, which was said to be the cause of the birth of Sin. Also, the Al Bhed have their own language and their own Blitzball team, the Al Bhed Psyches.

Airship captain and leader of the Al Bhed, who finally reunited his tribe after Sin destroyed their original Home. He is the father of Rikku and Brother, and also the maternal uncle of summoner Yuna, as Yuna's mother was his estranged sister when she married Braska.

In the "Last Mission" of X-2, Rikku mentions that her father continues to hatch zany schemes to fund the reconstruction of Home. 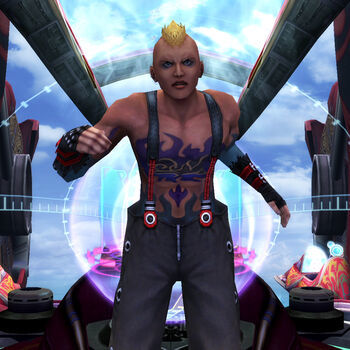 "Who is the leader? I am! I give the orders around here!!"
Voiced by: Takayuki Yamaguchi (Japanese), David Rasner (English)

An eccentric character who is Rikku's older brother. If he has a real name, it's never mentioned.

He plays a larger role in X-2: He and Buddy managed to unearth the Celcius from the arctic, and Brother became Captain of the the Gullwings.

"May I help you?"
Voiced by: Shunsuke Sakuya (Japanese), Tom Kenny (English)

An Al Bhed entrepreneur who owns a successful chain of Travel Agencies, as inns are referred to in this universe.

In X-2, he enlists the Gullwings to figure out who (or what) reprogrammed his line of synchronized machina to attack passersby.

General tropes
The Ronso are a race of humanoid man-beasts that have their home on Mt. Gagazet. The Ronso are a small but proud race of warriors and have bred some of the mightiest combatants in Spiran history. They are also long-time followers of Yevon, as Mt. Gagazet is on the outskirts of Zanarkand, the destination of all summoners on their pilgrimage.
Biran & Yenke 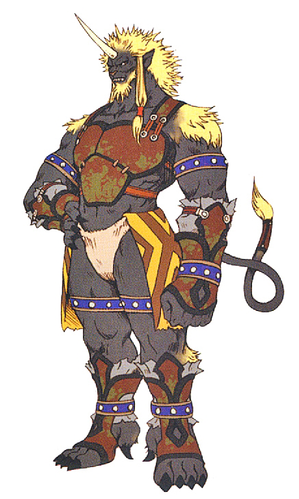 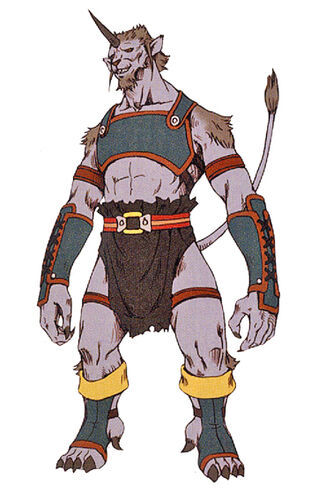 A pair of powerful Ronso warriors who Kimahri has known since he was young. As a young man overly eager to prove himself, Kimahri would challenge them, especially Biran, the great hero of the Ronso. Biran always defeated Kimahri, who would refuse to accept defeat and simply challenge Biran again, until one day an enraged Biran broke Kimahri's horn. Disgraced, Kimahri went into exile soon after.

When encountered during the pilgrimage, the two mock Kimahri about the past, but also deliver a warning about disappearing Summoners. When the group must climb Mt. Gagazet, Biran and Yenke challenge Kimahri before allowing him to pass and climb the mountain. After being defeated, and seeing that Kimahri has become both a great and dignified warrior, Biran acknowledges Kimahri's strength and praises the person Kimahri has become. Biran and Yenke die along with their leader Kelk at the hands of Seymour Guado as part of the effort to prevent Seymour from climbing Mt. Gagazet.

General Tropes
The Guado are a race of humanoids that live in Guadosalam, a city built by the entrance to the Farplane. They only came into Yevon's folds recently under the leadership of Jyscal Guado, who was made a Maester of Yevon for his conversion of the people. Physically they are differentiated from normal humans by their long limbs including fingers.
Tromell Guado 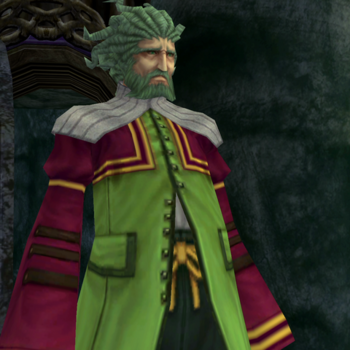 Seymour's butler and right hand man. He seems old and speaks in a panicky, stretched tone. He turns on the party pretty quickly after they kill his master in Macalania Temple.

In X-2, he is the de facto leader of the Guado after Seymour's demise. He is resigned to going to war with the Ronso and dying, but seems genuinely repentant for what the Guado have done. The Gullwings have a opportunity to broker peace between the Guado and Ronso, and Tromell is officially elected as their new leader.

"And that, as they say, is that."
Voiced by: Takuma Suzuki (Japanese), Dwight Schultz (English)

An old scholar who has an astounding amount of knowledge of Spira and its history. He first appears at Mi'ihen Highroad walking near a statue of Lord Mi'ihen, and follows the guardians throughout the game.

In X-2, Maechen shows up again to provide more exposition and plot twists, as well as dropping hints that Tidus could be revived somehow.

Or O'aka The XXIII, Merchant Extraordinaire. He is an Intrepid Merchant with a cockney accent who hounds Yuna's party, trying to interest them in weapons and items.

"No one has been able to defeat [Sin] it."
Voiced by: Ryuzo Ishino (Japanese), John DeMita (English)

A recruiter for the Crusaders in Besaid, whose mere presence on the island drives Wakka up the wall. He participates in the doomed Operation Mi'ihen alongside his newest recruit Gatta. He was also the one who persuaded Chappu, Wakka's late younger brother, to join the Crusaders. Wakka settles his accounts with Luzzu on the eve of Operation Mi'hen. Depending on your choice when talking to Gatta about following orders, either he or Luzzu will perish.

A young Crusader recruit from the Isle of Besaid following the orders of his superior Luzzu who participated in the failed Operation Mi'ihen. Luzzu told him to remain at headquarters but, depending on your dialog choice, he may or may not leave his post.

Captain of the Chocobo Knights during Operation Mi'ihen. After the battle, she, along with Elma and Clasko, travel to the Calm Lands to catch new chocobos and reform the Knights after the heavy losses they sustain. (There's only three of them now.) She will accompany the guardians up until the Moonflow, which her chocobo cannot cross.

Lucil, along with her knights, are among those who decided to side with the Youth League in X-2. Lucil is promoted to Nooj's second-in-command. Naturally, she is none-too-pleased if the Gullwings align themselves with New Yevon. Lucil is fought as a friendly wager in the battle tournament, and can be recruited in the Creature Creator.

Second in command of the Chocobo Knights and Heterosexual Life-Partner to Lucil. She's a little more free-wheeling than her soft-spoken boss. Like Lucil, she has little patience for Clasko's bumbling. She can also be fought and recruited in the Creature Creator.

The third member of the surviving Chocobo Knights who is often left in their dust. He is a total failure at everything he puts his hand to—apart from taming chocobos.

Clasko joins his old comrades in the Youth League, but fares little better there.

A Yevon nun with no trace of evil. She agrees to help Tidus spread the word to sing the "Hymn of the Fayth" and calm Sin.

In X-2, Shelinda has quit the church after being discouraged with the direction of New Yevon. 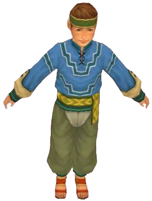 A mysterious young man who is seen stalking Yuna in the Liki Ferry to Kilika. Later, he is revealed to be O'aka XIII's younger brother when O'aka is imprisoned for supporting Yuna and becomes his substitute. O'aka retires after his release and gives the business to him. He was also a former guardian along with O'aka to his late sister.

The Aeons in general
The collective term for the powerful summoned creatures in the world of Spira. In a summoner's pilgrimage to destroy Sin, he or she must travel across Spira, and pray to the temples that house the Fayth of these Aeons until the Aeon granted them its power. Once all temples have been visited, the final goal of the summoner is to head for Zanarkand, where they will attempt to obtain the Final Aeon, the only one with power to defeat Sin.
Valefor 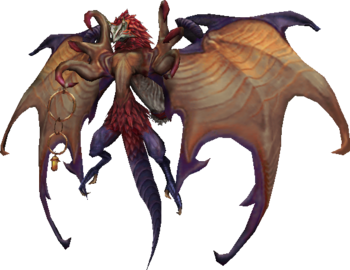 Resting in Besaid Temple, Valefor is the first Aeon Yuna obtains on her journey. 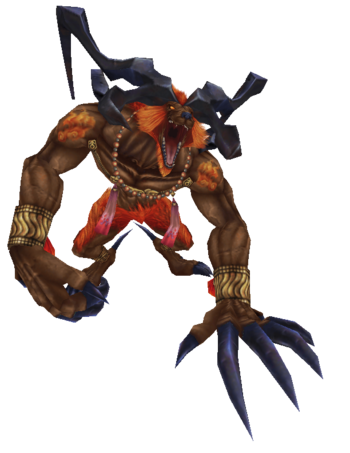 One of the returning summons from older Final Fantasy games, Ifrit is the Aeon of Fire in Kilika Temple. 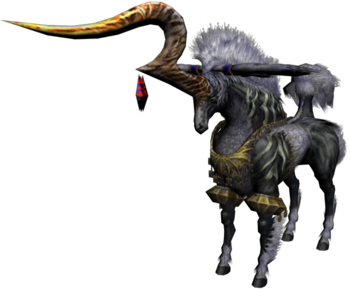 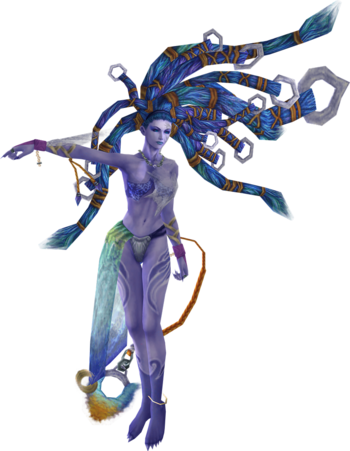 Another Final Fantasy staple, this Aeon of Ice is found in Macalania Temple. 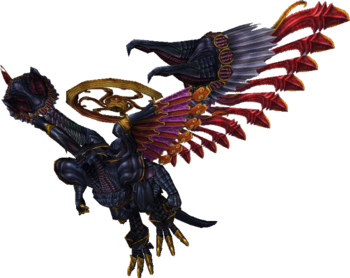 The strongest of the mandatory summons, Bahamut is the Aeon that is housed in the temple of Spira's capital, Bevelle. Its Fayth is the young boy that keeps appearing to Tidus as a guide on several parts of his journey, and acts as the leader and messenger for the rest of the Fayth. 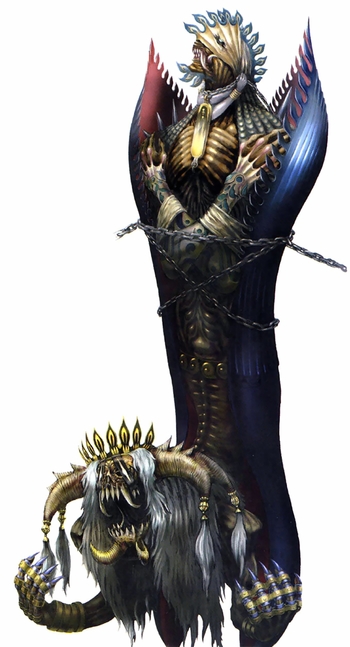 One of the secret Aeons, Anima's home is Baaj Temple, which was thought to be lost and catastrophically flooded by the sea. Before becoming a Fayth, Anima was Maester Seymour's late mother. 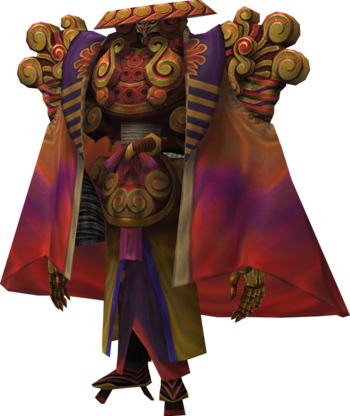 Another secret Aeon, the statue containing its Fayth was stolen long ago and taken to a cave at the border of the Calm Lands and Mt. Gagazet. 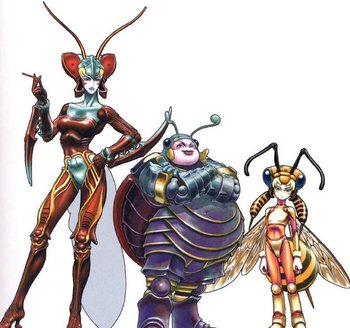 The last of the secret Aeons, the Magus Sisters are unique in that they are technically three Aeons in one. They can be found in Remiem Temple, an abandoned temple at the edge of the Calm Lands that can only be reached while riding a chocobo. Their names are Cindy, Sandy, and Mindy.