Beware. Spoilers unmarked from all games. 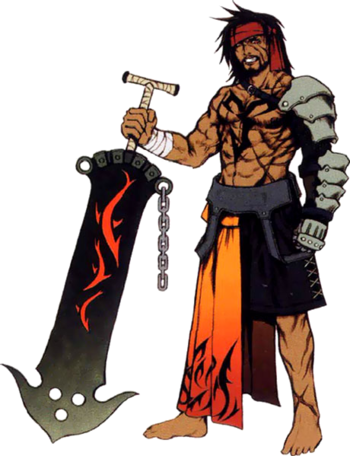 "There's a time when you have to stop crying and move on. You'll be fine. Remember, you're my son."
"I ain't gettin' any younger, so I might as well make myself useful."
Voiced by: Masuo Amada (Japanese), Gregg Berger (English)

Tidus' father, a Blitzball champ and alcoholic who was never satisfied with his son. He went missing while out practicing when Tidus was young and became a sort of martyr in Zanarkand.

His voice can be heard during the final boss melee in X-2: His spirit lives on in the Farplane alongside his comrades, Auron and Braska.

He is the main villain representing Final Fantasy X in Dissidia, though unlike the other "Warriors of Darkness", his motives are still altruistic. 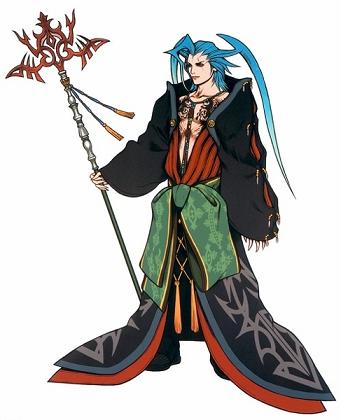 "Death is a sweet slumber. All the pain of life is gently swept away...Ah, yes. Don't you see...if all life were to end in Spira, all suffering would end. Don't you see? Do you not agree?"
Voiced by: Junichi Suwabe (Japanese), Alex Fernandez (English)

The son of the late Maester Jyscal, who represented the Guado in Yevon's hierarchy. He briefly joins the guardians in a boss battle at Mushroom Rock. Like Yuna, he is a summoner who wields a staff; however, he doesn't use Aeons in this battle, and he has knowledge of black magic along with white.

Seymour is briefly shown again in a recording in X-2, which took place in his manor shortly before the guardians arrived. Humorously, his house has been commandeered by the LeBlanc Syndicate. He can also be fought and recruited in the Creature Creature, making him the fifth returning playable character from X. Seymour is a versatile Red Mage who absorbs all elemental attacks besides Holy. As he can spam magic for free (via Spellspring), it's no use trying to deplete his mana pool.

The spiritual leader of Spira and the Grand Maester of Yevon for the last 50 years.

In X-2, he is encountered as a boss in the Bonus Dungeon Vio Infinito. He becomes the Concherer, a vile-looking fiend.

The human representative of Yevon and leader of their Warrior Monks.

His restless spirit is found wandering the Vio Infinito, transforming into the Giant Enemy Crab Aranea. 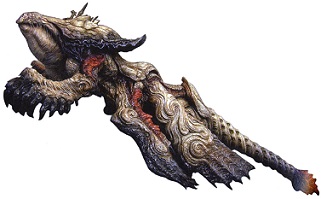 A Space Whale which is the primary antagonist of FFX. Like Yu Yevon himself, it is a Gravity-based opponent.

The various Fiends that Sin creates. Usually large and powerful creatures in their own right, there is also the smaller, easy-to-kill variant, Sinscales.
Yunalesca 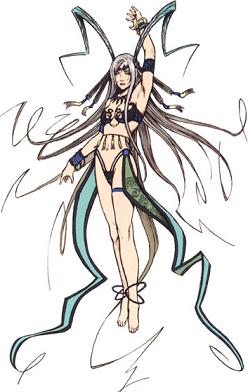 "It is better to die in hope than to live in despair. Let me be your liberator!"
Voiced by: Yoko Koyanagi (Japanese), Julia Fletcher (English)

Yu Yevon's daughter and the first summoner to "defeat" Sin. Yuna was named after her. She has been dwelling in Zanarkand as an Unsent for a thousand years, acting as the guide to the summoners who complete their pilgrimage.

In X-2, Yunalesca can be found shambling along the halls of the Vio Infinito alongside other unsent, including Maester Jyscal, Kinoc, and Mika. 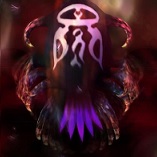 The namesake of Yevon and father of Yunalesca. He was a zealous religious leader in Zanarkand. Yu Yevon gave Sin a simple task: to eliminate all machina and large settlements, wherever they may be. Yu Yevon probably planned to have a degree of control over Sin, but most lore seems to point out that once he summoned it, he completely lost his marbles and attacked Zanarkand, as per his mission.

A Walking Spoiler who looks and sounds exactly like Tidus from X. But, as Lulu remarks when seeing his image, "...something seems a little off." 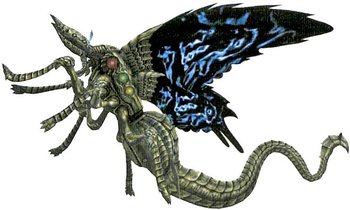 "What in Spira is that machina?!"
—Brother

A giant superweapon built during the Machina War and hidden underneath Bevelle ever since. It was never considered as a counter-measure against Sin for fear that it wouldn't be able to tell friend from foe once set loose in the world.