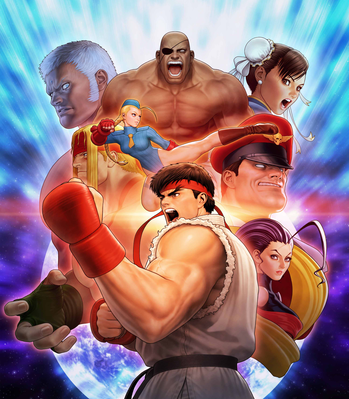 Outside of the main series, a DLC pack for Asura's Wrath has the title character going up against Ryu, Akuma, Oni, and Evil Ryu, also providing the possibility that Street Fighter takes place thousands of years after Asura's Wrath. Ryu also appears as a downloadable Guest Fighter in Super Smash Bros. for Nintendo 3DS and Wii U and as part of the regular roster in Super Smash Bros. Ultimate, where Ken joins in as a Moveset Clone and Guile is a summonable Assist Character. A number of Street Fighter characters are guest fighter in Power Rangers: Legacy Wars, which later lead to Ryu become an original Ranger himself (the Crimson Hawk Ranger). He would later be joined in Legacy Wars by Chun-Li, who also became a Ranger (with the decidedly mundane title of "Chun-Li Ranger"), which would then see both characters arrive in the fighting game Power Rangers: Battle for the Grid in their Ranger identities (with Chun-Li now going by the mantle of the "Blue Phoenix Ranger").

You must defeat my Shoryuken to stand a chance!