The cast of the second Ar Tonelico game, Ar tonelico II: Melody of Metafalica, takes place in the second tower, around which is situated the land of Metafalss. There are two or perhaps three primary factions: The Grand Bell that is currently in power, the Sacred Army that supports the former imperial regime and the goddess Frelia and her robots. 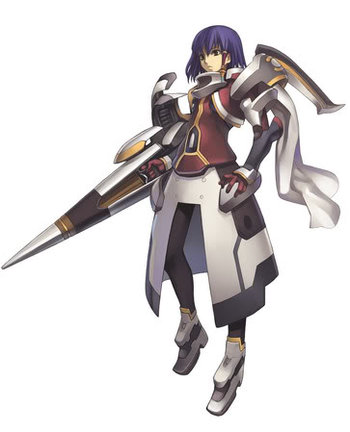 Croix is the protagonist of Ar Tonelico II and one of the knights tasked with suppressing rampaging Reyvateils infected with IPD. Though a less important position than Lyner's, he is known to be the sort of genius that only comes along once in a decade. He's calm and collected, though beneath that he can be Hot-Blooded. He's also sarcastic and insulting.
Luca Trulywaath 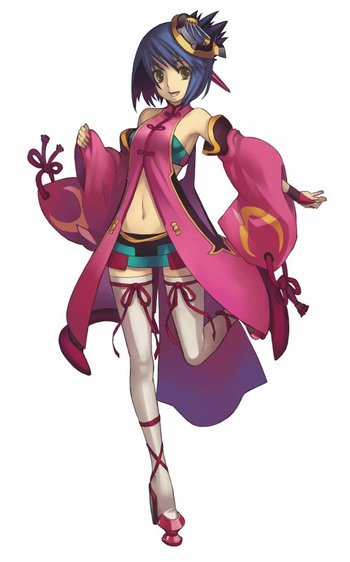 Luca is Croix's childhood friend and sort-of girlfriend at the beginning of the story, though he never comments on it. She has a distant relationship with her mother. Despite her calm, friendly attitude she has a tendency to rush into things and pursue her own agenda without telling anyone what she's really up to. 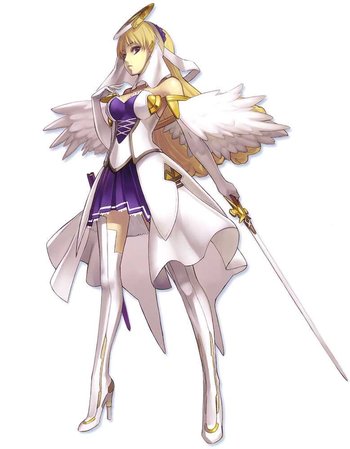 Cloche is the Holy Maiden of the current ruling party and is tasked with eventually singing the song Metafalica, which will create more land for the people to live on. She is distant and cold at times due to her upbringing, but she does have a nice side whenever there's something she can do for people. 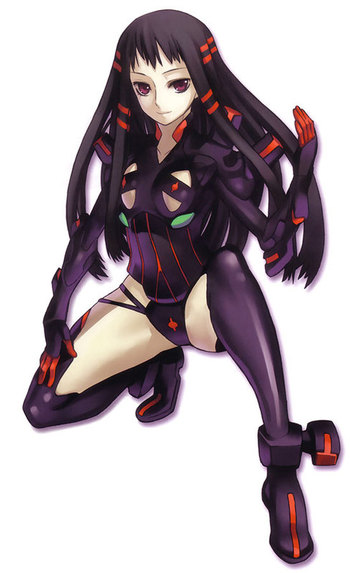 Jacqli is a mysterious Reyvateil who at the beginning of the game moves around inside a giant black robot. In truth, the robot is the one called Jacqli as she does not wish to give out her real name, though anyone who has played the original Ar Tonelico will quickly realize who she is. 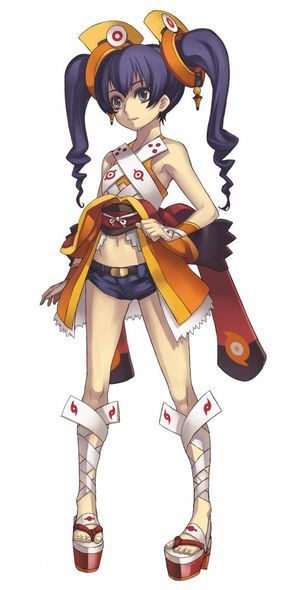 Cocona is Croix's little sister who he took in two years prior after her family died in an IPD outbreak. She's a reyvateil, but because she is only eleven she lacks the ability to craft songs properly. She loves Croix, so she wants to be useful and took up front line fighting. 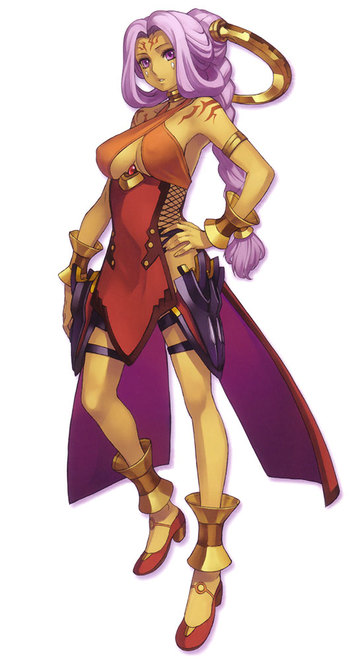 Amarie is an agent of the Sacred Army who travels with the group in order to investigate Luca on behalf of Chester, whom she loves. She is whimsical, but despite her slightly eerie appearance, she's rather nice. 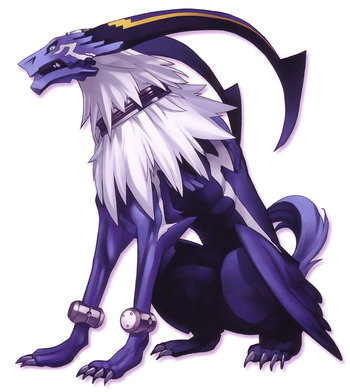 Shun is the primary guardian of Frelia and is largely unconcerned with the events of four hundred years ago despite being one of the few people still alive from that period. His only desire is to protect Frelia. He is known as the Divine Messenger and takes the form of a large blue wolflike creature, though he was originally human. 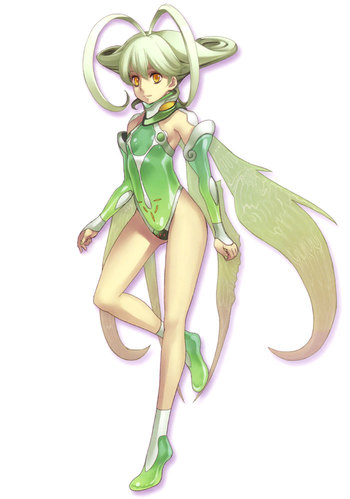 Frelia is the second of the Reyvateil Origin, meaning she is an immortal being treated like a goddess. Unlike the first Origin, Shurelia, Frelia's reputation is a bit of a mixed bag due to the scarcity of energy and land in Metafalss causing more conflict. The Sacred Army acts in her name while the Grand Bell that rules the country has declared war on her.

Targana is the crown prince of the deposed Imperial Family. At the start of the game, his whereabouts and actual identity are unknown to most, though he was friends with Croix when they were younger. He leads the Sacred Army.

Chester is one of the leaders of the Sacred Army and is motivated primarily by his love for Sonia.

Lakra is the identification system for IPD search and capture. She's also a half Teru girl stationed below Pastalia. 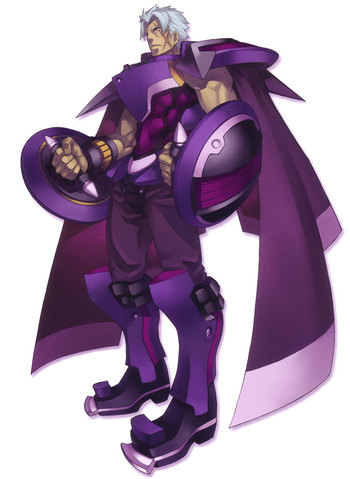 Leglius is the commander of the Grand Bell knights and a grizzled veteran with a highly dutiful nature. He is suspicious of Amarie as she is clearly a mole for the enemy, but is perhaps not as hostile towards her as he appears. He appears to know the truth of the events of the coup from twenty years ago, but out of respect for Reisha and Batz has kept his mouth shut.

Twenty years before the start of the game, Alfman threw a coup against the imperial family and seized power. He then reenacted The Plan to realize Metafalica and restore the land. Though Metafalica is the dearest wish of the people and his own sincere wish is to help the land, he's pragmatic to the point of extreme cruelty.

Laude is a strange, evil looking old man who kidnapped Lekya when she was a child. He holds an advisory position within the Grand Bell government even though he is known to be from another region entirely.

Sasha is a little girl who runs a small run down store on the border of Rakshek. She is extremely intelligent and so she's confused that no one else can read the ancient encrypted books she enjoys so much. She looks up to Luca and especially Cloche as big sisters. She is one of the four synthesis assistants and handles miscellaneous items, ingredients and bombs.

Cynthia is a weaponsmith who is obviously deeply in love with Croix, who refuses to take her seriously. She's an excellent smith and has strong intuition and ingenuity, but is also quirky. In particular, she views all her products as proof of her love for Croix. She is one of the four synthesis assistants and primarily handles weapons, armor and explosives.

Skycat is a waitress in Rakshek city and the last of the four synthesis assistants, generally helping to prepare food which tends to end up horribly mangled by the time Luca or Jacqli finish cooking it. For reasons unknown, she refers to Luca as her master and likes to flirt with her. Her real name is Lelina, but she asks not to be called that at work.

Spica is a mysterious individual that shows up in several games. She has a lot of contacts and information as well as quite the teasing, dark personality. In the second game she serves as one of the four synthesis locations where she helps craft potions, explosives, poisons and bath items. 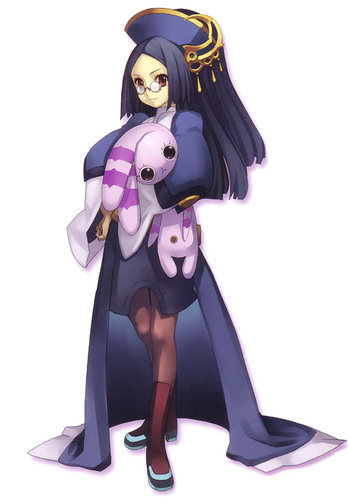 When Croix dives into Cloche's Cosmosphere, he runs across a strange little girl who acts as Cloche's Mind Guardian. She is rarely willing to share what she knows.

A Maiden from 400 years ago. Not much information can be found about her apart from her name and title until a certain point in the game. 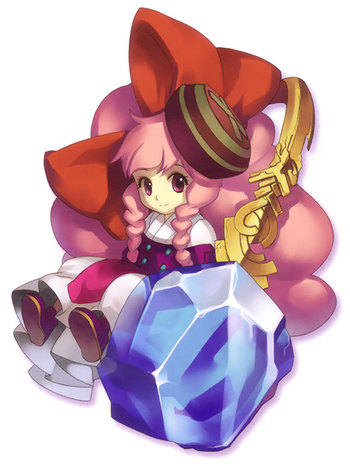 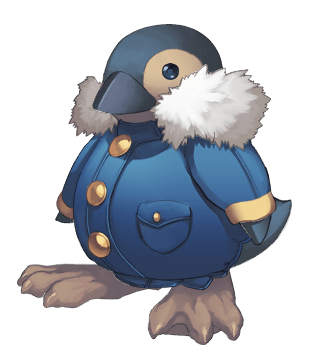 When Croix dives into Luca for the first time, he meets a small pink haired girl who introduces herself as Goro and claims that she is Luca's mind guardian. She's cheerful and helps Croix progress through Luca's cosmosphere, although she seems to hide something else... 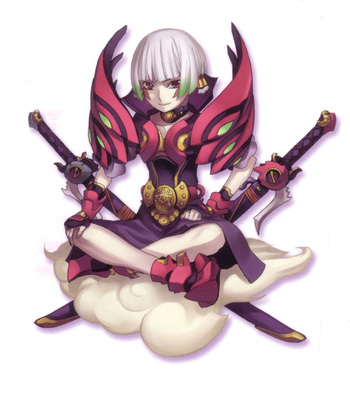 Ayatane is a small, thin man in Jacqli's cosmosphere who dispenses cryptic comments and serves as her Mind Guardian. He plays little role in the progression of events until the sixth level where he starts being more straightforward and helpful.

Reisha is the mother of Luca and Leyka, the little girl taken away at the beginning of the game. She and Luca have a strained relationship because Luca believes her mother doesn't care about her. It's clear that she does, however, but she won't show this side to Luca.

Raki and Reki are two robots in the service of Frelia. They share a design with Mei Mei and Kanade from the first game. They are both quite powerful and Raki in particular serves as a boss several times throughout the story. They are nearly indestructible.