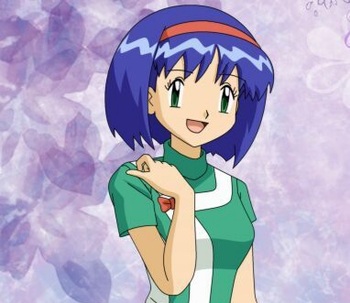 I love The Simpsons, Dougnote my favorite Nicktoon, Ed, Edd n Eddynote my favorite Cartoon Cartoon, Married... with Children, In Living Color!, Saved by the Bell, The Golden Girls, Jem, The Legend of Zelda (especially Link to the Past, Ocarina of Time and A Link Between Worlds), The Fresh Prince of Bel-Air, the James Bond films, Rocko's Modern Life, Nintendo, video game cartoons and a whole lot of other things.

I collect dolls (especially fashion dolls like Barbie), I love to read, write short stories, cruise thrift stores for hard-to-find old toys and films and go to plays, I love the majority of video game cartoons and I have a VERY active imagination. I'm proud of my imagination; it's gotten me through some rather rough and lonely times.

What else is there to know about me?

You'll see me creeping around every now and then. More to come soon...

Creator pages that I have made:

Works that I have created pages for:

Franchise Actor indexes that I have created:

Tropes that I have created/launched:

Works (and/or their subpages) that I regularly contribute tonote And anywhere you see an asterisk is a subpage I created: