Arrows on Fire
aka: Flaming Arrows 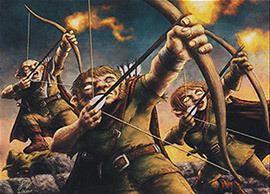 Creators of fiction generally agree that setting things on fire is awesome, so in military conflict, they love to depict archers shooting volleys of flaming arrows at the enemy regardless of whether the situation is a field battle, a siege, or naval combat. A Rain of Arrows looks cooler if the arrows trail fire as they streak through the sky, and it's especially cool when they're used at night so that they light up the air like laser beams. There is also a general assumption that any projectile that is on fire will inflict more damage than one that isn't. Whatever the arrows hit will catch on fire, be it tents, thatched roofs, wooden structures, or some hapless Red Shirt, who — in addition to being pierced by an arrow — will immediately burst into flame, writhing in panic before falling off the battlements with a Stock Scream. On a larger scale, military forces might also fire giant flaming projectiles from siege artillery such as catapults and ballistae. Lastly, sometimes an archer will shoot a single flaming arrow into the sky like a flare, signaling a message to distant units.

Much of this is unrealistic and is depicted that way for Rule of Cool. It's true that in real life, flaming arrows were used in certain situations where you needed to set inflammable structures on fire. However, fiction tends to ignore the drawbacks that made them unsuitable for anti-personnel use, least of all in a pitched land battle. To get them to burn reliably one had to wrap them in inflammable material and light them first, making them heavier, reducing their range, and slowing the archers' shooting rate because of the preparation necessary. Also, wrapping a cloth around the arrowhead or using an arrowhead with a cage behind the point to contain the incendiary material would blunt its ability to penetrate armor and kill people like a regular arrow is supposed to; wrapping the cloth some distance behind the arrowhead might improve its ability to penetrate a target, but then it might slip off or be less likely to set a fire. Also, the mere speed of the arrow's flight is often enough to douse the flame, so flaming arrows had to be fired at a slower velocity, making them less powerful and easier for enemies to dodge.

As a result, flaming arrows were practically never used in field battles like they are in fiction because they were less deadly to men and horses, as well as cumbersome and inefficient. Lighted arrows in real life were actually used to:

Therefore there is nothing necessarily ridiculous about them being used en masse to attack tents and wooden buildings or to try to panic a civilian population, but the trope gets taken to unrealistic extremes when they are always used in night battles even in situations where the lighting-things-on-fire factor would be a non-factor, such as when attacking a stone castle (except when the attacking army is in a position to shoot over the walls and there are wooden buildings on the inside — which there usually are — in which case it's justified). They would also not be able to set people on fire by hitting them like they do in the movies, since making arrows that rapidly inflammable is impossible without the modern petrochemicals they use for this effect in films.

Molotov Cocktails are the modern counterpart, though tracers can fit the "frighten enemies" and "adjust the aim" parts.