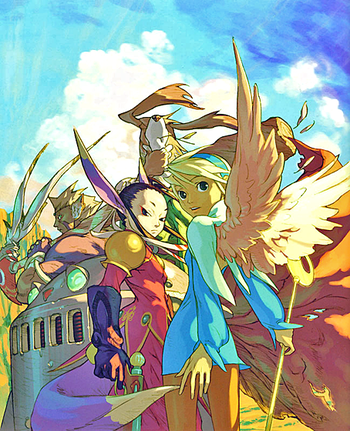 The fourth game in the long-running JRPG series Breath of Fire, released on the PlayStation in April 2000 in Japan and November 2000 for North America.

Nina, princess of Wyndia, departs with her childhood friend Cray to search for her missing sister Elina, who's also Cray's fiance. Along the way, they stumble upon Ryu, who doesn't remember a thing besides his name: Not who he is, or why he's stranded and stark naked in the middle of the desert.

Running parallel to Ryu's story is that of Fou-Lu, an ancient emperor who awakens in his burial tomb halfway across the world in the Fou Empire to reclaim the throne that he left behind 600 years ago. Unfortunately for him, those involved no longer want to give the power up to anyone, not even to an ancient god-emperor and founder of the empire.

As the story progresses and our heroes travel all over the world, it becomes clear that Ryu and Fou-Lu's destinies are intricately entwined and key to Ryu's memories.