The Primarchs from the Horus Heresy who lead the Legions that turn their backs on the Emperor.

Here you may add both characters from the Horus Heresy book series, and the Forgeworld series.

To return to the main Character page, click here.

open/close all folders
Advertisement:
Tropes applying to all of them
Fulgrim of the Emperor's Children 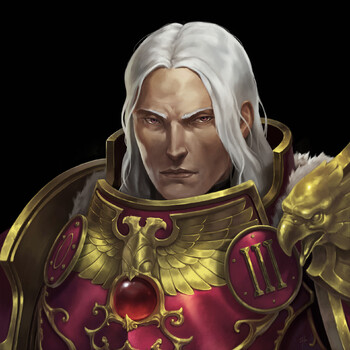 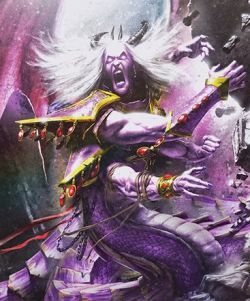 The Primarch of the Emperor's Children Legion. Stranded on Chemos, an industrial world which suffered from severe resource shortages, Fulgrim had managed to better the life of its population and became the world's leader peacefully. After being found by the Emperor, he easily took the mantle of warlord and led his Legion from the Blight to a new golden age. After falling under the influence of a daemonic sword he finds on Laer, he falls to Slaanesh and sides with Horus.
Perturabo of the Iron Warriors 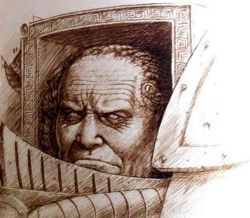 Perturabo's default expression. Can't imagine why.
The Primarch of the Iron Warriors Legion. Stranded on Olympia, Perturabo was gifted with an exceptional mind, already possessing all the scientific knowledge to be had, as well as a strange connection to the anomaly he would later christen the "Eye of Terror." He was found and quickly recruited into being the top general of Dammekos, the Tyrant of Lochos. Perturabo conquered Olympia for him, but then ousted him as soon as the Emperor came calling. Perturabo would then suffer indignity upon indignity, chief among these being made a warlord whereas he wanted to be an architect and engineer for peaceful purposes. He sides with Horus after years of frustration with the way his legion is relegated to constant siege duty, as well as the traumatic quelling of the rebellion of his homeworld Olympia.
Konrad Curze of the Night Lords 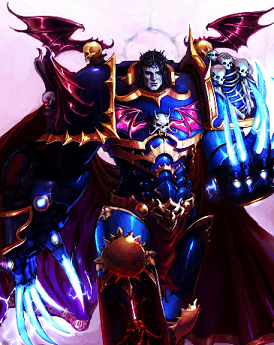 Nananananananana-nananananananana, KONRAAAD!
The Primarch of the Night Lords Legion and a peerless master of stealth and terror. Stranded on Nostramo, Curze lived alone and grew to be a vigilante who managed to terrify the entire population of Nostramo into becoming lawful citizens for fear of the "Night Haunter" coming for them. He was also plagued by visions of a grim future which made him into an unstable wreck. When the Emperor came to Nostramo and gave him the VIII Legion, Curze tried to become an enforcer for the Imperium, but he proved too extreme even for his fellow Primarchs. Put under censure, Curze readily joined Horus.
Angron of the World Eaters 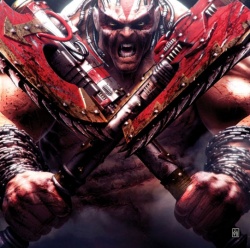 IT'S HARD TO CALM DOWN WHEN YOU HAVE NAILS STICKING INTO YOUR BRAIN!! Click to see his Daemon Prince form.

The Primarch of the World Eaters Legion. Stranded on Nuceria, Angron was enslaved by the planet's ruling class and made into a gladiator. When he refused to kill his adoptive father in the arena, the nobles mutilated his brain with the Butcher's Nails, although he managed to retain a modicum of restraint and honor even after being implanted. He eventually led a gladiator revolt, and his tiny army killed so many high-riders and high-rider armies that they became known as the Eater of Cities. When the Emperor came to him on the eve of the Eaters' last stand, Angron rejected his offer to join the Crusade, only to be teleported away from the Eaters of Cities' final battle, losing his beloved companions and having his heart broken. Indifferent to his Legion and hating the Emperor's guts, he quickly sides with Horus once the Heresy erupts.
Advertisement:
Mortarion of the Death Guard 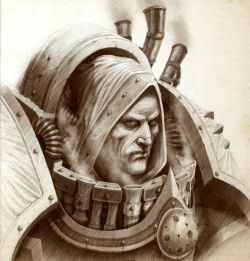 Rest assured, you do not want to smoke what he smokes.
The Primarch of the Death Guard Legion. Stranded on Barbarus, Mortarion became a "son" to a local lord, acting as his enforcer but then turning against him when he discovered he oppressed fellow humans. Mortarion led a successful campaign against the Overlords of Barbarus, destroying nearly all of them except for his "father". The Emperor arrived on Barbarus at that point and offered him a challenge: kill Necare himself, and Barbarus would remain free. If Mortarion failed, he would have to pledge his services to the Imperium. Mortarion took the challenge immediately, and very nearly succeeded, but the toxic atmosphere surrounding Necare's fortress overwhelmed him and the Emperor stole the kill. This caused him to resent the Emperor with a passion. Mortarion was among the strongest and toughest of the Primarchs physically, was a stealth expert and hated psykers, campaigning against their use among the Legions. At the onset of the Heresy, Mortarion quickly joins with Horus for political gains but his plan is soon overshadowed by Nurgle's influence.
Magnus The Red of the Thousand Sons 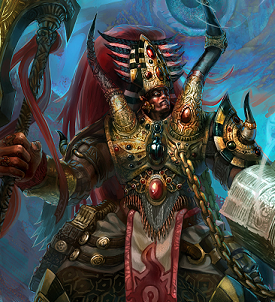 Magnificent Bastard.
The Primarch of the Thousand Sons Legion. Stranded on Prospero who fatefully had a population of peaceful psykers, Magnus quickly became the best of them and used his powers to reconquer Prospero from the terrible beasts that threatened the population. Initially loyal to the Emperor, he tries to warn his father about the impending betrayal of Horus, but his use of recently banned psychic powers causes the Emperor to send Leman Russ to arrest him, which Horus alters into termination orders. Cast out, Magnus sides with Horus.
Horus Lupercal of the Sons of Horus 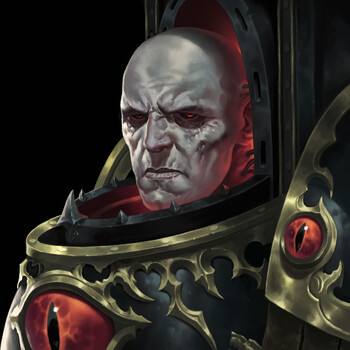 "And I looked, and behold a pale horse: and his name that sat on him was Death, and Hell followed with him."

The Primarch of the Sons of Horus, formerly known as the Luna Wolves. Stranded on Cthonia, Horus was found quickly by the Emperor and was raised by Him, with Horus developing a particular father-son relationship with Him. Once the Emperor's most favoured son, he was named Warmaster of the Great Crusade, but after being injured with a Chaos weapon and healed with a Chaos ritual in which he was tricked into believing the Emperor would betray him, he turns against the Emperor and launches the Horus Heresy, taking half the Legiones Astartes with him.

Lorgar Aurelian of the Word Bearers 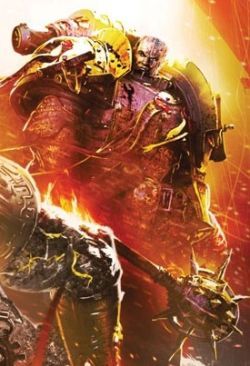 Hello! I humbly ask for a few minutes of your time to tell you the good word of Chaos Undivided.
The Primarch of the Word Bearers Legion. Stranded on Colchis who worshipped the Old Faith (a chaos cult in disguise), Lorgar became one of its most important preacher but then had visions of the Emperor, converting the world to His cult instead. For a time, Lorgar was religiously devoted to the Emperor but after the Legion had to witness one of their greatest work, the city of Monarchia, being razed to the ground while being forced to kneel to Him, Lorgar lost his Faith and studied the Old Faith further, uncovering the truth of Chaos. He then became the initial architect of the Heresy.
Alpharius and Omegon of the Alpha Legion 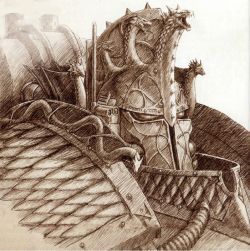 I am Alpharius. This is a lie.
The Twin Primarchs of the Alpha Legion. Little is known about them, but the twins both hide the fact that there are two of them and both are masters of lies, manipulation and the likes. Despite a reputation for trickery and deception, the twins are initially loyal to the Emperor, but upon learning that Chaos could be destroyed by allowing Horus to win, they side with Horus "for the Emperor".

It's the Alpha Legion, so here there be spoilers.