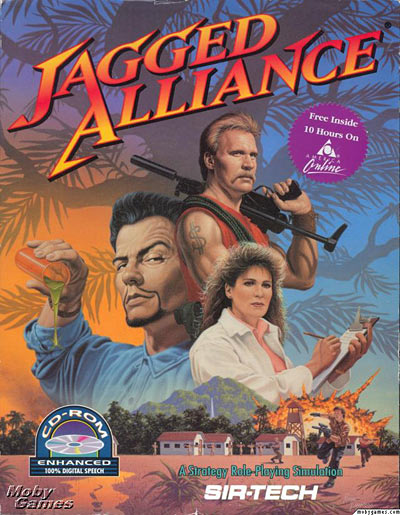 The ASSOCIATION OF INTERNATIONAL MERCENARIES, the most professional choice for commanders in need of a qualified hired gun.
— Jagged Alliance 2, AIM website.

A series of turn-based squad-level combat strategy games for the PC that came out in the 1990s, with some role-playing elements, financial management, and a weird and wonderful cast of mercenaries ranging from out-and-out maniacs to seasoned professionals (And in some cases, maniac professionals). Pick a modern combat trope, and they've probably used it shamelessly.

The first gamenote developed by the short-lived Madlab Software and published by Sir-Tech takes place on the South Atlantic island of Metavira, which was once a nuclear testing site during the Cold War. Because of radiation, some trees mutated into fallow trees, and their sap contains amazing medical properties that is every doctor's Christmas wish come true. Thus a research team led by Jack Richards and his daughter Brenda arrived on the island to study the trees and, if possible, reproduce them. But one day, the labs burned down in suspicious circumstances, and Lucas Santiano, a senior member of the research team, proposed to split the research team in two, arguing that two heads are better than one. Despite Brenda's objections, Jack agreed, and with his new found autonomy and authority he hired his own (literal) Redshirt Army, and took over most of the island to monopolize the sap-supplying business. This is where the Richards hire You to reconquer the island and to kick Santiano's ass with the help of Hired Guns provided by the Association of International Mercenaries, or just A.I.M for short.

The stand-alone expansion, Jagged Alliance: Deadly Gamesnote developed in-house by Sir-Tech, has you working for Gus Tarballs and accepting small-time mercenary missions. Eventually, the stand-alone missions tie together into thwarting the DFK, a high-tech organization whose plans involve using satellites for orbital superiority. As this game was made specifically for multiplayer (complete with map editor), all strategic elements were sacrificed for tactical ones; instead of overworld management, the campaign is a series of one-sector scenarios.

The sequel, Jagged Alliance 2note developed by Sir-Tech's surviving Canadian branch and published by TalonSoft takes place in Arulco. Hired by dethroned king Enrico Chivaldori, you and your band of mercenaries — from both A.I.M. and newcomer M.E.R.C. (More Economic Recruitment Center), which was founded by (surviving) ex-members of the former — are to liberate Arulco and to kill Enrico's ex-wife Deidranna Reitman, who usurped the throne a decade ago and ruled since then with iron fist of tyranny. Surprisingly well thought out and complex as computer games go in its approach to physical injury, fatigue, the effectiveness of firearms and the use of explosives and noted for its excellent Turn-Based Combat. Notably it's got a lot of mileage out of the v1.13 mod (a reference to the last official patch being v1.12 and, probably by coincidence, the last official versions of both original JA and Deadly Games), which drastically changed the game and even introduced a multiplayer mode that wasn't in the unmodified JA2! Some of the trope examples are due to, modified, subverted, or averted by this mod.

The sequel's stand-alone expansion, Jagged Alliance 2: Unfinished Businessnote Sir-Tech Canada's penultimate release, also published by TalonSoft takes place in Tracona. Ricci Mining and Exploration was the company that ran the mines in Arulco for Deidranna, and with her fall they lost them. Wanting to take them back, they set up a military base in the nearby military dictatorship of Tracona, gave Arulco an ultimatum to return the mines to [RMaE]'s ownership and launched missiles at the Prison in Arulco as a warning. King Enrico Chivaldori, knowing that Aruclo has not recovered enough to effectively deal with this crisis, hires you to resolve it. This game is very short, and the main draw of this game is the map editor, which was later added (along with other new features in this game, except the new mercs, unless you count the v1.13 mod) to JA2 in later patches.

Jagged Alliance 3 has had a troubled past, being announced, shown off at E3 '07, then dropped by Sir-Tech (who closed down in 2003). German publisher bitComposer has purchased the rights

to the IP, and have begun preliminary development. The game was targeted for a 2011 release.

Strategy First is currently working on Jagged Alliance social networking game in the vein of Facebook-type apps like Mafia Wars and FarmVille.

Kalypso Games and bitComposer Games released Jagged Alliance: Back In Action in February 2011, a real-time remake of Jagged Alliance 2. In August 2012 they released the sequel to BiA, Crossfire.

Gamigo and Cliffhanger Productions are working on the Jagged Alliance Online, an isometric tactical MMORPG.

Jagged Alliance: Flashback by Full Control, the makers of the 2013 videogame adaptation of Space Hulk, was officially released on 21 October 2014, having previously undergone a period in Steam Early Access. It is turn-based with elements from the 1.13 mod, taking place in 1991 depicting the origins of AIM. The Kickstarter

goal was reached, but those willing to donate further can do so on their site

A Spin-Off titled Jagged Alliance: Rage! has been slated

for a September 2018 release. Featuring survival elements, the game is again a turn based tactical shooter.