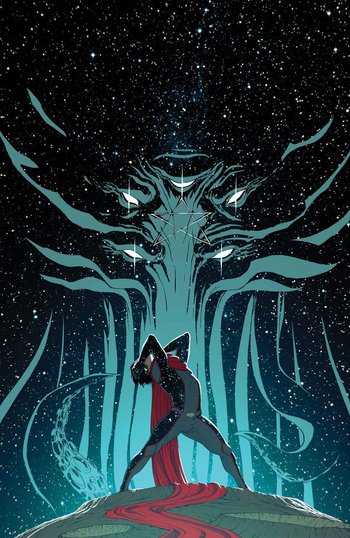 "See, I'm the child of a witch and an android. I'm their wish come true. Bigger than magic, living information, retro-reincarnated in human form. Now, my brother? He'd give you a physical fight. He'd warp time and space to punch you fifty times a second. But when I warp time and space... I use my words. And I say I'm a bigger deal in this reality than you are."

Along with his twin brother Tommy Shepherd —AKA Speed— Wiccan is the son of Scarlet Witch and The Vision. Kind of. Born separately to different parents, Billy (and Tommy) are actually the reincarnated souls of twin boys Wanda once believed she'd given birth to years earlier. So while they're not technically Wanda and Vision's biological children, they're their children in spirit... literally.

Billy's dubious parentage also makes the source of his powers —namely, reality warping like Wanda's— a mystery. He's not a mutant like she is (or was, anyway note as of a 2014 retcon, neither Scarlet Witch nor Quicksilver are the biological children of Magneto, and therefore not mutants), nor is he an android like Vision. The best theory anybody seems to have is that he's, simply, a pure magic being with natural sensitivity to the arcane.

Origin aside, Wiccan is most associated with the Young Avengers, where he met his boyfriend Teddy Altman, better known as the shapeshifting alien Hulkling. They're especially notable for being some of the first openly gay characters in all of superhero comics, and one of the first same-sex couples to share an on-panel kiss. Rarely apart from one another for too long, they eventually joined Sunspot's Avengers Idea Mechanics together, and Billy even lead a splinter faction of them during the assault on Pleasant Hill.

After a brief retirement from superheroics, Billy and Teddy eloped before the latter was sent off to serve as the leader of the new Kree-Skrull Empire. After the dust settled in their fight against the Cotati, Billy and Teddy had a proper wedding attended by virtually all of the Marvel Universe, with him becoming Emperor Hulkling's official consort.

In many possible timelines, Billy is shown to replace Doctor Stephen Strange as Sorcerer Supreme, as well as being married (with children) to Teddy. He also has fated dalliances with some of the universes's most nefarious threats, like the omnipotent entity known as Demiurge, and the parasitic wizard Moridun. He prefers not to think of them.