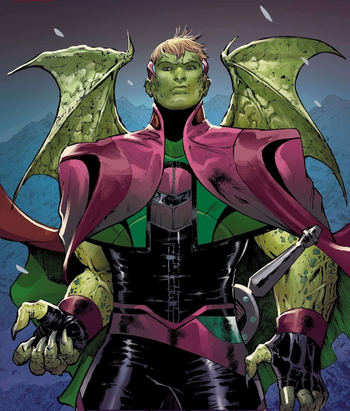 No relation to the Incredible Hulk.note He's actually the son of a Skrull princess and the original Captain Marvel.

The Young Avengers' shapeshifting powerhouse. The child of two warring empires. The wielder of the star-sword. The one true love of the Demiurge. The King of Space.

Raised by a single mother, Teddy grew up hiding a major secret about himself — namely, that he was a shapeshifter who could transform his scaly green body into any appearance he wanted. But that wasn't all...

Unbeknownst to him, Teddy was the secret love child of Kree soldier Mar-Vell (the original Captain Marvel) and Princess Anelle of the Skrulls, conceived during The Kree/Skrull War. To keep him safe, Anelle's handmaid took the child, and raised him on Earth as her son Teddy Altman.

During his teen years, Teddy became a founding Young Avenger, alongside Patriot (Eli Bradley) and Wiccan (Billy Kaplan), the latter of whom would become his longterm romantic partner — making them one of the first same-sex relationships in mainstream American superhero comics.

Together, Teddy and Billy would later join Sunspot's Avengers Idea Mechanics —later forming a splinter faction with Squirrel Girl, after getting kicked off the team— before (temporarily) retiring from the superhero scene to focus on their personal lives...

... until he was summoned by the unified Kree-Skrull Empire to be their new Emperor, to lead them in an attack against Earth. It soon turned out that he was actually trying to save Earth from the incoming Cotati invasion, helping the Avengers and the Fantastic Four fight them off with the combined Kree-Skrull forces. (But not before eloping with Billy in a hasty wedding ceremony.) When the dust settled, Teddy effectively became the king of space, and took Billy as his official consort with a proper wedding attended by virtually all of the Marvel Universe.