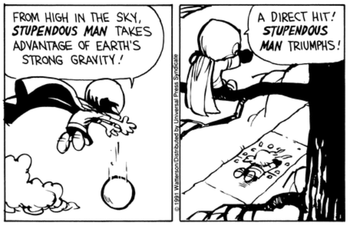 Wow, dropping a bowling ball-sized snowball from a tree on someone who's just minding her own business? Yeah, that's a very heroic thing for you to do.
"Hooray! The people whose names I know are saved!"
— Elan (while an allosaurus

eats dozens of unnamed mooks), The Order of the Stick
Advertisement:

It's only natural for a writer to see things from the protagonists' Sympathetic Point of View. Due to their frequent role as narrators and Point of View characters, a protagonist's perspective tends to make an impression on the work more than any other character's—their thoughts will overlap with narration, their feelings will shape the setting, and their priorities will dictate the plot. The way events are treated will be colored by how they relate to the protagonist, the things they love, the people they care about. It's hard to imagine a story told otherwise, but then sometimes this point of view seems to spread like an inkblot and color the way everything behaves and thinks. The work lapses into Protagonist-Centered Morality — a state where, on some profound cosmic level, the very fabric of the fictional universe seems to be seeing things from the protagonist's point of view. Every single sympathetic character, the symbolism, the narration, judge characters as worthy of praise, condemnation or indifference depending on how much favor they carry with the "good guys". The protagonists themselves can seemingly do no wrong, and even if there's anyone at all who would beg to differ, they're obviously a bad guy.

Suppose, for example, there is a character who slaughters innocent villagers by the thousands, but once helped save the mother of the protagonist or some other character simply because he thought she was hot; said character will easily forgive this guy, buy him a drink, and may even invite him to join the team. Then there is another character who routinely saves orphans from burning buildings who once used his resultant fame to woo away the Love Interest of the character. They will be an object of scorn as apparently her choice didn't matter at all. This alone would just be portraying a flawed hero (or a hypocritical villain if the character is evil) — the final piece of the puzzle is that the narrative is in on the myopia. There will be no warning signs that the protagonist is being unfair to the hero who saved all these people. No one calls them out on how disrespectful they're being to the memory of thousands of the mass-murderer's victims. This will not come back to haunt them. The protagonist is essentially acting as though, in certain respects, it really is All About Them, and the narrator Author Tract might well be agreeing.

As always, tropes aren't bad. It can be a very effective tool: a savvy author will use it beneath several layers of fictional content and context to tempt their viewers to agree that the protagonist has made morally sound decisions while allowing subtlety to display that, in reality, they have not. Conversely, by exaggerating the trope, they may tempt viewers to disavow seemingly morally bankrupt decisions of the protagonist, then allow plot developments to suggest that they acted wisely. Viewers who discover these nuances can learn many important things about the integrity of their own moral compass, and thus benefit. The example used by the author of the page quote above posits intentional Values Dissonance, and it's used for comedy: in that context, he succeeds.

This may be a generator of both Designated Heroes and Designated Villains, if the audience notices that the character is being judged only by a narrow section of their activities. Villains who supposedly "redeem" themselves in this manner can be Karma Houdinis, although they don't have to be.

Unfortunately, it can make the protagonist hypocritical in that the main character does something bad and gets away with it, while the other characters do the same thing and get punished for it. If, in an attempt to justify this, the main character's recklessness ends up not hurting anyone due to circumstances beyond their control, it's Moral Luck.

A specific type of Moral Dissonance which can lead to Aesop Breakage. Often enabled by Psychological Projection. Compare A Million Is a Statistic, where a million deaths can be excused, but a single death of someone with a name and screentime cannot. Also compare Always Save the Girl, in which the protagonist puts the well-being of their love interest above everything else. Subtrope of Selective Enforcement and supertrope for What Measure Is a Mook?. See also Rule of Empathy. Contrast What the Hell, Hero?, where another character does call the protagonist out on their questionable behavior, Moral Myopia, where a character tries to invoke this but the narrative disagrees, and Hypocritical Humor, where a character's double standards are Played for Laughs.

NOTE: This is an in-universe trope. It only applies when the story ignores bad things done by the protagonist, or good things done by the antagonist. If the story presents a character as a clear hero or villain, but some fans ignore the facts, that's Misaimed Fandom, Ron the Death Eater or Draco in Leather Pants.