The World of Remnant: Sanus (Eastern)

Remnant is a harsh landscape inhabited by the Creatures of Grimm that dominate the skies, land, and oceans. There were once many kingdoms scattered across the continents of Sanus, Solitas and Anima. However, most have fallen to the Grimm, leaving behind only four survivors. By combining technological advancement with local topography, civilization flourishes within the protected boundaries of these four kingdoms.

The kingdom is named after its capital city, but includes a number of other cities positioned further south along the north-west coast. The elite Huntsman Academy that protects the kingdom is Beacon Academy and one of its main feeder schools is Signal Academy. 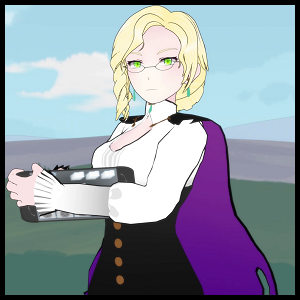 A Huntress and teacher of Beacon Academy that comes to Ruby's rescue in the first episode. A member of Ozpin's secret circle, Glynda fights with a riding crop named Disciplinarian and her Semblance "Telekinesis", which allows her to move objects with her mind and even fix objects that have been broken, as if she's rolling back the clock to a pre-broken state. 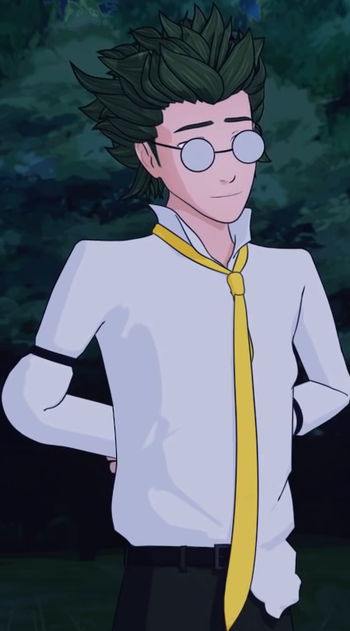 "As a teacher, I can take knowledge — the most powerful weapon of them all — and place it into the hands of every student that passes through my classroom."
"History is important, gentlemen! If you can't learn from it... you're destined to repeat it."

A professor who teaches history, such as the ancient wars and the civil rights struggles of the Faunus. Apparently he has a PhD. He fights with Antiquity's Roast, a coffee thermos that extends into a full staff that can emit flames.

Debut: The Badge and the Burden* Volume 1 Episode 9 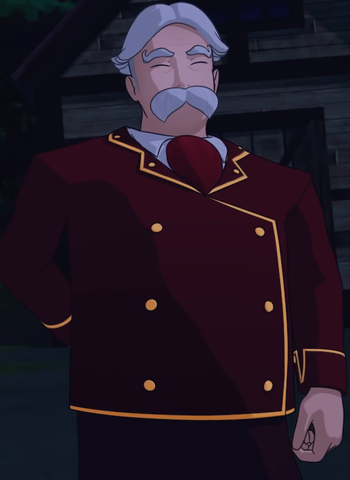 A professor and former Huntsman at Beacon Academy who lectures about the Grimm. He fights with a blunderbuss-axe hybrid named Blowhard.

A well-respected team of older Beacon students, whose late return home from a mission fighting Grimm results in Yang and Weiss being given responsibility for organizing the school ball. They debut as a full team in the Volume 2 finale when the Grimm successfully breach the city's defenses.

After the Battle of Beacon, their story continues in the novel RWBY: After the Fall. 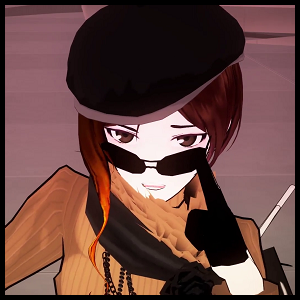 The leader of Velvet's team and fellow Beacon Academy student. She fights with Gianduja, a purse that can transform into a minigun. Her Semblance "Hype" allows her to amplify the effects of Dust in an area around her. 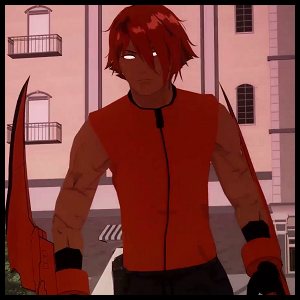 A member of Velvet's team and fellow Beacon Academy student. He uses martial arts to fight with a pair of wrist-mounted blades named Sharp Retribution. His Semblance is short-range telepathy, letting him keep up mental conversations with his allies. 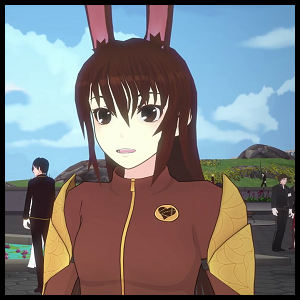 "Be safe, okay?"
"Most people don't know what it's like on the battlefield. I mean, even experienced fighters can get scared and start seeing things. If it happened to Coco, it can happen to anyone."

A rabbit Faunus attending Beacon Academy who dabbles in photography. Monty Oum held a contest where fans got to decide what her battle gear design would be. According to Monty, she is an experienced mage for her team and is very agile. Her weapon, Anesidora, is a camera that can convert images into hard-light projections using Dust. She combines this with her Semblance "Photographic Memory", which allows her to perfectly recall a subject's fighting style from memory. 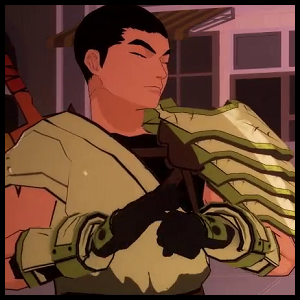 "I can't promise you'll leave without a scratch."

A Beacon Academy student, he is the tallest member of team CFVY and one of the tallest characters in the show, fighting with a massive zweihander named Fulcrum. His Semblance allows him to induce amnesia, with the effect taking more memories (and taking longer to regain those memories) the longer he can maintain it, although he may only be scratching the surface with his Semblance.

A team who join Beacon Academy in the same year group as Team RWBY; they're introduced as the school bullies and make life difficult for both Faunus and any humans they take a disliking to. 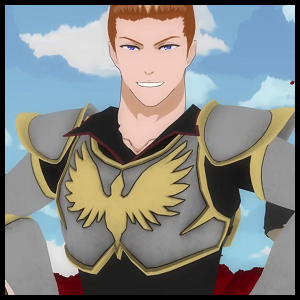 The leader of Team CRDL, who fights with a mace named The Executioner that can project Dust. 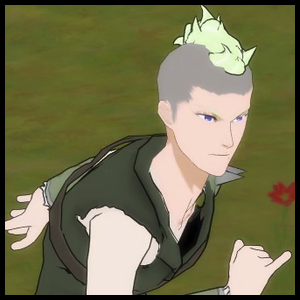 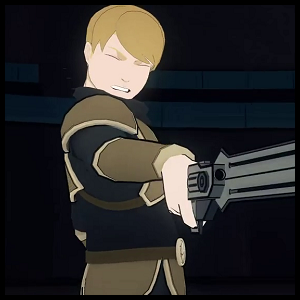 A member of team CRDL who fights with a gunblade called Hallshott. 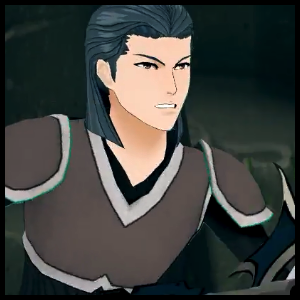 A member of team CRDL, he fights with a halberd named Feather's Edge.

Debut: Round One* Volume 3 Episode 1

"Well, normal is what you make of it." 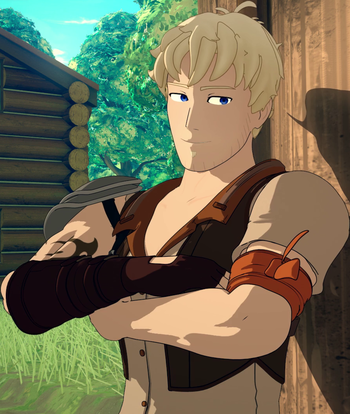 "I'm just glad to have my girls back at home." 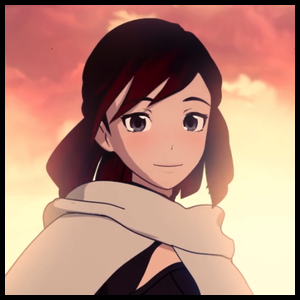 The mother of Ruby and stepmother of Yang, Summer was a huntress who travelled a lot on missions. She was a member of Team STRQ with Raven and Qrow Branwen, and also Taiyang Xiao Long, the father of both Ruby and Yang. One day, she never returned from the mission she was on. 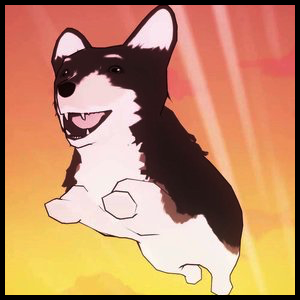 Ruby and Yang's pet dog that their father, Taiyang, sent to them to take care of while he's away from home himself. Lives with Team RWBY. He looks like a black, white and tan corgi. 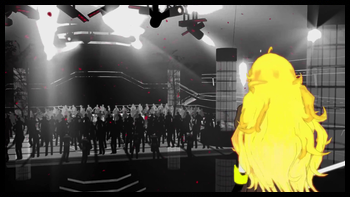 Run by Junior, the club is a front for mobsters and is frequented by criminals and information-seekers. 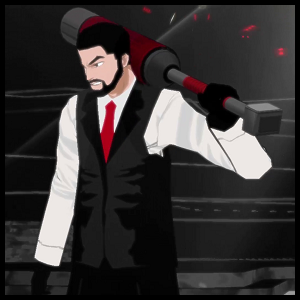 "Aren't you a little bit young to be in this club, Blondie?"

A man whom Yang meets in a club and interrogates in the Yellow Trailer before he and his minions fight her.

Junior's weapon transforms from a bazooka capable of simultaneously firing multiple rockets into a club for when closer combat is needed. 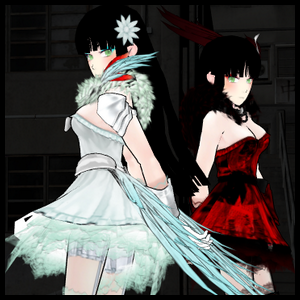 "What-Ever."note Melanie on your left, Miltia on the right.

A pair of black-haired twins that Yang encounters and fights in a nightclub during the Yellow Trailer. 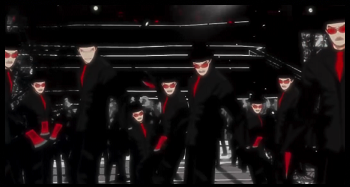 These are tuxedo-wearing criminals who are on the payroll of Junior and work at the club he runs. These men wear black suits, black hats and red ties, armed with red axes and swords. Torchwick hired several of them to aid in the robbery of From Dust Till Dawn in episode one.

A powerful crime lord that controls the underworld in Vale, maintaining a "working" relationship with the Council and Police. He is frustrated by Roman Torchwick's activities in Vale, and has little respect for his son, Junior. 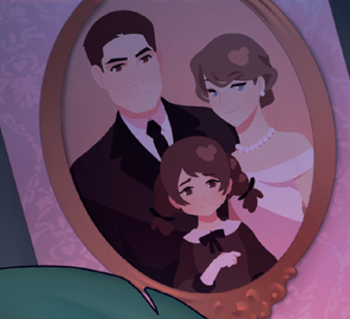 A prominent family in Vale, Jimmy is a city manager for Vale City Council, who has considerable political and business connections. His wife is Carmel, a meek and submissive socialite who supports her husband's endeavours. Their daughter is Trivia, a child they do their best to keep out of the public glare.

Preferring to go by the name "Lady Beat", she is a tall, imposing woman whose academy teaches young women how to function in high society. There are many graduates of her school throughout the city, from criminal organisations to government office, and everything in between. 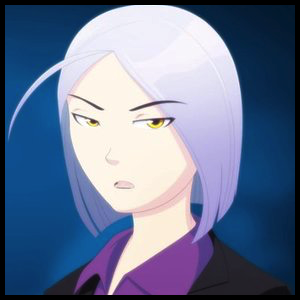 A reporter first seen in episode 1 covering the Faunus Civil Rights Protest being disrupted by the White Fang. 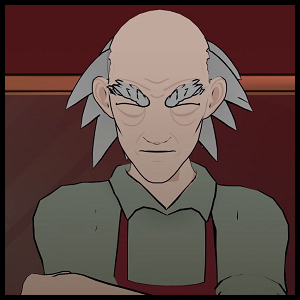 A recurring character, he is an old man who runs the shop "From Dust Till Dawn". 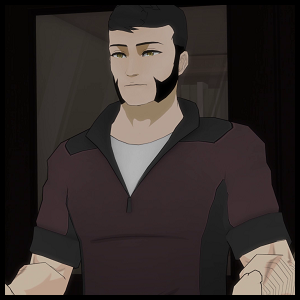 "Welcome to Tukson's Book Trade, home to every book under the sun! How can I help you?"

A pair of Huntsmen who graduated from Haven Academy before moving to live in Vale.